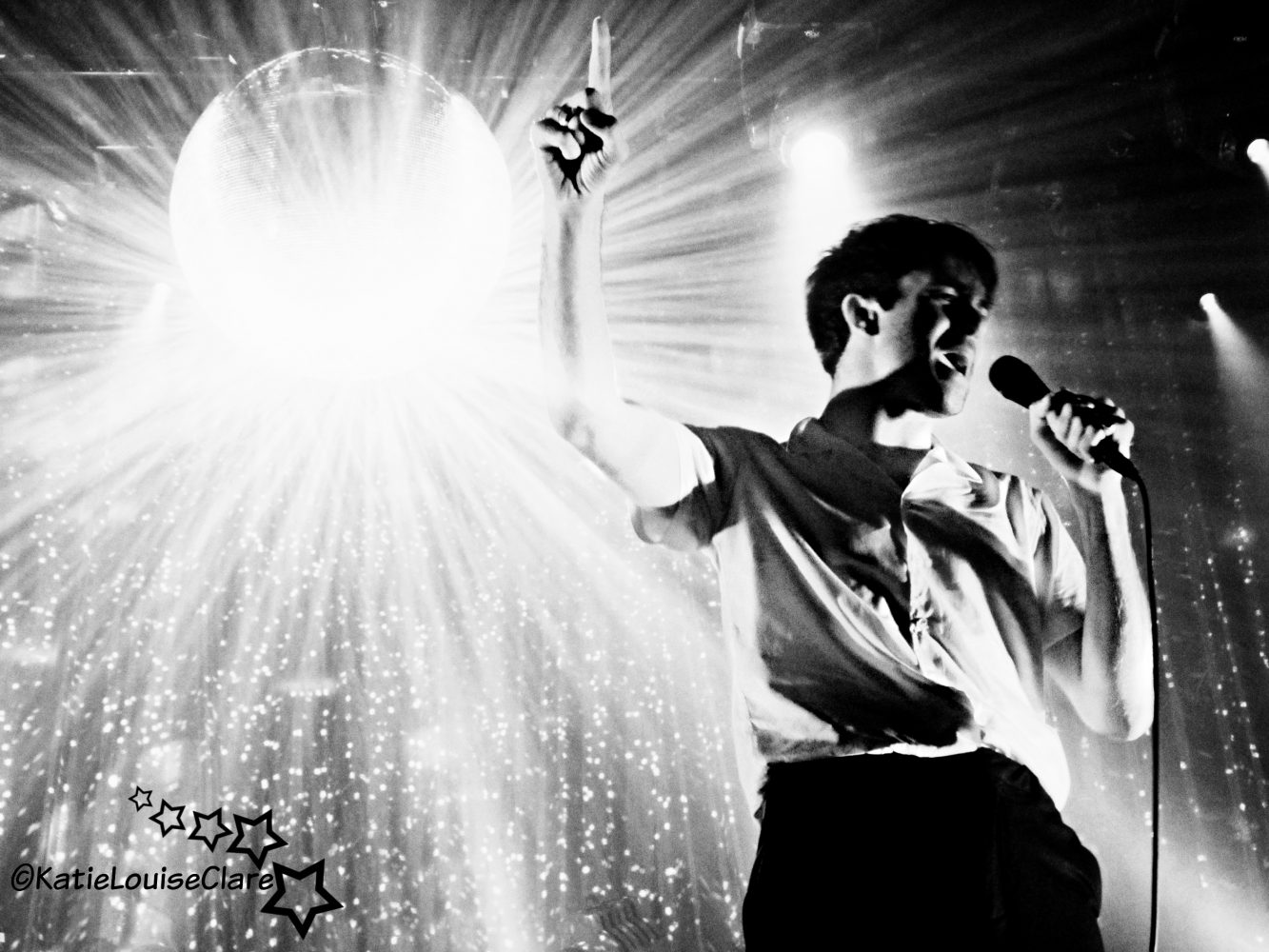 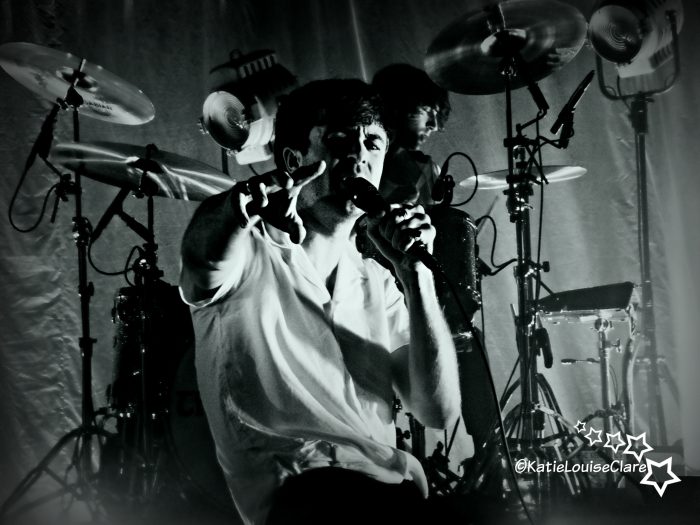 Through seven years, four albums and more live dates that you’d believe The Vaccines have run a successful marathon with mere minor and infrequent stumbles. A seemingly bigger hurdle being Pete Robertson’s exit mid-2016. Recovering they recruited drummer Yoann Intonti whom joined for a long weekend and never left. They enlarged and reinforced their team with keyboardist Tim Lanham and so 2017 finds The Vaccines energised and strengthened ready to continue moving forward. Louder Than War sent Katie Clare to their Manchester, Academy date to see how the band deliver as a five-piece.

Opening the evening with lashings of attitude, punk rock and feisty pop gloss Dream Wife provide an enjoyable yet sharply weighty set. The quartet relishes their time on stage, delivering their woke 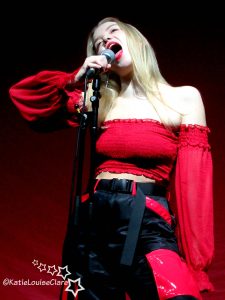 millennials riot girl manifestos via catchy choruses and a performance full of joyous spontaneity. Dream Wife creates tracks with a viewpoint; an almost anthropologist contemplation particularly distinct on songs like Somebody and Lolita. Closing with FUU highlighting sexual harassment at gigs Dream Wife splice a Spice Girls refrain with the lyric ‘Gonna fuck you up, Gonna cut you up’ with such vividly unashamed merriment that for that alone they deserve further consideration.

Taking on the strains and stimulation of recording together the five musicians, surviving emerged with Combat Sports. An album that continues The Vaccines high quality distinctly flirtatious punk- indie rock melees, it simply explodes with excellence: well what else would you expect from The Vaccines.

The Vaccines take to the darkened stage together the lights come up and with industriousness, they burst through Nightclub a less than perfect indie anthem, from Combat Sports, is half drowned in the reverberating cheers and screams that bounce from the Manchester, Academy walls. The affection for the past is a never in doubt as Wrecking Bar takes the welcoming roar and moulds it into the familiar echoing of lyrics that could now never be forgotten.

Displaying the distillation of what he denies in every movement and with every word Justin Young croons “I’m no teenage icon” adds with reticence filled tones “Reserved and shy your average guy, No, piercing stare, Just out of shape with messy hair”. Their self-effacing yet defiant and The Vaccines antithesis in effect:  a delicious fusion of contraries. Dream Lover and Wetsuit follow the band all in fine form. Yoann Intonti arms cyclonically producing solid rhythmic foundation to each track. Intoni occasionally throwing in the drumming equivalent of a wheel spin and other elegiac tricks. “It’s not much like a Monday night in here Manchester” Young sharing an observation: setting off a wave of various chants around the packed audience as he smirks his way into Melody Calling.

“We have a new album called Combat Sports. We are very proud of it, we are very excited its out and we are very excited to be playing these new songs from Combat Sports. One of our favourites now if you don’t know the words you can just bounce up and down like you do Manchester,” Young advises as they glide into Your Love Is My Favourite Band its theatrical middle eight wrapped in synth-pop, these new tracks brilliantly showing off Tim Lanham skills. 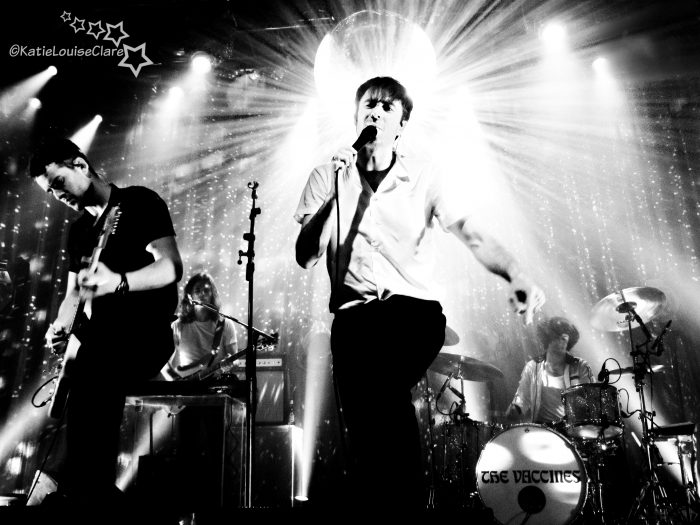 Displaying an almost never-ending range of emotive facial athletics Young provides his best snarls and sneers through Bad Mood. The duelling spectres of self-absorption and self-doubt are shared via intermingling metaphors that the audience singalong not missing one infliction through Post Break-Up Sex, Nørgaard and A Lack of Understanding. Young hypnotizingly scowling, as fervent lips synchronize his questioning debate “Are you ready, are you ready, are you ready for this? Should I shake your hand or should I give you a kiss?” lurching around the stage avoid stage collides with both Freddie Cowan and Árni Árnason who are providing perfection and much appreciation is shown when one or the other steps toward the front of the stage.

A triple track encore No Hope, Put It On a T-Shirt and All in White the crowd’s elation remains substantial throughout. The Vaccines not only never fail to deliver they do so with sophistication, finesse and open hearts which is reciprocated by each person in the room long may they and what only they can do continue.

Tickets available from the usual retailers. Some dates are Sold Out please consider Twickets a fan to fan face value secondary ticket option.

The Vaccines will also be appearing at:
Live At Leeds 2018, Latitude 2018 and Benicassim 2018. For further information and details visit The Vaccines official website and Facebook page.

Combat Sports (CD, LP, DL) (Columbia) is out now and The Vaccines own store has a raft of different bundle options including signed vinyl and CD’s