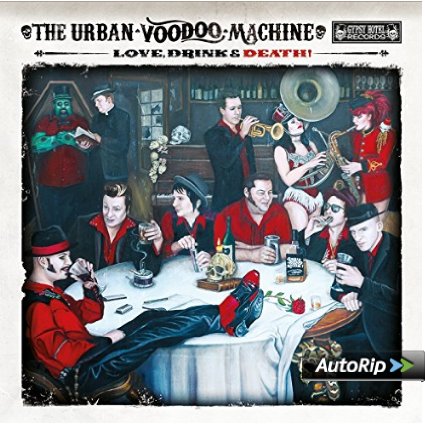 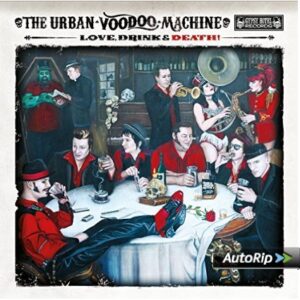 The Urban Voodoo Machine release their third album, but does it live up to their past efforts? Louder Than War’s Martin Haslam thinks it does.

Originally considered something of a novelty/joke band by some (in part due to their image; the ‘Late J-Roni-Moe’ in green body paint), album number three, or four if you count ‘Rare Gumbo’, sees The Urban Voodoo Machine established as one of the most entertaining and show-stopping live bands in the U.K. Sure, they don’t take themselves too seriously, no egos here, but the music is another matter. Their range of songs has grown steadily and ‘Love, Drink And Death’ is a confident and assured album that has fun without forgetting the tunes or passion.

‘Your Hour Of Darkness’ opens up with a nifty rockabilly tempo a la Johnny Cash with added horn section and fiddle. A guaranteed live cracker. Things slow a little for ‘Pipe And Slippers Man’, already a singalong part of their live set, while ‘Crazy Maria’ brings the latin rhythms to a true-life story of a dubious death. In other hands, this could easily be cheesy or awkward, but the UVM have been doing this for so long and have devoted themselves to their troubadour life fully, so it’s actually lively and moving. Quite a feat.

‘Captain Of A Sinking Ship’ sounds like a jollier Captain Beefheart; one you’d actually like to hang out with, then ‘Not With You’ adds a sombre tone. Maybe that’s the sousaphone? It ends up as a gypsy-infused, boozy singalong. Yes; a lot of their songs are made to sing along to. If that’s not your thing, leave now. If you see them live, you will have no choice but to join in.

And here comes another! ‘Train Wreck Blues’ couldn’t be simpler. An infectious toe-tapper, and the first here to feature founder member Jim Jones joining the vocal melee and some neat licks from Steve Conte.

‘Don’t Mess With The Hat’ enters a light, jazzy territory. Paul-Ronney Angel has a way with a well-turned titfer. Respect the hat. Some nice playing here by guitarist Nick Marsh, prior to his diagnosis of throat cancer. He is thankfully back in the fold for their tour (Bedford review coming soon, folks). They were a blast there last year.

‘Loretta’s Revenge’ is a slow, brooding lament. She swaps her wedding ring for a shotgun; it’s not gonna end well. In summary, treat your woman right. ‘Drinking My Life Away’ breezes through quickly like their first round, then ‘Nothing To Me’ and ‘Sharkwaters’ darken the mood; the latter featuring Mr Jones again and wouldn’t have sounded out of place on The JJR’s last album. Sparse piano chords and gang vocals.

‘Jimmy Cuba’ is essentially ‘Tequila’, ‘Hid The Bottle’ probably wrote itself, given Paul-Ronney’s love of a livener, but is infectious nonetheless, while ‘Help Me Jesus’ features the unmistakeable vocals and guitar of Wilko Johnson. What more do you want?

‘Goodnight My Dear’ wraps things up, at the fag-end of closing time, by the sound of it, before the ending outro of ‘The Urban Voodoo Machine’s Second Line’. If you like the idea of ‘bourbon-soaked gypsy blues bop n stroll’ and can handle your music with a smile on it’s face, jump on board with Paul-Ronney Angel and his rather merry band. You’ll be in good company.

All words by Martin Haslam. More from Martin can be found over at his Author Archive.