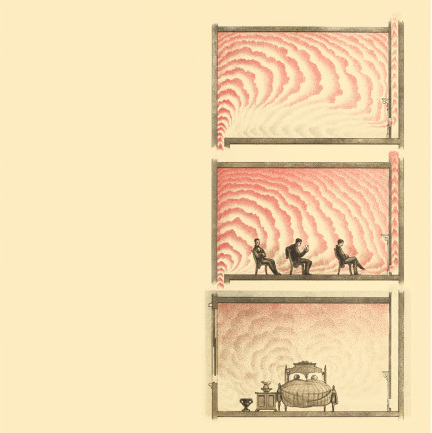 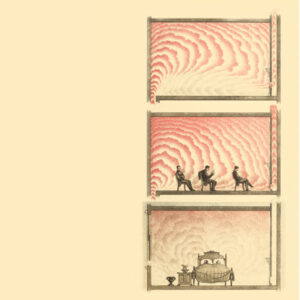 Sons of Ishmael former front man returns with a clash of hardcore and mountain music. Nathan Brown says it gives oft needed variety to a genre that can be guilty of being overly generic.

Do you remember the Sons of Ishmael? They were a Canadian hardcore band who I can recall hearing on John Peel in the late 80s and I remember seeing their name on at least one UK distro list. Their Hayseed Hardcore 7″ even made it into Pushead’s Top 100 of the 80s listing in 1990 when he finally called it a day writing the Puszone feature for Thrasher skate magazine. Perhaps the peak of their fame? They delivered up fast short bursts of hardcore not too dissimilar to early DRI.

This new project, The Uncommmitted, features Tim Freeborn, vocalist of said Sons of Ishmael. The man has not mellowed with age! The shouty vocals are a continuation of his earlier work. The overall sound of The Uncommitted also bears some similarities to Sons of Ishmael but is in no way a carbon copy. They have short songs (20 in 14 minutes). Drums, guitar and bass all play at a sprint.

With the benefits of modern technology this has far clearer production than Sons of Ishmael and there are a few surprises. Lap steel guitar being one of them. It doesn’t sound out of place (in much the same way that it didn’t sound out of place for the Damned to have slide guitar on One Way Love) and in fact it adds to the depth of the record.  Let’s face it, over the years, there have been a fair few hardcore albums that pretty much repeat one song 15 times over as if the drill sergeant on the microphone is trying to batter you into submission. “Yes, okay, whatever you say, just stop shouting at me…please!”. Don’t get me wrong. There is nothing wrong with a shouty man in the corner and his fast angry band. But a bit of variety goes a long way. Less is sometimes more. You get a brief respite for your brain to start processing things a little and when the next assault starts it sounds all the more intense.

Listen to Torn by The Uncommitted on the label’s album page.

The variety presented by this record is refreshing as, alongside that hillbilly slide guitar, shades of early punk bands and pre-punk bands peek at you from among the thrash. Wire, The Damned, 999… yeah, the ones who played fast way back in the early days…maybe there is even a bit of MC5 (or is it Hendrix?) in some of the guitar work. So we find the Uncommitted lurking at that lonely mountain crossing where the roads to hardcore, punk and bluegrass meet.

The songs tend to have interesting intros drawing on different genres before settling down to the 30-60 seconds of relentless hardcore, ending on an abrupt stop. I love an abrupt stop.  I like a record that is stripped back and not over-produced.  The odd song has a break down in the middle, like Don’t Wake Me with its funky bass line and atmospheric steel guitar or Fail Is Me where the fist pumping catchy chorus drops out into an AC/DC or Lynyrd Skynyrd style guitar break before going round the track again.

More traditional music forms can be felt here and there. If Czolgosz Was An Onanist takes a standard 12 bar rock’n’roll format and delivers it at high speed, giving the feel of an MDC song but with more gruff vocals. ’68 Comeback is more mid paced and features an almost psychedelic deployment of that lap steel guitar. The Dusk of Nations starts like a folk song on speed, before the hardcore riff kicks in. Other stand out tracks include the opener, Omnicide, which kicks off with the tempo changes you’d here in early Wire then My Name is Earl style slide guitar before settling into full on shouty hardcore song, and a cover of Nothing by The Fugs.

The song matter is generally as bleak as a prairie in winter with titles and lyrics that are either hilarious or from a sick mind. Pretty much what I want from punk bands. From the opener Omnicide to the suicidal venting of Ole, The Styx and I Want To Euthanize Myself. From Best Hell to The Pleasures of Geophagy. (I had to look geophagy up, it’s an eating disorder in which an individual ingests earthy substances, such as chalk,soil, mud and clay.) Humanity and society also get a well earned kick in the nuts. Punk is meant to make you feel uneasy rather than comfortable. The only worry is whether this is nihilstic angst or a blueprint from a man with a stockade full of guns on the edge!

The record label Never Met A Stranger really interests me. They are two artists who have been doing fieldwork recording Old Time Musicians in Central Appalachia and you can view films of these musicians on the website. They will be publishing a book in the spring that looks at landscape and industry and musical traditions in the US. As they both grew up with hardcore they have the DIY aesthetic. They do the recording, mixing, design work and even have a close friend to do their mastering. They self fund everything and see the label as a labour of love. Fusing the old with the new, it seems quite fitting that the cover art for this album uses illustrations from 1700 and 1869.

This will appeal to fans of fast hardcore bands like MDC (not quite at Los Crudos speed though!). If you like early work by thrashers Corrosion of Conformity, DRI and Attitude Adjustment before they let the metal completely take over it will appeal to you. The hardcore sensibilities and angry vocals point to faster songs by Youth of Today and modern hardcore bands like fellow Canadians Career Suicide. That should be enough comparisons to whet the appetite. If you’re interested, head over to the label’s site to order a copy.