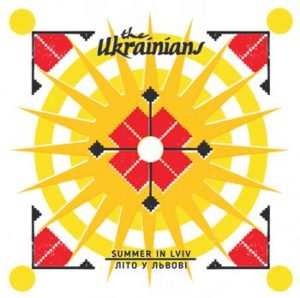 Louder than War’s Ioan Humphreys falls back in love with the simple joy that is The Ukrainians.

I’ve been a fan of The Ukrainians since I picked up a bootleg cassette of theirs at a Wedding Present concert around 1991. I played it to death, completely enraptured by the pace and delivery of the folk music delivered almost in a punk style that I’d never heard before. Fast forward a few decades and The Ukrainians have a brand new album out called Summer in Lviv. This release also coincides with the 30th anniversary of the release of The Wedding Present’s three legendary Peel Sessions that they did as The Ukrainians.

The Ukrainians created their intoxicating cocktail of traditional Ukrainian music and British Indie pop even before the term ‘world music’ had been coined. A jam session during the rehearsals for a Wedding Present Peel Session which saw the band, inspired by their Slavophile guitarist, Peter Solowka, playing a Ukrainian folk song, caught the ear of John Peel who suggested an entire set in the same style. Recruiting friend of the band and fluent Ukrainian-speaker, Len Liggins to contribute vocals (relegating Gedge to backing vocals and guitar), they formed a musical partnership which enthralled indie fans. Such was the positive reaction, The Wedding Present recorded two further John Peel Sessions of Ukrainian music for the BBC in the 1980s, resulting in the first and only release of a Ukrainian language record by a major record label. This record was released exactly three decades ago and reached number 22 in the national album charts. In a way unthinkable in the modern musical age, Solowka and Liggins’ fully-fledged band which sprang from this chance occurrence now celebrates 30 glorious years.

Summer in Lviv is based on guitarist Peter Solowka and vocalist/fiddle player Len Liggins’s experiences in western Ukraine last summer, where they discovered the rejuvenated, modern, vibrant and forward-looking city of Lviv, whose official motto is ‘Live, work and enjoy yourself’.

Living in the west but with half the band having a background rooted in the cultures of Ukraine or eastern Europe, The Ukrainians have enjoyed huge success over the past three decades, not only winning the adoration of mainland Europe but becoming the only band to ever enter the official UK charts with a Ukrainian language track. Furthermore, their music is infused with an excitement that draws on both Ukrainian folk music and western rock music, which together create a sound that is fresh and exciting as traditional instruments interweave with pounding drums and zizzy electric guitars.

Coming back to the lead single Koly Ya Tantsyuyu and wow what a bass throb this track has weaving though it! The mandolin comes in and drives the whole track. The fiddle comes in as well as the immediate vocals and the whole composition is complete. It’s 100mph folk punk, but with a heart breaking chord progression that has its soul in the Ukrainian heritage. Once again I feel I’m listening to something very special and unheard and experienced by the vast music listening population. And once the noisy mandolin/guitar solo is over I’m completely in love with this band once again.

To label them under the ‘folk rock, Folk punk, etc’ label almost feels like a disservice to the band. What they bring to the table is an energy and creative force that some bands could only dream of. It’s the musicianship of this band that astounds me and I can’t wait to get my ears around the rest of the LP. Simply wonderful and immensely enjoyable music. There are no other superlatives available for The Ukrainians.

The 30th anniversary re-issue, The Complete Ukrainian John Peel Sessions was released on CD and 12-inch vinyl LP in April 2019.

The Ukrainians will be touring Summer in Lviv throughout summer and autumn 2019.