Home Blogs The UK is in the middle of best and biggest breakout of... 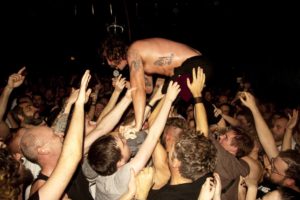 Anyone left awake out there cannot have failed to notice the biggest shift in inventive and gloriously noisy British guitar music since post-punk. The UK is in the middle of the biggest wave of homegrown bands for decades.

First things first this is no attempt to corral the recent high octane action into any kind of spurious ‘scene’. Were hate the idea of scenes and celebrate IDLES own taking down of anyone who attempts to lump them in with punk.

IDLES are totally correct here – there is nothing more boring than looking for a ‘new punk’. That was a brilliant necessary moment in time a million years ago which changed our lives. The whole point of punk was not to hang around like a nagging parent waving its finger at its grandchildren telling them it was ‘better in my day’ but you can have a version of my culture.

This desperate bunch of bands share an audience, are unrelated, make a glorious racket, speak about our lives and have no sense of linear ‘scene’ movement. And that’s perfect for me.

This year we have seen bands like IDLES and Fontaines DC score top 10 albums. It’s another tip of a high decibel iceberg that has been crashing its way through the placid waters of modern pop for a couple of years since Sleaford Mods, Slaves and then Fat White Family broke out with a new kind of wonk truth about the UK on the verge of a nervous breakdown.

It’s always great to see the plucky, artful outsider break through to the mainstream and when its bands that are as snarky, sensitive and as exciting as these then it is time to celebrate.

Sleaford Mods idiosyncratic scowling laptop clatter was already remarkable enough and was pissing off the right people. The ‘proper music’ old men took to Facebook railing against the lack of guitars and the fact that all one of the duo had to do was press a button to make 1000 people dance. This should have been celebrated! Making music is no more valid from hitting a lump of wood with bits of metal stretched across it than a laptop. It’s the noise it makes that counts and Sleaford Mods acidic, social commentary of the UK and no compromise delivery was a neat and angry parallel to Grime’s urban malaise and the noisier end of the surviving post-punk awkwards.

In normal life, they would have been dumped in the hinterland just beyond the Fall’s decade’s long maverick howl but in the new broken Britain when we need music to make sense of the malaise more than ever they were suddenly corralled as unlikely figureheads and voices of about three generations at once.

The Mods classic UK snark and acidic wit and down at home gimlet eye for the rotten stinking detail of Brexit Britain made them perfect commentators for the crumbling rump of the empire and they had the tunes to back it up and a totally original sound. Still it was a shock to see them embraced in such a big-time way and what, had been for years, a backroom pub project was suddenly making sense in the large halls.

Sleaford Mods breakout would normally have been an isolated incident – a rare moment when one of the lunatics escaped the asylum but in the same moment Slaves also stormed the citadel. The London satellite town two piece brought a pop nous to their post-hardcore rush with tunes bouncing around the muscular aural skree of stand up drums and guitar filth.

They had grown up with punk – cider teenagers who loved Rancid and that Cali punk wave of the back end of the last century but when it came to their turn to create music they sounded so damn British with a music and reference points of pound shop Britain lyrics propelled by another but different two-piece format that was driven by those pounding drums and the clever and noisy guitar lines building a bass for the vocal attack that was poetry in motion.

Slaves had arrived with another key band of the moment, Fat White Family, who emerged from the twilight zone of all night bedsit Brixton and south London where the broken bulbs flicker over nefarious activity. They took their all-night party culture and eclectic post guilty pleasures music taste into a series of sleaze anthems that took a gonzoid groove and bus shelter poetry and turned it into a highly original combustible rock music. Somehow they rewrote the rule book and arrived as chemical Samuel Pepys documenting another generation of London life in the early 21st century.

Fat White Family’s influence has been enormous. Every ragtag gang of eccentric lunatics across the UK had a go at trying to match their chemical juice and most failed. The party part of the equation is the easy bit – actually coming up with the soundtrack takes a bit more skill as they all found out.

Only Manchester’s Cabbage came up with any kind of answers as they found their own idiosyncratic route out of the mess. Of course the Northern city has a long history of maverick and wilful outsiders and as the great and awkward Mark Smith finally started to ail Cabbage were his young understudies. They even played with the Fall at a great gig at the Ritz a few years ago.

Firmly owners of their own destiny, though, Cabbage had been writing wonk pop anthems of their own since then and established a die-hard and growing audience that sees them sit somewhere between cult heroes and grown-up chart action.

The most recent arrivals are Fontaines DC who LTW discovered in Dublin in 2015 and nearly released their debut single and wrote up here. The bands have moved on since then and their mighty debut album stormed the top ten with a thrilling command of noise and melody – like a 21st century Wire underpinning a great post Fall dislocated vocal delivery that intones great poetic missives with gimlet eye detail for life in a strong Dublin brogue. Already one of the albums of the year, Fontaines DC are on the fast track for being the key breakthrough band of the moment and represent a burgeoning scene in the largest English speaking country left in Europe. Bands like The Murder Capital from the emerald isle are also making an unholy and brilliant dark racket that we have been celebrating as well as the more gothic-tinged post 4AD beauty of Just Mustard.

If that all seems a bit ‘bloke’ heavy then let’s not forget there is a whole raft of women-led bands sharing the stages and bills. Again this is no scene – so no rules.

Manchester’s brilliant LIINES took their angular and brilliant post-punk out on tour with Sleaford Mods to amazing reaction every night where they were treated with the same kind of intense devotion as the headliners whilst upcoming Glove are getting released by Louder Than War’s own label and are bringing their brilliant collision of Patti Smith and the Slits with the same kind of creative urgency of the aforementioned bands to the venues in the NW that sees them packing out these places and on the tip of everyone’s tongues as the next big breakthrough.

Near relatives include The Lovely Eggs – whose idiosyncratic punk psych rushes of kitchen sink dramas have seen them DIY their way to the mainstream fringe whilst new arrivals like Black Midi are yet more distant cousins with their live groove and studied big hat theatricality being one removed from the grout celebration of these bands but a welcome addition with their clipped danceability and wonk quirk genius that sounds like a more urgent band more ~British version of a Primus. Pigs x 7 make an unholy racket that would have been doomed to a cult back room of pub status at one weary time but are suddenly embraced by a hungry new audience and Strange Bones are creating a highly original quirk of their own that would slot in very well in this brave new world.

I guess it’s a question of who can we corral in here – all spurious scenes are held together by the fragile bonds of the audience and ultimately the audience decides whilst we celebrate such diversity and noise.