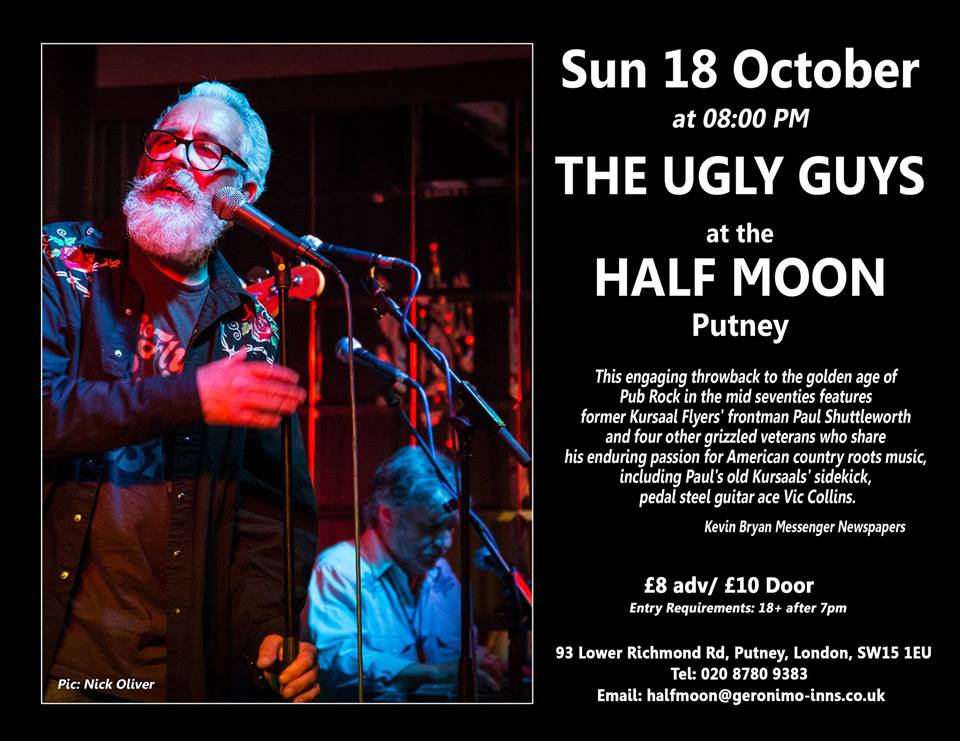 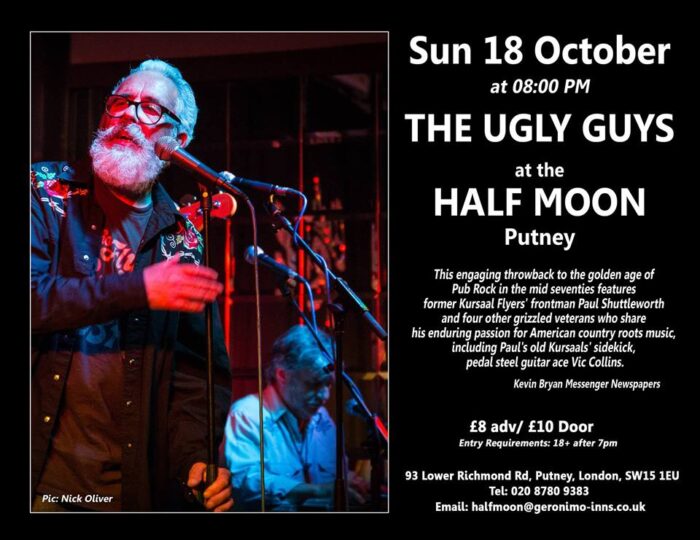 The Ugly Guys are a Southend-on-Sea based quintet built around two former Kursaal Flyers members : singer Paul Shuttleworth and pedal steel guitarist Vic Collins, joined by Steve Oliver on lead guitar, Andy Farell on bass and Bob Clouter on drums. They have been treading the boards since 2003 and have put out 2 excellent albums on Angel Air Records entitled “Lost In The Badlands” and “Still Twenty-Five in your Head” that was released in April 2015. This was their first appearance at The Half Moon and the turnout was good enough for them to become regulars at the famed South London music venue. The Kursaal Flyers are mostly known for their Phil Spector-ish pastiche “Little Does She Know” but deep down the band was a country rock outfit (Cow Pie an early version of The Kursaals was heavily influenced by American country rock acts like The Flying Burrito Brothers and The Byrds circa Sweetheart of the Rodeo).

The Ugly Guys wear their influences on their sleeves (or rather on their T Shirts as Paul Shuttleworth was sporting a splendid vintage Flying Burrito Brothers one), the setlist mixed originals and numerous covers. The Desert Rose Band’s version of “She Don’t Love Nobody”, a song originally written by John Hiatt was driven along by Vic Collins’s excellent pedal steel playing. “The Hard Way” had a pleasant Travelling Wilburys feel and “Heart River Falls” with its steady beat (excellent bass work on that number) and neat guitar runs courtesy of Steve Oliver engraves itself in the memory. Paul Shuttleworth ad-libed a few lyrics of Jimmy Webb’s “Galveston” at the end of their own “Neon Sky”. The Kursaal Flyers opened for The Flying Burrito Brothers on one of their European tours in the mi-seventies and played “Wheels” during one of their sound checks surprising their American idols in the process. “Wheels” was followed by another FBB cover with “Christine’s Tune” and “Hickory Wind” from the Byrds’s Sweetheart Of The Rodeo LP. The originals blended in seamlessly with the covers. “Lost In The Badlands” would make an excellent theme song for a Western Movie. The mandolin lead “A Man’s Gotta Do” proved an infectious toe-tapper and was preceded  by a superb version of Little Feat’s “Willin”. Paying homage to another Southend music hero, the band played a cover of Mickey Jupp’s “Cross Country”. Another mainstay of the FBB’s repertoire “Six Days on the Road” was the last song of the night.