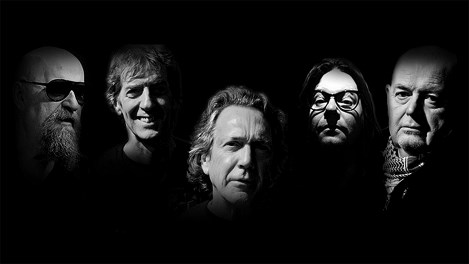 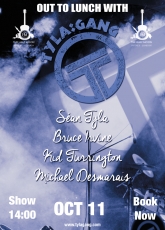 Pub Rock legend Sean Tyla steps down from loud Rock’n’Roll in style at The Half Moon. Louder Than War’s Craig Chaligne reviews.

Born after the demise of Sean Tyla’s excellent Pub Rock outfit Ducks Deluxe in 1975, The Tyla Gang were an altogether more hard rocking affair than the Ducks. Going through numerous line-up changes throughout 1975 and 1976, the band finally found some stability in 1977 with Bruce Irvine on guitar, Michael Desmarais on drums and Brian “Kid” Turrington on bass guitar. They released their magnum opus “Yachtless” in 1978 but due to their label Beserkley going bust and further line-up changes, Tyla decided to pull the plug in 1979 to launch his solo career which saw him enter the charts in the US and Germany with the single “Breakfast in Marin”. After quitting the music business in the mid eighties, Tyla took up farming (something that runs through his family), became a cricket coach and even started doing web-designing. In 2007 he made his return to the music world with his album “Back In The Saddle” and reformed both Ducks Duluxe and The Tyla Gang, touring steadily over the next 6 years. Unfortunately like a lot of musicians from the seventies, Tyla’s hearing started deteriorating seriously in 2014 with an almost complete loss in his left hear. He’s planning on sticking to electro acoustic music with his new project Heartlander which will be coming out in 2016. Nevertheless he ploughed his courage (and his ear plugs) for one last gig with The Gang in Putney. The Duck Deluxe afternoon Christmas shows at The Half Moon were usually very popular affairs but the turnout for The Tyla Gang for what is supposed to be their last UK gig was a bit of a let-down. Such a legendary band for 12 pounds in one of London’s best music venues was a bargain.

You could feel the guys were a bit deflated at the start but though small, the audience was enthusiastic and the band got better and better as the gig went along. The show was to be centred around “Yachtless” with the line up from that album featured. However bass player “Kid” Turrington had to cancel at the last minute due to illness and John McCoy who had played with the band from 2013 to last year had to step in at the last minute driving all the way down from Norfolk on the day of the event. The gig started with “Dust On The Needle”, the second track off Yachtless. The first part of the gig pretty much stuck to the track listing of that album. For a man who has lost most of his hearing in this left ear, Tyla did a splendid job of staying in tune. Sporting a superb Orange telecaster, he joked that his new amp was now smaller than his radio at home. Guitarist Bruce Irvine drove the songs forward whether riffing on his Les Paul or doing some nice slide guitar parts with his Stratocaster (to excellent effect on “Don’t Turn Your Radio On”).

After a short break, Sean came back and started solo on an excellent rendition of the Little Feat classic “Willin” on which he was joined mid-song by Bruce and Michael. Bass player John had wandered off and missed the start of the second set. After a Tom Waits cover where Bruce and Michael managed to follow their band leader (despite not knowing the song), John finally returned from his stroll. The second half was packed with some of the bands most famous tunes. “It’s Gonna Rain” and “Suicide Jockey” from  the Moonproof album were followed by “Moonlight Ambulance”, a staple of the band’s live act since the seventies but that only got released for the first time on the Rewired compilation in 2010. The brilliant “Styrofoam” originally released as single on Stiff Records got an outing. “Hurricane” was saved for the encore and the show closed on a spirited version of “Fireball”, originally recorded by Ducks Deluxe.