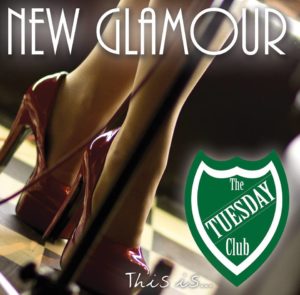 Hailing from St Albans, The Tuesday Club boast eight members playing eight different instruments from twang bass to cowbells, but to be honest it’s hard to see why they need so many. New Glamour is a slab of not-to-be-taken-seriously punk/pop and to be honest very little else.

With an often frenetic ska backing and lyrics in the style of Ian Drury, it rattles through from start to finish with name checks to Conway Twitty and Walter Mitty and a sense of wild abandon. To be honest, there’s very little else. The chorus is annoyingly repetitive and at four and a half minutes long, it’s probably twice a much as you can stomach.

It’s a shame, because the Dury likened words are clever and amusing, as was the great man himself, but the song lacks any cohesion and gets slightly silly towards the end.

Similarly, the b-side Old Before You Time is a poor mans, poor version of The Cramps. Maybe only Lux Interior can pull-off the OTT, silly but brilliant, vocalisation. Andreas Vanderbraindrain tries far too hard and only succeeds in sounding like second rate Vic Reeves pub singer impression.

Again, it’s a shame as The Tuesday Club seem to have a bit of a media following that seems to be increasing as time goes by. Unfortunately, despite New Glamour having the makings of a good song, it’s spoiled by silliness that isn’t even remotely funny and only bordering on enjoyable.

All words by Paul Scott-Bates. Article originally on hiapop Blog here. More of Paul’s writing on Louder Than War can be found here. Paul’s website is hiapop Blog. Paul is working hard to save Radio Lancashire’s On The Wire, the BBCs longest running alternative music programme. Follow him on twitter as @saveonthewire for all On The Wire news or follow hiapop Blog on Twitter, @hiapop.