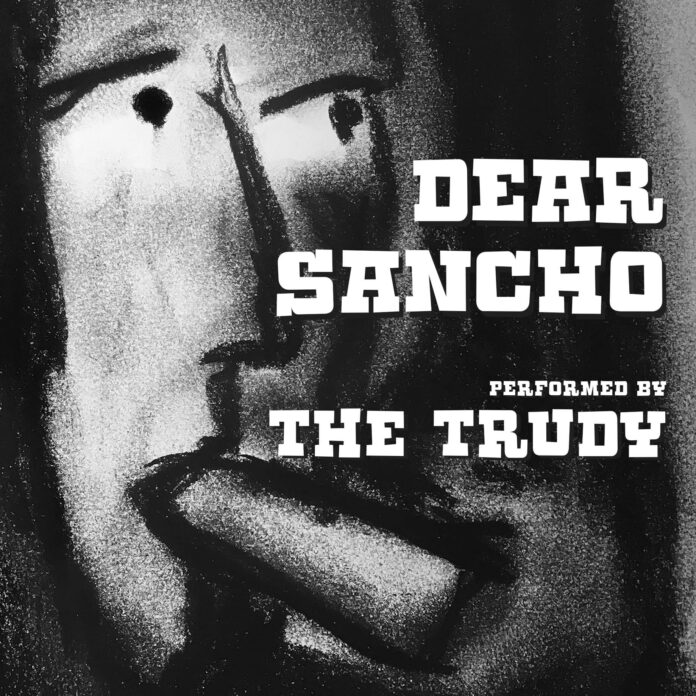 The Trudy are the coolest UK cult pop band you’ve probably never heard of.  They should have been our Blondie, a smart, art-pop hit-machine. Connections with the Cardiacs meant they had a bohemian oddness and were just too cool for playing the mainstream game. The resurrected line-up have released a dreamy classic says Ged Babey, as he looks back at their lost history.

Take five minutes ten seconds out of you day today: Sit back, close your eyes and listen to this… gorgeous, grown-up, day-dreamy pop-adelia.

(2021)  ‘Dear Sancho’ is a soaring, literary-inspired reprise that asks: how can we reach out to dreams, when we’re consumed by delusion?  It follows the curious relationship between Cervantes’ mad knight-errant Don Quixote and his everyman squire, Sancho Panza.

It’s a beauty isn’t it? Transcendental. Like a slowly rotating musical box which has been amped-up… a fairground ride in your mind.  Anyway…. Who are this mysterious band, I hear you ask… that I seem to love, Trudy, madly, deeply…

(2006 -2016)    The Trudy reformed in 2006 after ten years apart and released a superb album called Always Never Beautiful Forever which you can still get hold of from here. It is sheer pop classicism, impossible to categorize because it’s not new wave, psych or indie, Britpop or any one thing, it’s just class. Not just Dirt Cheap Melody…

That is a great video. It captures the bands self-contained world of vintage toys, phones and vinyl and a fantasy lifestyle akin to living in a shared-student-house forever or in a pad like proper pop-stars the Monkees did.

(1979 – 1996) I saw The Trudy play, in their original incarnation a couple of times at the Joiners in Southampton in the late 80’s and early 90’s and Mrs B and I loved them so much we trekked up to that there London to see them play an unforgettable set at a pub which i can’t recall the name of. (Rails at Euston – a Zombie Club night)

In their early years The Trudy had an obsession with Space and TV Sci-fi. They claimed to be aliens from the Planet Miron. All of their songs were about Living On the Moon, interplanetary adventures and relationships. They had an upbeat sound that was Sixties Garage, Girl-Group Pop with a punky edge. There were inevitable but inaccurate comparisons drawn with the B-52’s – but there was more a Rezillos meet Blondie feel to my mind.

Formed by former Cardiacs member Peter Tagg, The Trudy released a number of successful indie singles and an album ‘Tune-In To The Trudy Love-Ray!’ Becoming well known for their energetic live performances, they attracted rave reviews and regular radio airplay.

The Love-Ray album is, in my opinion, one of the most perfect, uplifting and joyful albums in the history of Pop.  Up there with Blondie, Buzzcocks and the Kinks  (my personal canonical greats as I don’t subscribe to Beatles, Beach Boys and Kate Bush Q mag received wisdom).  A CD copy sent to us by the band to replace my cassette copy has been the go-to disc to cure lockdown blues. (The Adventures! The Suspense​!​ album on bandcamp contains versions of some of the songs..and more.)

From Venus With Love for some strange reason has always been mine and my wife’s favourite Trudy song.  It’s as if To Sir With Love has been relocated to the cosmos of Star Trek and set in the far-future of 2002, ‘when I met you’.  It’s arguably the grooviest interplanetary love song since ‘Another Girl, Another Planet’.

A bizarre connection came to light recently when the Portsmouth compilation South Specific 2020 was released as it included a song called Lost In Space by the The Frames. An early version of a song from Tune In To The Trudy Love-Ray LP.

It transpires that Nick, Frames guitarist/songwriter moved to London, joined the Trudy in 1984 and took the song with him! They carried on playing it after he left, recording it for the album in ’91.   So maybe it was he who set their co-ordinates, Warp Factor 8 for deep space?

Somehow The Trudy never got that lucky break or hit-single which would’ve made them the stars they deserved to be.  Then as now, they remain a priceless cult band, loved by the few but undiscovered by the many.

They will always be the brightest of stars in my eyes: the band who never failed to put a smile on my face with their musical vivacity.

All words  Ged Babey with press release content in italics