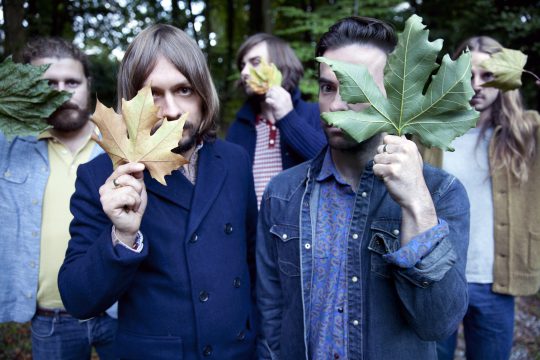 Mancunian purveyors of folk-pop, The Travelling band, get metaphysical on this, the latest single from their forthcoming third album, The Big Defreeze. Louder Than War’s Dave Beech reviews.

Much like their name, the new single from Manchester’s The Travelling Band is imbued with a sense of wanderlust that relishes in the wide, open spaces perpetuated by their latest offering, ‘Passing Ships’. Indebted to the rich history of folk, with glossy slabs of americana thrown in for good measure, the track builds towards multiple crescendos; rising on a wave of mounting keys and understated cello, dropping in to a false finish that once again rises to an emphatic close.

Crafted around the concept that two separate people could theoretically occupy the same dream-space from different perspectives, the idea behind ‘Passing Ships’ might well appear surprisingly psychedelic, given the folk-pop veneer within which it’s encased, and one would be forgiven for thinking that. On a less metaphysical, somewhat more romantic level however, the song is about happenstance, unrequited love and the fear of missed connections. This tangible level of humanity within the narrative is the perfect accompaniment to the rolling upbeat folk on which it’s effortlessly layered. A lazy comparison would be Mumford and Sons, but there is far more going within the composition and song-writing of The Travelling Band than anything Marcus Mumford and co have ever released.

Despite it being three years since the band’s LP, the time spent away has only seen their confidence grow and their sound become more realised. If ‘Passing Ships’ is anything to go by, then their forthcoming third album is going to be nothing short of majestic.

Dave Beech is an aspiring music journalist based out of Manchester. He writes and edits for a number of different websites and links to his work can be found over at his blog, as well as his Louder Than War Author Archive. He also tweets as @Dave__beech.