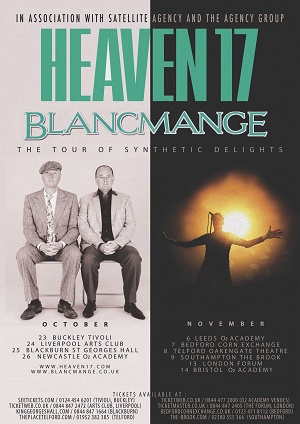 The evening didn’t start well. After noting on the Heaven 17 website that doors opened at 7:30pm, my mate arranged to pick me up from home at 7 to make the 20 minute journey to Blackburn. He arrived 20 minutes late, but given that the doors would only have been open ten minutes when we got there, there was no issue.

After taking an extra 5 minutes to navigate the visitor unfriendly one-way system, we arrived at King Georges Hall to find that the doors had actually opened at 7pm and Blancmange had been on stage since 7:30. Such is life.

It was a sort of homecoming for Neil Arthur of Blancmange (he comes from neighbouring Darwen) and buoyed by the fact that his beloved Blackburn Rovers had secured a second win on the trot away at Nottingham Forest, he was on his usual comical but entertaining form. In November of last year, Blancmange played at Darwen Library Theatre in front of 180 people (review here), tonight as part of the Tour Of Synthetic Delights with Heaven 17 it was a capacity 750 crowd.

Still without the long suffering Stephen Luscombe, Arthur is the consummate professional often cracking jokes with the audience his voice is startlingly still as characteristic as it was thirty-something years ago. With the bulk of the show coming from the first two (and most commercially popular) albums in Happy Families and Mange Tout it was nothing but pleasure after pleasure for the hordes of bouncing bodies in front of him.

The obvious hits were there and the Happy Families material had the slight twists and turns that were incorporated into the recent Happy Families Too remake, and Living On The Ceiling prompted a bizarre audience sing-along of the instrumental hook line much to the delight of Neil.

There was a downside to the sound though. It was bass heavy and the characteristic bass sounds of Blancmange didn’t help as there was bass feedback which detracted from the often clinical sound of the group. The sound desk really needed to sort it out much earlier than the last three tracks of the Heaven 17 set.

Closing with Waves, Living On The Ceiling, Feel Me (containing lyrics from Grace Jones’ Pull Up To The Bumper and M’s Pop Musik) and the amazing Blind Vision you can’t help thinking that Blancmange are on somewhat of a roll. Not only are they pleasing the folks that were around the first time, but there were many attendees barely in the 20s hopping and singing along to the classics.

It’s almost four years since they returned to the live circuit with new material in Blanc Burn and on tonight’s showing they’ll be around for quite some time yet.

Seeing Heaven 17 live was a first for me. Now down to just two members in Martyn Ware and Glenn Gregory, the hybrid Sheffield sound of The Human League meets Cabaret Voltaire was instantly recognisable in the 80s.

They too pulled most of their set from their first two albums Penthouse And Pavement and The Luxury Gap, but it was with Circus Of Death (the b-side of The Human League’s Being Boiled written when Ware was part of the group) that their set began. An interesting choice perhaps but a crowd-pleaser nonetheless.

Two new tracks, Illumination and Pray also featured in the set. Gregory explained that they had hoped to sell the cd containing them on tour but had been let down on supply and would now sell via their website because “no fucker else will sell it. I’m pissed off with the music industry”.

For me Gregory always had a superb voice. His deep tones were instantly recognisable and they really haven’t changed that much. Through Crushed By The Wheels Of Industry and Geisha Boys And Temple Girls it was superb and he, like Arthur was a crowd pleaser. Ware, tucked behind his synth in a suit and tie also displayed a great sense of humour and often commented about the stifling heat of the venue – “it’s getting cold in here, it’s dropped 2 degrees below boiling point now” as he wiped sweat from his brow.

I often felt, and still do to this day that Heaven 17 missed a trick with Let Me Go. After the enormous success of Temptation (kept off the top spot by the likes of Bowie, Duran Duran and Spandau Ballet) they should really have given it a re-release. It’s one of their finest and one which was greeted with a huge cheer when it was announced. Temptation was, obviously a high-point too, undoubtedly a classic pop song if ever there was one.

With a version of You’ve Lost That Lovin’ Feeling (it appeared on the Human League’s Reproduction album) Gregory almost missed his cue to sing as he bolted down the side stairs and across the stage.

Ending over eighty minutes of music with the aptly included Being Boiled, Heaven 17 departed to rapturous applause. Like Blancmange, Ware and Gregory are a superbly entertaining live act.

The paring of these two groups as a live package is sheer genius and anyone with an inkling of pop affection should make sure they attend sharpish.