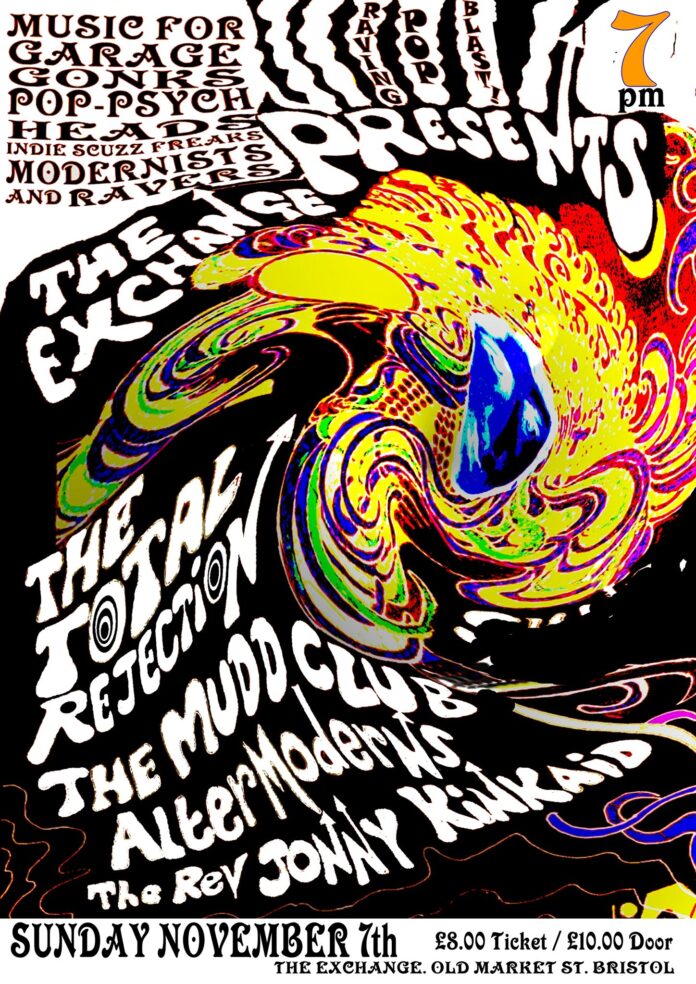 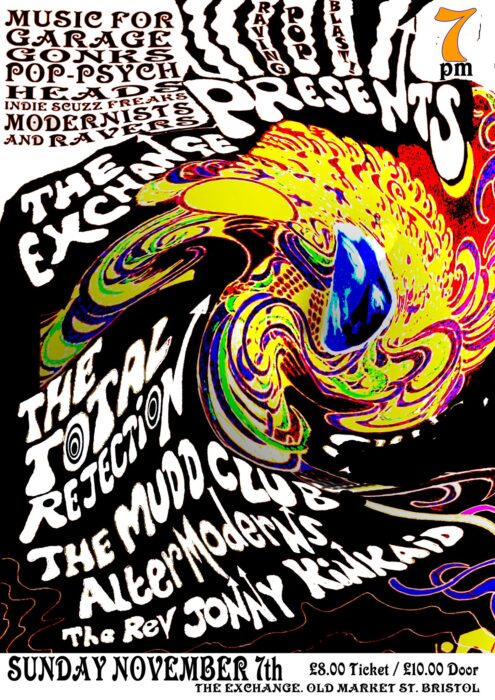 The Total Rejection – Bristol Garage-Punk Pop-Psych superheroes have spared literally no expense to bring you an audio and visual treat – a homemade video for their new single.

It is also to bring your attention to the Raving Pop Blast multi-band gig at the Exchange in Bristol this Sunday 7th November 2021 featuring Jonny Kinkaid. AlterModerns, The Mudd Club and topping the bill, The Total Rejection.  It’ll be the event of the Autumn in West Country Garage circles!

I will hand over to Arthur from the Total Rejection and the driving force behind Raving Pop Blast to tell you about the song… be warned though, he is a kooky fellow (who to my mind is as inspirational an underground hero as Billy Childish and Dan Treacy)

The forthcoming LP is slightly ‘darker’ sounding than our previous albums, bringing the ‘Pop-Psych’ influence to the fore maybe… Although there are still a few ‘Garage Punk’ blasters included and ‘Paul’s Eye’ is one of them. And by ‘darker’ we do not mean ‘depressing’ or ‘tortured artist bollocks’ – Maybe ‘creepier’ is a better word for it. Yeah, it’s a creepier LP.

We just wanted to put something out that was a few minutes of sheer joy. Out and out Garage Punk! No frills. Great tune. Biff Bang Pow! Wallop!! There it is…take it or go listen to some over hyped tune-shy drivel instead thinking you’re somehow hip. ‘Cause trust me…Hip you is not!

The video we did for a laugh. We all needed a laugh. It’s a bit daft, but that’s okay, in a time when the country is on it’s knees, when bands have all forgotten how to write tunes. When we have a vile racist government and ‘Brexit’ is now starting to kick in and we have no food or petrol. When Gammons are turning from pink to red because two men actually danced together on national TV, we’re happy to be the ones to supply a laugh.

We didn’t have any money to make a proper video, so we filmed this on our phones. It came out surprisingly well. Filmed on location in Bristol and Stoke On Trent.

The song itself, isn’t quite as daft as the video may imply.

Based on growing up in a small village in Devon, where I tended to stand out, and would regularly get a beating for being ‘different’ – small, skinny, shy , but very outspoken, I can remember even at the age of eight arguing with a friends very racist parents, about how stupid and wrong they were to treat people differently simply because of skin colour.…I could never keep my mouth shut for an easy life. (some things never change!)

Despite being a soft weakling of a kid, I never backed down. ‘I got my head kicked in over Shang-A-Lang’…it’s true. A gang of kids asking me what music I liked because they’d seen me with Barracudas written on my duffle bag or something…and they were all into Led Zeppelin, and my reply was “I’d rather listen to Bay City Rollers -‘Shang-A-Lang’ than Led Zeppelin” – It wouldn’t have mattered if I’d said The Clash, Buzzcocks…or Mozart, I was going to get beaten up so I might as well wind the bastards up. And yes, I was beaten up and thrown down a flight of concrete steps!

There’s still a dent in my head from it.

Ask me about Led Zeppelin today and I will still say the same thing, But try throwing me down the steps, and you’ll be sucking your hospital food through a straw! Ha Ha!

I never felt like I fitted in anywhere. Cool kids over there, me over here. I feel the same even now. The whole ‘Big Fishes/Little Pond’ thing…I just let everyone get on with their own little scenes, thinking they are somehow superior, and I find my own way …I am a firm believer that at some point, time will tell who was right all along. I’ll probably be long gone, but it’ll happen.

There’s also an air of paranoia in the song… which when you have spent so much of your life having to look over your shoulder, is hardly surprising.

The title refers to having a slightly wonky eye, and slightly sticky out teeth…which tend to fit me better now than when I was a kid. A friend of mine told me I had ‘Paul’s eye’, and another told me I had ‘John’s teeth’…Things like that stick in me head, and then find their way out into songs later…

Don’t forget to mention the gig on Sunday 7 November, the Exchange…. (Will do)

The EP has two exclusive B-Sides ‘Too Little Too Late’ and ‘Burning Me Up’. ‘Paul’s Eye John’s Teeth’ is taken from the forthcoming LP ‘Off The Top Of Our Heads …And Other Forbidden Pleasures’ (Expected Feb 2022)