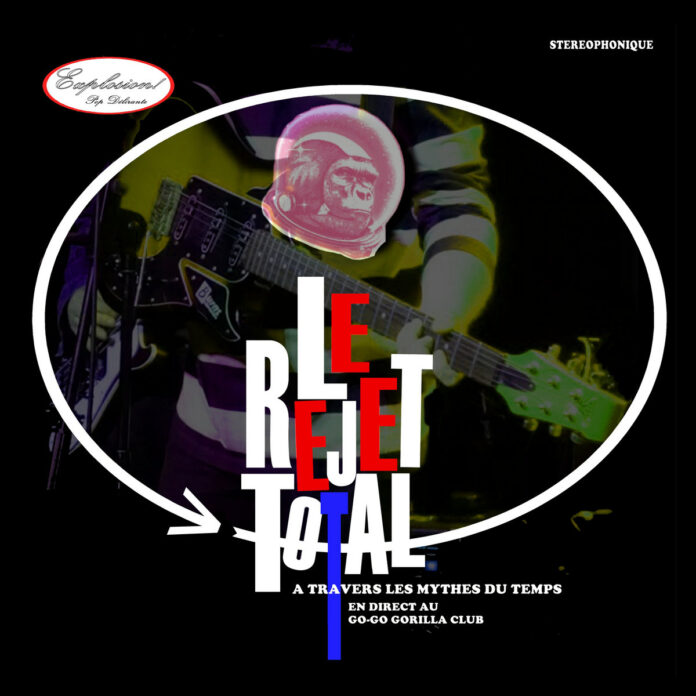 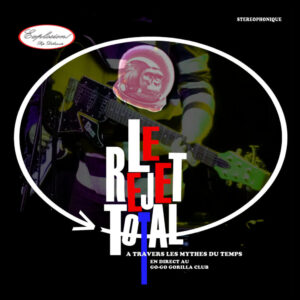 ‘Live in France’, Bristol psych-punks play a blinder, record it, release it and translate the sleeve notes entirely into French for a laugh.  Ged Babey doesn’t need to try and remember his schoolboy French with Google-Translate as he goes ‘Through The Myths Of Time’.

I do love a good Live Album though it must be said. Probably a punk rock thing.

From It’s Alive to the Roxy WC1, Precise Modern Lovers Order to Kick Out the Jams there are numerous invaluable live recordings where they arguably better studio output by the artistes. I’m not an expert on 60’s Psych era live-stuff to be frank but the same must apply.

The Total Rejection and Raving Pop Blast, who are in fact one and the same tell us confidently that…

THIS IS ACE! DIG IT! PLAY LOUD!!!!!! These are LIVE recordings (from over three days) by Bristol (UK) based Garage-Punk-Pop-Psych band THE TOTAL REJECTION. Recorded live with no overdubs (just a quick levels/balancing). The recording is raw and messy. But also wild and rocking! What you hear is what happened.

Indeed. It is ace! It’s low fidelity, but high on energy and great tunes. No superfluous banter, just the songs and an unmistakable enthusiasm for the work from the band.

There is no indication that this is a band of older gents, the microphones fail to pick up the creaking of their old bones… and you can imagine stylish French mods groovin’ and twistin’ on the dancefloor.

Seven songs from Everybody Knows What You Don’t Know album, three from Wrapping Yourself In Silver Foil Won’t Save You From The Blast and just one from  The Time Traveller’s 3rd Will And Testament... almost a ‘greatest hits live’ LP… the Total Rejection are a band in their late-blooming prime.

But hang on a minute… that audience applause sounds a bit odd… no clinking of glasses, no whistles or chatter, just modest applause…no ‘thank you and goodnights’.

I do hope this isn’t one of those bogus live recordings like “Live” by The 13th Floor Elevators. (I googled it).

In an attempt to cash in on the band before it totally disintegrated, International Artists gathered together a combination of released and unreleased studio tracks, overdubbed them (rather unconvincingly) with applause, and released it as a so-called “live” album (all without the band’s approval).

I asked Arthur from the band… A three night residency at a French club called Go-Go Gorilla eh?  (If you’d used the new-fangled internet properly, there is a club night of that name in Germany.)

What are you suggesting? That we would lie? Ha ha ha… OK it is genuinely live with no overdubs, but yes, we did mess around with the audience sounds… The whole thing started as a joke we were talking about myths in pop music (like Rod Stewart playing harmonica on My Boy Lollipop, and Bob Holness playing Sax on Baker St)…so we thought it would be a fun idea. The title is the clue ‘Through the Myths of time’ – But everyone thinks it says Through the Mists of time. And of course the Orgasm LP by John’s Children had screaming dubbed on…it just seemed like the right thing to do!

We would have gotten away with it too, if it wasn’t for that meddling Ged Babey! ha ha ha!

Going to the trouble of getting the drummer to count-in, Un deux trois, quatre was a neat part of the (Total) Deception.

The thing is – it doesn’t detract for a single second from the music on offer.  It’s still a thoroughly enjoyable raw psych album. Even if you feel slightly tricked, it’s completely in keeping with the whole ethos of the band.  Replicating the Then sound Now.

In fact, ironically, blasting it out for the umpteenth time as I write, despite being a lie, it may well end up being regarded as the most honest representation of the most-groovy band you’ve never seen live.*

*(unless you have seen them live!)