Home Blogs The top 10 most political songs – a list compiled by Violation... 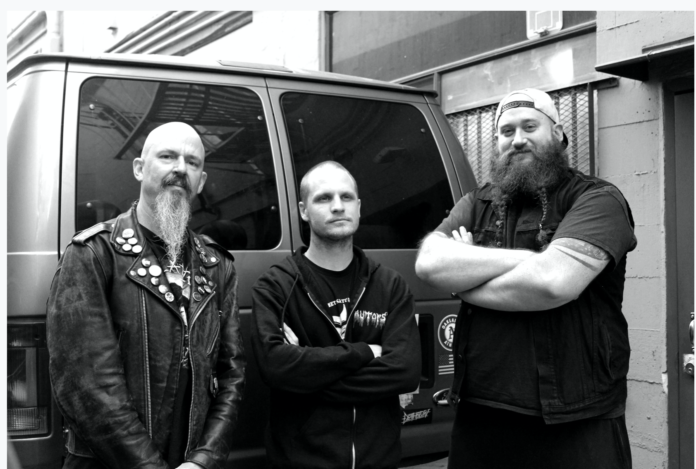 Continuing on from 2018’s With Man in Charge, the returning line-up of Autopsy (& former Abscess) mastermind Chris Reifert on guitars and vocals, alongside Bassist Joe Orterry & drummer Matt O’Connell, indulged in a new ferocious attack of violent and head-pounding punk, rupturing the eardrums with Reifert’s trademark rabid delivery during latest album Dying to Live, Living to Die, which was released by Peaceville in November 2019.
Violation Wound presented 18 tracks – a sneering, unrelenting aural assault on the current world climate amid its demise, and the continuing deterioration of minds & societies. “It’s the equivalent of feeling a brick to the back of the head repeatedly until you pass out or learn to like it”, chuckles Chris Reifert.
Order the album now – https://violationwound.lnk.to/DyingLiving
Cock Sparrer – “Out on an Island”
What a great band. They have the knack for blending melody, aggression and real life, in the trenches so to speak subject matter. They took a step away from aggression here and I really like the vibe on this one. Fuck y’all, you can have your pointless wars to yourselves.
Frank Marino  – “Young Man”
When I was asked to participate in this article and had to think of political songs my brain mostly went to anti-war themes, which are ultimately tied to politics in the end. It would have been too easy to throw down ten Discharge songs and be done with it, but listen to what Frank is saying and good luck not getting your face melted off by his guitar.
Saint Vitus  – “War is our Destiny”
It’s astonishing how many songs I love from decades ago still ring relevant today. I guess humans will always be fucked up and will struggle to get along. And of course it’s always the ones with the least money and status that end up doing the ugly work for the ones that start the messes and rake in cash as a reward for being truly horrible people. I hope someday this theme will be obsolete and these songs will be interesting in a historical way, but I doubt it.
Dr. Know  – “Watch it Burn”
One of my favorite punk/HC bands of all time. Their Mystic Records stuff can’t be beat. There, I said it. The version I’m referring to is the one from the “Burn” 7′. I first heard this when I was 15 or 16 and it still kicks my ass. Punk perfection and text book awesomeness.
D.R.I.-  “Stupid, Stupid War”
These guys have a lot of songs that I had in mind as contenders, but I ended up with this one without too much of a problem. “Dealing With It’, in my opinion is one of the best HC albums ever made by anyone ever. I saw them live a couple of times when this album came out and it was a sight and sound to behold. This shit kicks ass and that’s that.
The Ghost of a Saber Tooth Tiger  – “Animals“
And now for something completely different. Sean Lennon has been killing it with his music for quite some time and I reckon for too many people it’s been under the radar. I love the sarcasm of this one. It’s a badass psychedelic middle finger to the powers that be and the suckers that bow down to them. Look more into this band if you want to have your brain squished and your eardrums rewarded.
Mojo Nixon and Skid Roper –  “Gonna Put my Face on a Nuclear Bomb”
For these last three cuts, let’s go out with a bang. And by that, I mean “forget about the bombs and light a fart”. I stumbled upon a Mojo Nixon record by accident in a record store (yes, those once existed, kiddies) many years ago and my friend Mika who I was there with told me Mojo is awesome and that I should pick that record up. Thanks, Mika!
The Mothers of Invention –  “Trouble Every Day”

This cut should be an obvious one but tragically I bet it’s not for lots of folks. Well, here’s your chance to get hip. For decades I’ve made no secret of my love for Frank’s music and this song is just another reason why. This came out in 1966 and still holds strong today. Things seem to be stuck in some rotation that can’t be stopped and this tune points the finger at what was going on then and is still going on. Humans are so dumb.

Frank Zappa – “Dumb All Over”

And speaking of dumb, this song is definitely not. It’s mostly taking a poke at religion, but in the end religion, politics, war, gullible people and destruction are all tied together in the same ball of insanity. Leave it to Frank to make sense of it all too easily while making you laugh, think, be entertained, get outraged and try to do better all at the same time. I can only imagine what he would be saying and playing today.