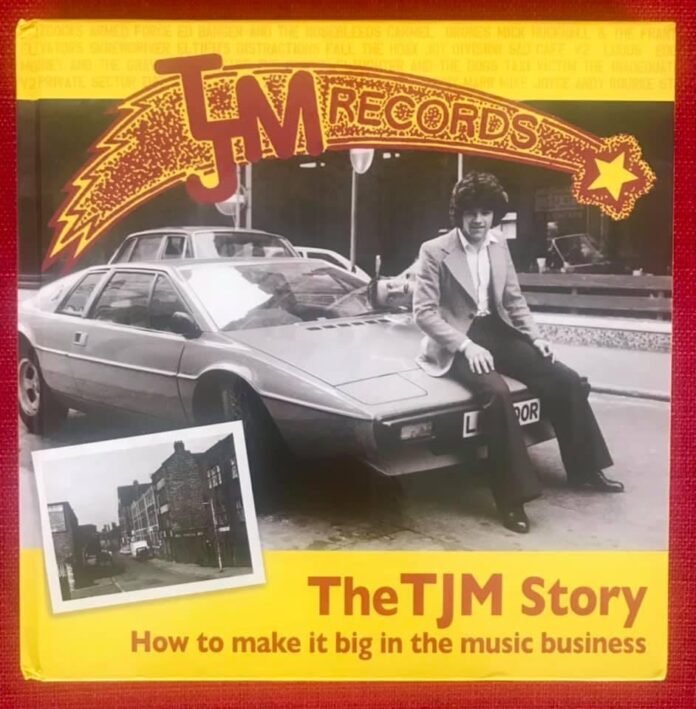 The TJM Story by Tony Davidson
Self Published 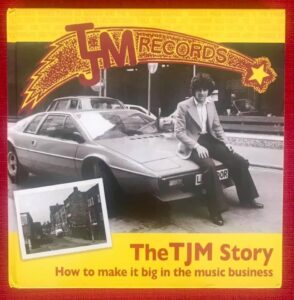 “And, to steal a phrase, suddenly there came a bang! You cannot return the bullet to the gun. In so many ways the initial fire, heart, naivete and possibility triggered by Tony Davidson, be it through the day to day unfolding scene at the rehearsal rooms or his label will always remain a point of ignition. The city would never be the same again”

I’ll be honest, I’ve been waiting for this book to come out for some time. It’s a story that has needed to be told. Tony Davidson is the link between those first Pistols gigs and what came later with Factory etc. His influence and importance to our culture have been academically recognised already. Professor Nick Crossley, in his book, ‘Networks of Sound, Style And Subversion’, analyses the Punk and Post Punk worlds of Manchester, London, Sheffield and Liverpool from 1975-1980. He puts Tony at the nexus for so much of what happened afterwards, yet he isn’t as well known to the public such as Tony Wilson.

In part, it’s an autobiography. This is Tony the man, whose career is as rock and roll as many of the bands. He tells his story with incredible humbleness and modesty. It’s a fascinating read. From rebellious boarding school days to his first experiences as a Soul Boy visiting the Twisted Wheel. Tales of how he was ‘in the right place at the right time’ on many occasions, and sometimes in the wrong place on a few, one of which led to a short stay at Her Majesty’s pleasure.

Whilst the initial creative spark of punk is down to Devoto and Shelley bringing the Sex Pistols to the Lesser Free Trade Hall on 4th July 1976; Tony had his eureka moment on their second visit to the city. Already managing The Drones and promoting gigs he stumbled across a property at 35 Little Peter Street; just off Medlock Street and behind Deansgate Railway Station. At a cost of under £22,000 (a few quid in 1977) this abandoned mill became T.J. Davidsons Rehearsals. Perhaps most famously known for where Joy Division recorded the video for Love Will Tear Us Apart. A place where legacies would be forged which exist today.

The TJM Story weighs in at 236 pages and is 9’ square. It could quite easily have been a ‘coffee table book’ in size but that would have been pretentious. Chris Connelly has done a fantastic job on the design. It is bursting with interviews and anecdotes. It’s visually stunning too, with rare photo’s, scans of posters and ticket stubs, and features several illustrations from the renowned local playwright, actor and artist Brian Gorman. This book covers many bases and once you pick it up, will find it difficult to put it down 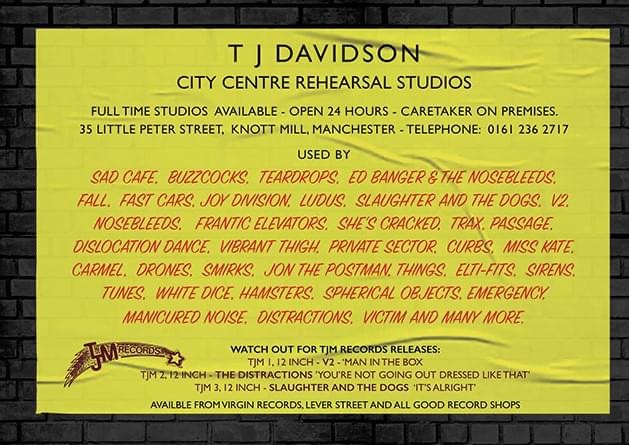 As well as being autobiographical, the book is full of exclusive interviews with Manchester legends who rehearsed at TJ Davidsons. Many of whom were making their first steps in the music world when encountering each other in the late ’70s. To give you a flavour, we’re talking Buzzcocks; The Fall; Sad Cafe; The Freshies; Fast Cars; Ludus; Salford Jets; Ed Banger and The Nosebleeds; The Frantic Elevators and of course Joy Division. That’s not even scraping the tip of the iceberg. As well as the recognisable bands from that era, many individuals rehearsing at the practice rooms were in their formative bands and would achieve success later on. Characters such as Mike Sweeney; Mick Hucknell; Morrissey; Johnny Marr; Billy Duffy; Marc Radcliffe.

The book also offers a welcome glimpse of the post-industrial times which helps put things into context. Tony features the personalities behind the scene or on the periphery who were equally as important in their own ways, such as original punk Denise Shaw, local Café owners Tony and Brenda and the building caretaker Michael O’Gorman. These reinforce the community feel to it all; something that is born out of the aforementioned interviews.

This is also the story of TJM Records, the record label itself. It covers the financial and business side of things as well as focussing on the stories of the releases between 1978 and 1979 from the likes of V2; The Distractions; and Victim amongst others as well as later reissues and compilations. There are several insightful and interesting entries here with extensive focus on Slaughter and the Dogs and The Frantic Elevators. The section on The Teardrops, featuring the maverick Karl Burns after leaving The Fall (for the first time) is enlightening too. It’s not all plain sailing though, with a section on the problematic, later right-leaning Skrewdriver. A very different band after they left TJM, Tony makes a solid case for the R’n’B and soul sound which is unlikely to ever appear on streaming platforms.

Alongside his own story, the bands and the releases Tony celebrates those creatives who were part of the label. Artist Alan Adler was responsible for many of the TJM sleeves, and following his time with Tony became an illustrator for many publications, including The Times, before becoming a successful actor. The fact Kevin Cummins is featured shouldn’t be a surprise. A number of the most famous pictures of Joy Division, Buzzcocks and The Fall etc were taken by the distinguished photographer at TJ Davidson’s.

There are also those whose paths crossed with Tony’s at the time of TJM but did not then or people he’s worked with in later projects. Photographer David Gleave first met Tony as part of The Naughty Boys, one of the great lost Manchester bands whilst practising in the rehearsal rooms however only formed a friendship many years later. Martin Ryan and Mick Middles produced one of Manchester’s first fanzines, Ghast Up, the former publishing a book covering those heady days, the latter becoming a well-respected music critic and writer at a local and national level. Others featured include International soul DJ Richard Searling; the aforementioned playwright, actor and artist Brian Gorman and Louder Than Wars’ very own John Robb who first made contact with Tony as a 15-year-old. 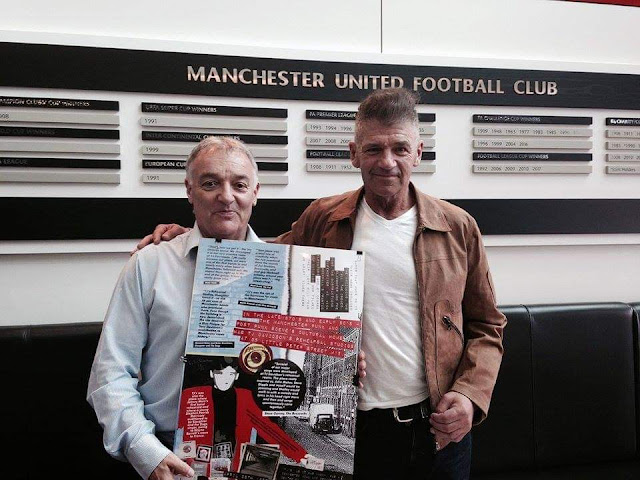 Most recently Tony has given unwavering support for former Manchester United legend Lou Macari’s Macari Foundation tackling homelessness in his adopted city of Stoke-On Trent. The story of Lou and the 1979 Manchester United FA Cup Final Squad visiting TJ Davidsons to rehearse what would become Onwards Sextons Soldiers should be a short comedy film in its own right. I won’t spoil it though, you’ll need to read the book!

The Tony Davidson story doesn’t end in the late ’70s. After the original TJM Label closed Tony began working with several 60’s legends such as Wayne Fontana; The Quarrymen; PJ Proby; The Searchers and many many more. Those adventures are touched on here but are being saved in full for a second volume of the book.

This book is essential for anyone with an interest in pop culture; music at the latter end of the 20th Century or the history of the Manchester music scene. It fits perfectly alongside Martin Ryan’s ‘Friends Of Mine’ and Gareth Ashton’s ‘Manchester, It Never Rains’ reinforcing and adding additional perspectives as well as eyewitness recollections to arguably one of the most exciting periods.

A launch event for the book is being held at Manchester’s Stoller Hall on 22nd Sept 2021 with speakers including Peter Hook; John Robb and Lou Macari amongst others. The book and tickets for the event are available from HERE with all profits going to the Macari Foundation

Tony will be Nigel’s guest on the Louder Than War Radio Show on the 15th September. 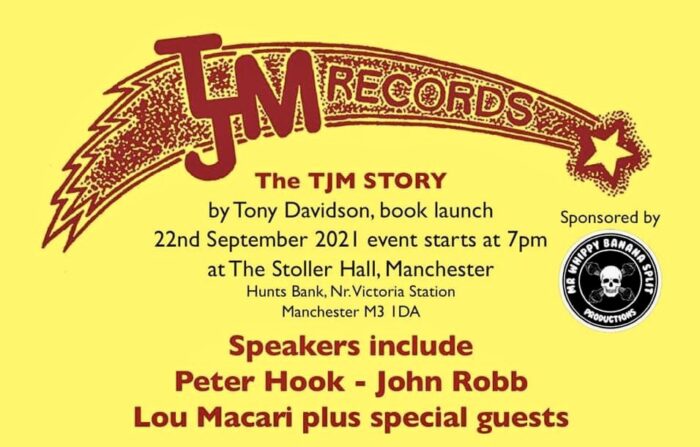 “All words by Iain Key. See his Author Profile here author’s archive or on Twitter as @iainkey.