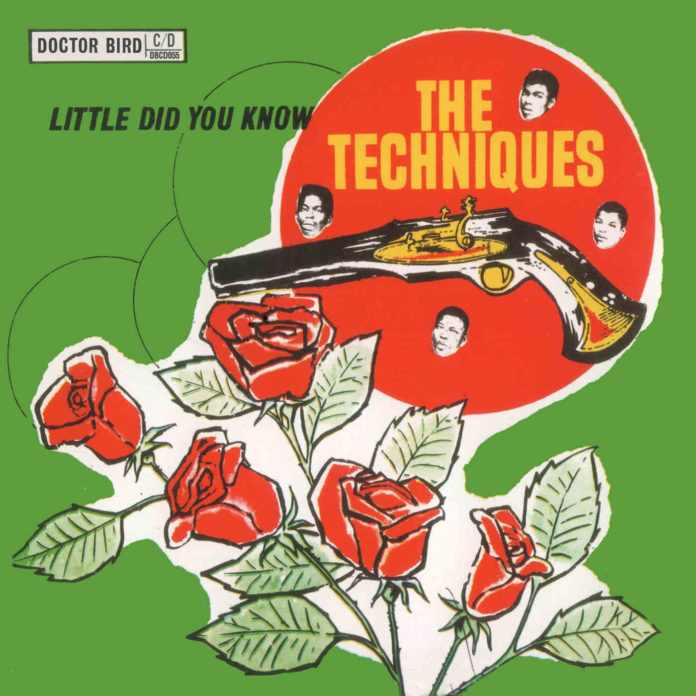 The Techniques – Little Did You Know 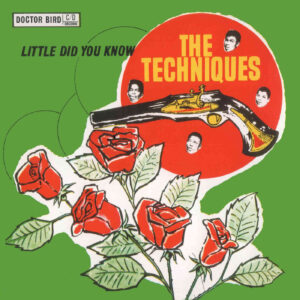 The first official reissue of key vocal group the Techniques’ rare 1968 album, which collected some of their biggest hits during the ska and rocksteady eras. This edition comes with 21 bonus tracks which covers all of the band’s Treasure Isle recordings for Duke Reid….LTW’s Ian Canty hears an outfit with singing talent to burn….

The pivotal figure in the Techniques’ story was one Winston Delano Riley. He started the band and oversaw an almost complete line up change over the years, but he still kept the various aggregations at the forefront of the Kingston music scene in the 1960s. Being a local boy he got his start early, forming a band with fellow Kingston High School pupils Franklyn White, Frederick Waite and Keith (soon to be Slim) Smith. When known as the Victors the youngsters learnt instruments to add to their obvious vocal talents, in effect presenting one of the first “complete” Jamaican groups that could sing, play and write their own material.

Their first recording as the Techniques was No One (Like You Do), cut for The Real Jamaican Ska compilation album in 1964. They then made a mark with a couple of singles for Sonia Pottinger’s Gay Feet label, Heartaches and What Love Can Do, but an introduction from Stranger Cole to Duke Reid really set the Techniques on the road to success. Going through the later period of ska and into rocksteady, the Techniques’ were a hit machine that just did not stop.

The Treasure Isle set up was primed for success during the rocksteady era and even though the original members of the band bar Riley had flown the coop by 1967, the smashes kept on coming. Their pre-eminence as the island’s top vocal group even incurred the wrath of Bob Marley And The Wailers, which almost became physical when the leader of that band pulled of knife on Slim Smith after another show-stopping Techniques’ live performance.

Slim Smith opted for a solo career in 1966 before eventually forming another high quality vocal team the Uniques with Franklyn White and Roy Shirley. Riley brought in Bruce Ruffin and Junior Menz, with the latter being replaced by Pat Kelly amid some more personnel shuffles. This version of the band ruled the roost during rocksteady with hits such as My Girl and Queen Majesty, a cool reworking of the Impressions’ Minstrel And Queen.

By the time that the Techniques left Treasure Isle in 1968 a few more talented folk had passed through their ranks, including Dave Barker who would go on to have a UK number one hit in 1970 with Riley’s production of Double Barrel. The band themselves had split up the previous year, with Winston Riley’s time now taken up by his studio work. That was that for the Techniques, bar a brief reformation in the early 80s. Riley himself though would have success through the years, always adapting smoothly to the changing trends on the Kingston music scene. He died in January 2011 after being shot – a tragic end for a key figure in Jamaican music across five decades.

One thing I do have to take issue with is the cutting down of the original Little Did You Know album to a paltry seven tracks. What has happened is that the compliers have taken out four Baba Brooks instrumental offerings that rounded out the 1968 release of the LP and also Please Say You Are Mine, a bit of a mystery song that. Which just leaves the remainder of the Techniques efforts. They have done so with the best interests at heart, as the Baba Brooks efforts don’t really have relevance to the Techniques. Doctor Bird’s generally exemplary reissues have loped tracks off on the odd occasion, some times for valid copyright reasons, at others (like here) because they aren’t relevant. I can understand the reasoning, but I’m sure I don’t just speak for myself in saying I just wish they left the original record intact here and in most other cases too. After all it’s not really a re-release of the album if only half the tracks remain.

Anyway rant over, because the actual music included is superb. The album itself is broadly split into late entries into the ska canon and a couple of sound rocksteady tunes. The title track is one of their greats and leads off the set in fine style, with a driving rhythm and some smooth as silk vocals, simply gorgeous. My Whole Life Depends On You has that classic jazz-inflected ska sound and if the audio quality is a wee bit more muffled and the singing earthier, it still has a very sweet groove indeed. Away from the LP Travelling Man is a great example of what the Techniques excelled at, slow-ish but still dance-friendly, with those clear as a bell harmonies.

The organ riff of Wat’cha Gonna Do seems to pre-empt the skinhead/boss reggae sound of a year later and the take of r&b standard I Wish It Would Rain appears even further ahead, it would have fit in the mid-1970s with its beguiling summer reggae feel. 1967’s Bad Minded People chimes in with the “don’t be a rude boy” sentiments of that time well, showing that the band weren’t blind to social issues and at the other end of the scale ’til My Dying Die is a real fresh blast, a devotional love song with a touch of gospel influence. Love Is Not A Gamble, a riff on the Imperials’ doo wop classic Tears On My Pillow, is a fine example of the band at their best. The skanking rhythm was so infectious that it was reused many times in reggae circles over the years.

Coxsone Dodd credited the Techniques with being the most popular group in the land before the Wailers started to make headway and that’s good enough for me. They were ideally suited to rocksteady where the vocal prowess of their lead singers Slim Smith, Pat Kelly and Bruce Ruffin could take centre stage. Treasure Isle, with its crack band of musicians on hand, provided the perfect backing for them to thrive and thrive they certainly did. Everything here is beautifully sung and still an open invitation to the dancefloor even in 2020. Despite a few misgivings about how the original is presented here, this collection all adds up to a brilliant selection of rocksteady from the Techniques, the masters at their craft.