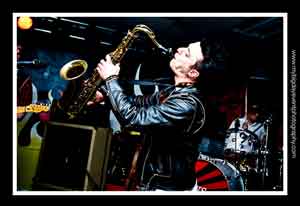 The Talks are from Hull. In the ordinary way of things this would be unforgivable. For those who aren’t acquainted with the history of cross Humber rivalry I’ll explain briefly. At some point around the turn of the last century the Hull dockers broke the dock strike and left the Grimsby dockers high and dry. Or the other way round. Or both. Nobody remembers. But the resentment lingers on and the rivalry festers, although I have heard that actually it’s pretty one-sided and that Hull consider their main rivals to be Leeds. They barely know we exist and that hurts. You may say we should have got over it by now, the fact is that it’s only a hundred and fifteen years and these things take time.

As part of the reconciliation process, however, we sometimes invite bands from the north bank to come and entertain us with their musical wizardry and in that spirit of rapprochement it’s down to The Yardbirds to spend the evening with the Talks. The Talks’ music is a potent fusion of punk, ska and reggae with some little hints of rap thrown in for good measure, with swirling keyboards, big saxophone breaks and loads of energy and attitude and they’ve attracted the attention of Hull’s resident music guru Paul Heaton among many others. They’ve toured extensively, played Glastonbury and supported The Specials on their reunion tour and they’re involved with The Specialised Project, for whom they’ll be playing gigs later in the year.

They open their set with songs from the Two Tone end of their repertoire, introducing their biggest success to date, Can Stand The Rain, (which they recorded with the legendary Neville Staple of The Specials), a slice of old school Jamaican style ska, quite early on. It’s a great tune, an angular and insistent toe tapper, and embellished with some fine saxophone and a rapped chorus and it goes down a storm despite a brief hiatus caused by a broken microphone. The B side from the single Why Did You Bring It Up follows with a sly spring in its step – close your eyes and you could be in a little dance hall in Kingston with a pork pie hat and a big cigarette – and Life In Colour, from last year’s West Sinister EP takes proceedings on a more political path. There’s some pithy social comment here in a song that’s a second cousin in spirit to The Special’s Ghost Town and it shows the proficiency of The Talks as songwriters –

“These people around here are fed up, all smoked out
Shops are all boarded, left empty and closed down
Our radio brings news says we’ll never recover
Followed by a jingle that’s promoting deals at Tescos”

As the set progresses the ska influences fade a little and the band’s punkier material comes into the foreground. The highlight of the section is Friday Night, a fast-paced tribute to the joylessness of middle management life and the redemptive qualities of alcohol –

“Now he’s sinking, down the pub again,
And he’s propping up the bar,
Dribbling Stella down his chin.
Now he’s steaming,
Can’t contain himself,
He spits from drownded guts
Digging up dead and buried dirt.”

It’s visceral stuff and The Talks deliver it with verve and punch. The show closes with the band being joined on stage by the Dead Dads for a finale of Hands Off She’s Mine and for a few moments we are lifted away from the sordid world of inter-riparian tensions towards a better place where people from Hull and Grimsby can live side by side in peace and harmony.

Maybe another hundred and fifteen years will do it.