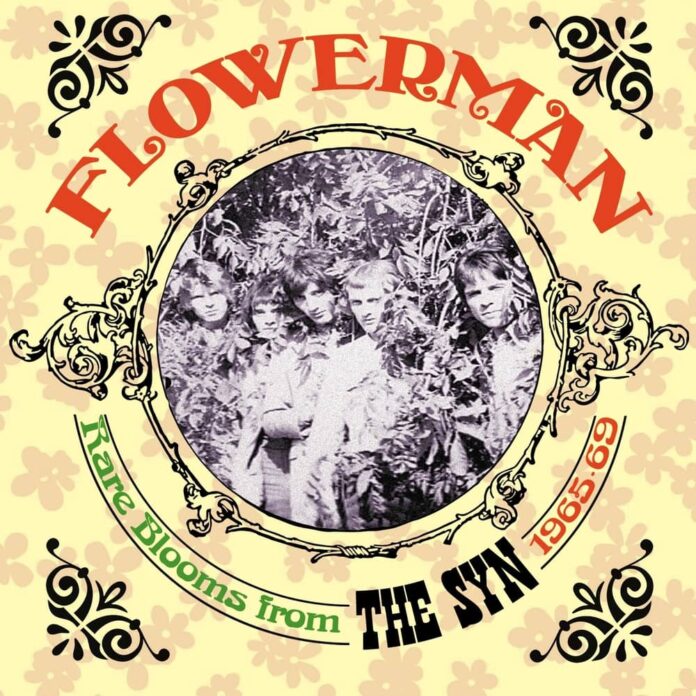 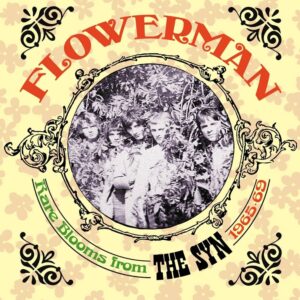 Subtitled Rare Blooms From The Syn 1965 -69, this new collection brings together all the remaining recordings of the mod/psychedelic band that provided a couple of members for prog rock kingpins Yes. This set also features a pair of tracks from The Syn’s predecessors The Selfs and two 1974 recordings by the oddly named Narsquijack, a Chris Squire project that brought him back together with fellow Syn band members Steve Nardelli and Andrew Pryce Jackman. Ian Canty pleads for forgiveness…

The recording line-up we hear on Flowerman came together when the original Syn, previously known as The High Court, joined up with their local beat group rival The Selfs. From the earlier Syn came guitarist John Painter and singer Steve Nardelli. The Selfs yielded Chris Squire on bass, drummer Martyn Adelman and Andrew Jackman on keys. The five-piece soon started playing a live set featuring soul/r&b, covering numbers from across the Tamla Motown archive with the odd original. A small step forward for them came in the first part of 1966 when a demo of Merry-Go-Round, cut at Advision on Oxford Street, was aired on Radio Caroline.

Their approach at this stage was similar to Mod heroes The Action, but they were not immune from the changes at work in the UK pop scene. A residency at London’s famous Marquee venue was a stepping stone to getting record company attention, but it was also crucial that they moved away from the soul covers to penning more of their own material. Nardelli came up with Grounded and the extensive Flowerman and with Jackman wrote 14 Hour Technicolour Dream and an imaginative piece entitled The Gangster Opera. These songs helped The Syn to move on up into the future.

By the time they signed to Decca’s progressive imprint Deram, they had replaced Adelman with Icelandic drummer Gunnar Hakonarson and Painter had left too. One Peter Banks, ex-The Devil’s Disciples, joined in his place. Unfortunately, the label insisted they recorded the sarky debunking of 1960’s stylists Created By Clive as their first single. Ironically, The Attack were also made to record the tune for main label Decca and the lack of what some used to call “joined-up thinking” meant both versions were released on the same day. Personally, I think the song itself is a charming enough slice of sub-Kinks parody, but The Syn hated it and the 45 predictably did nothing.

An edited version of Flowerman was the second and final Deram single. It was popular in mainland Europe and resulted in tours of Germany and France, but The Syn were dealt a hammer blow when Gunnar decided to go back to his homeland. Banks and Squire began to look around for other options and the band began to disperse. Ayshea, from the TV series Lift Off!, recorded the Syn’s Mister White’s White Flying Machine and Jackman, Squire and Nardelli recorded in the 1970s as Narsquijack, but, for most of the time, The Syn were reduced to a footnote in Squire and Banks’ rise to the top with prog behemoths Yes.

It is fair to say that the first track on Flowerman, Merry-Go-Round, is very rough sonically, coming from a crackly acetate source. But taking that to one side for a moment, the tune itself is a fairly groovy piece of beat pop with a freaky guitar part that is a main ingredient of its impact. It is clear from the outset that the eerie, high backing vocals of Squire and Jackman were something that provided The Syn with a different edge from many bands of similar vintage. Their soul/r&b background comes over on this piece too, making me wish that a better sounding recording was available.

The despised Created By Clive single is, for me anyway, a decent and fun slab of pure late 1960’s whimsy. But having said that, the flipside, the first song penned by the band, Grounded, is far more interesting. The flowing soul-psych mash-up of the tune is original and the keyboard power pressed into service is really cool. The band reconvened in 2004 to cut another version of this tune and do a pretty good job too in a Hawkwind style. Flowerman itself is a solid flower power pop groove and the slow-burning fizz and eventual euphoria of its flipside, 14 Hour Technicolour Dream, is equally catchy and enjoyable and no, The Syn didn’t play that gig.

A rehearsal tape of The Gangster Opera is the only evidence that survives of this keystone of The Syn’s live show. Unsurprisingly this recording is again more than a bit dodgy, with drums and vocals the most audible sounds. When the keyboards manage to assert themselves a strong soul influence detectable here, but this is bootleg quality at best and eventually the song collapses into a band discussion. Then comes a demo of Flowerman cut at the Marquee Studios. This is a much better recording and the overall effect is just a touch more laidback than the single take.

All of the above confirm that The Syn definitely had potential. I for one wished that more of their material had been taped at the time, as the collection is brought up to a reasonable running time from this point onwards by before and after the fact recordings.

Firstly we have the two sides of The Selfs’ 1965 demo single. A workmanlike cover of The Who’s I Can’t Explain is joined by the surf rock-influenced band original Love Me. Again the audio is murky and there isn’t much to differentiate these two tunes from what bands all over the UK were doing at the time. Andrew Jackman got together with vocalist Denny Ward to produce the brass-led recording of The Syn’s The Last Performance Of The Royal Regimental Very Victorious And Valiant Band in 1969, which is the next offering present. Even though it isn’t really The Syn as such, what’s here is a well-produced example of ornate late-psychedelia that is satisfying enough.

The same year, Squire and Jackman were on hand when TV presenter Ayshea wanted to cut another Syn track, Mister White’s White Flying Machine. The song was featured as a single and included on the erstwhile Mrs Brough’s 1970 LP. Aeroplane sound effects pepper an orchestral pop sike tune that is well performed and reasonably agreeable. Then we have the two Narsquijack numbers from 1974, where three-fifths of the original Syn line up regrouped as part of this production company. Piano, guitar and vocals only feature on the lo-fi Cadillac Dreams and Sunset Boulevard Lament. They’re interesting historically and fair tunes, but hardly essential. Rounding things off we have that 2004 Grounded take, that is endowed with a space rock sheen.

What we are given on Flowerman is slight, with only eight of the tracks included here being truly The Syn’s slim legacy. Having said that, what’s present that is actually the band themselves sounds good and does deserve to be heard. These compositions point to a happening psychedelic outfit with a fair dose of imagination and innovation, though I’m not sure that there is enough to tempt a lot of people apart from Yes completists and sixties anoraks like myself. But I did enjoy the majority of what is here, despite the iffy sound quality on a few of the selections. The Syn were unfortunate in not attracting more attention back in the 1960s and there is a good amount of evidence here that they could have become something special, with a bit more luck.