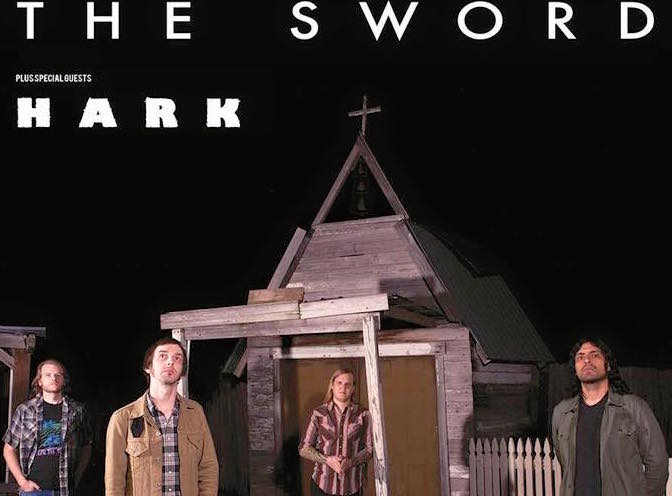 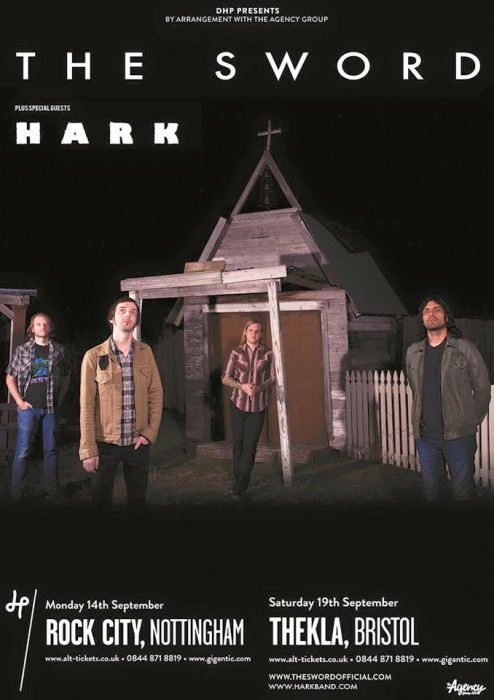 Texas metallers, The Sword have just released their fifth album, ‘High Country’, to resounding critical acclaim, taking their southern ‘Sabbath’ influenced sound closer to such classical rock influences as ZZ Top & Thin Lizzy, that have bubbling under their songs throughout their fourteen years together.

Unafraid to challenge themselves with high concept narratives as in 2010’s, ‘Warp Riders’ and the energetic, huge sounding, ‘Apocryphton’ in 2012, The Sword are boldly riding forth, flags raised aloft in the name of the kind of classic rock that got kicked aside during the last two decades.

Support tonight comes from South Wales finest HARK. Each time I see this band live, they seemed to have stripped away more of the unnecessary, and honed in on the essential core elements that makes their music so direct and effective. Lead singer and guitarist, Jimbob Isaac guides each song with such commanding presence, conjuring riff upon riff until some sort of magical alignment takes place. Drummer Simon Bonwick’s masterly playing matches that of bassist Joe Harvatt to form such a solid foundation, assisting Jimbob’s experimental flourishes and blistering solos to reach incredibly high altitudes.

Recent single, ‘Palendromeda’ sounds particularly hard and heavy tonight. Jimbob’s vocals cut through the music sounding better and more ferocious than ever. Their consistent touring schedule since the release of their debut album, ‘Crystaline’ last year has definitely helped the band become one of the most impressive live acts out there right now. Head over to their website and listen for yourselves, you won’t be disappointed.

The Sword have amassed a decent crowd here at the Thekla who seem genuinely excited by new songs. The playfully fuzzy intro track, ‘Unicorn Farm’ and ‘Buzzards’ off the new album get the room rocking with head banging from the outset. They are certainly taking big, bold steps forward with their sound, adding very progressive elements as well as pushing the more melodic side of lead singer and guitarist, John D Chronise vocals.

Throughout the set new tracks like, ‘High Country’ and ‘Empty Temples’ show a maturing band that’s not afraid to challenge themselves by distilling their heavy essence to include more classic rock dynamics. Guitarist, Kyle Shutt’s tight double harmonic leads and classic songwriting chops make these some of the highlights of their hour and half set.

Older, more stoner tracks like, ‘Freya’ and ‘Horned Goddess’ off their first album, ‘Age Of Winters’ remind us why we love this band and it’s humongous rhythm section of drummer, Jimmy Vela and Bassist, Bryan Ritchie.

With riffs this huge and tight, and grooves as deep and long as the Grand Canyon, The Sword are tapping into some epic vibes here, sounding even better live than on record. The almighty, ‘Dying Earth’, instrumental ‘Suffer No Fools’ and the pummeling, ‘Arrows In The Dark’ end the set perfectly, leaving a room full of happy sweaty rockers to nurse bad necks and ringing ears from the beautiful abuse.

HARK can be found online harkband.com. They’re also on Facebook and twitter, as @harkbandhark, and have a Big Cartel.