Home Music Bands The Stranglers and We Have Band – Fete du Cognac – live...

The Stranglers and We Have Band
Fete du Cognac, France
28 July 2012

Catching a band or two on your holidays is always good, but what about The Stranglers in France with three kids in tow? Dave Jennings caught the band headlining the rather lovely Fete du Cognac at the end of July.ÃÂ

Having already booked the annual family holiday in France, fate was smiling on us when The Stranglers confirmed their headlining date at the Cognac Festival, supported by We Have Band. A basic entry price of 5 Euros and free for children made the event even more attractive.

We arrived in Cognac in mid-afternoon and checked into our hotel which actually provided us with a room for 5 people. Parents with 3 kids will know how welcome this rarity was. Following check-in we wandered around the beautiful town of Cognac which was a lot quieter than I expected with such a big festival on later.

On arrival at the festival it was quickly obvious that this was more a celebration of food and drink with music, rather than a music-focused event. We had paid extra for tickets that entitled us to a full menu and as we entered the site the scale of organization became apparent.

Different booths were catering for the various items on the menu such as salads, kids menu, steak and snails and ensuring the thousands of festival goers didn’t have to wait too long before attempting to find a seat along the crowded, but beautifully lit river bank. The flames lighting decorated iron fencing had to be seen to be believed, each being individual works of art and adding to the very convivial atmosphere.

At 9.30pm, as the sun was setting, We Have Band took the stage. Emerging in 2008 and gaining a solid following due to their transfixing live performances at a number of festivals like Lovebox, Glastonbury, Latitude, Isle of Wight and V, WHB played an amazing set of songs from their latest album ”ËTernion’ and earlier material. The layout of the festival site, with most people sitting along the river both sides of the stage, meant it was a challenge for WHB to tempt an audience in front of the stage.

However, the compulsive stage presence of Darren, Thomas and Dede ensured that many festival goers were soon deserting their jealously guarded tables to enjoy WHB’s music, which has been described as ”Ëdepressive disco’ and ”Ëpunk funk’, though two of my family could hear traces of Echo and the Bunnymen in there so take your pick really. This was a memorable performance from WHB who are currently in the middle of a hectic schedule that sees them appearing all over Europe and in South America.

After further local produce had been sampled, The Stranglers stage-time of 11pm drew near and around 8,000 punters were awaiting the main act. We were fortunate to secure a spot at the front facing JJ Burnel’s side of the stage.

As the stage lights dimmed and The Waltzinblack blasted out into a perfect summers evening, I couldn’t help but think of the many different venues I’d heard this rallying call for all Stranglers faithful over the previous 30 years.ÃÂ I also felt incredibly lucky to have a family who share my love of music and to be able to enjoy a live performance with them which, due to ticket prices, is usually not possible (but that’s a debate for another day).

From our vantage point we had a clear view of JJ and Jim MacCauley who is standing in for the recuperating Jet Black (get well soon Jet), make their way from the backstage tent and on stage. Straight away the familiar kick drum signaled the intro of the barely repressed menace of ”Ë5 Minutes’, followed by ”ËSometimes’ and ”ËThe Raven’.

Looking around it was clear that all areas around the stage were now packed with festival-goers of many nationalities, a number sporting Stranglers T-shirts, all enjoying another peerless performance by one of the UK’s finest ever bands. With the moon now shining brightly, and people in boats moored at the jetties near the stage dancing, the band ran through a mix of tracks from their excellent new album Giants and long standing classics.

Having originally expected a truncated ”Ëfestival set’, it was a pleasant surprise to realize we were actually receiving a full Stranglers set with the retention of welcome old classics from the spring tour such as ”ËRise of the Robots’, ”ËShut Up’, ”ËWalk on By’ and ”ËBurning Up Time’ as well as more contemporary favourites like ”ËRelentless’, ”ËLost Control’ and ”ËUnbroken’. We finished with an encore of ”ËNice and Sleazy’, ”ËDuchess’ and ”ËTank before the band left the stage having proved once again, as if they needed to, that class is permanent.

During the set, JJ took the trouble to wave at my kids a few times and they each left with one of his personalized plectrums as souvenirs. Well done Mike, Lizzie and Chris for lasting the pace and staying enthusiastic until close to 1 am, hopefully you’ll always remember the night.

As we left the riverside, it was clear that the party would go on long into the night as the flames still burned and DJ’s were just getting into their stride. Having attended many gigs over 30 plus years, I knew that this one would always offer great memories for many different reasons.

All words by Dave Jennings. You can read more from Dave on LTW here. 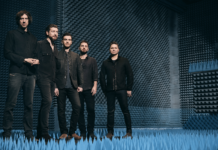 October 5, 2019
We use cookies to ensure that we give you the best experience on our website. If you continue to use this site we will assume that you are happy with it.Ok