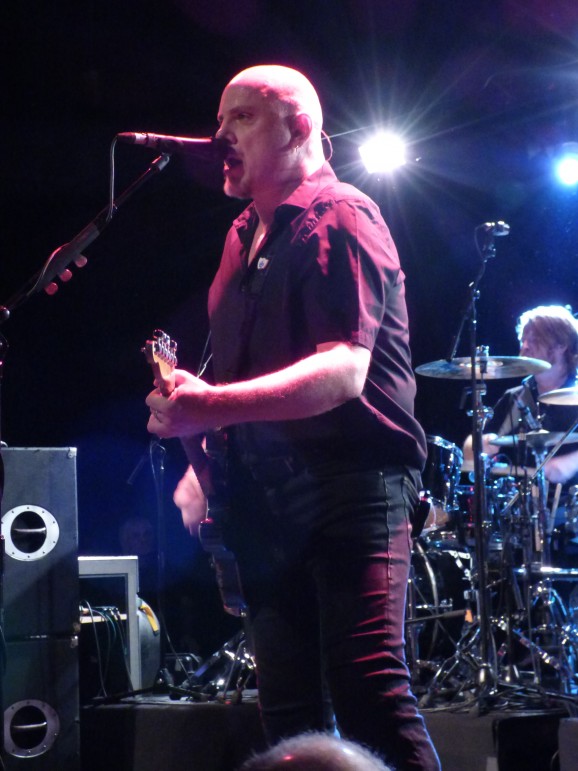 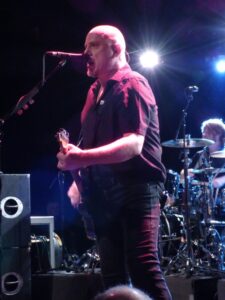 First night of a Stranglers European jaunt taking in 5 countries. The venue is a modern 750 capacity arts/youth centre. It’s a very well set out operation, some 20 odd km west of Paris at the end of the RER line. A wander round the town reveals a wealthy area with a huge amount of shops, much bigger than say Stockport is to Manchester. We miss the support as we’re eating on the clean, well lit town square. Once inside the venue we discover a well appointed bar with friendly staff and a small(ish) live room with maybe 300 terrace style seats at the rear, a small balcony and a medium sized dances floor for about another 350. There’s a few Brits in the audience, but not many.

The lights go down, “The Meninblack” intro tape runs, the band walk on stage, its straight in to a hard fast “Toiler On The Sea.” Quickly a one man wild dervish of a moshpit breaks out to my left, and we’re off. The sound is stunning, loud but perfectly clear, there are no security stage front, but we don’t need it, there’s a friendly moshpit of 40 or so, and plenty of room to breath for everyone else. I only take my spot 5 minutes before the gig and I’m on the third row with no crash barriers, I’ve never been this close to them. 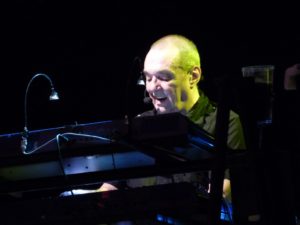 They cut quickly into “Straighten Out” then quickly again into “Grip”. The set is a mix of post and pre Hugh songs, the difference not noticeable at all these days. Newer songs like ” Relentless” and “Norfolk Coast” sounding and being received as well as “5 minutes”.

The band are on great form, and clearly in a good mood, there’s obviously a lot of love in The Stranglers camp these days, from Baz playing up to JJ, the pair of them lurking and strutting round the smaller than usual sized stage, Dave playing keyboard solos one handed so he can have a drink (and getting a great cheer) and Baz winding up the roadies trying to fix his pedals. It’s warm out front, Baz throws a towel to/at a fan he knows. A 5 year old kid appears dancing in the front row mid set and Baz hands him a plectrum whilst playing. The kids face beams and he proudly gives it his dad for safe keeping. 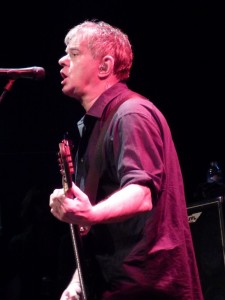 They’re an absolute joy to watch, and this is certainly up there with one of the best times I’ve seen them. On “Time Was Once On My Side” the sub bass on Dave’s keyboard solo is so loud that my internal organs are vibrating, brilliant! The same loudness trick is employed on JJ’s teasing bass intro to “No More Heroes” at the end of the set too.
Tonight’s set is about a third each, newer songs, pop singles and punk classics. There’s a few lesser played songs, ” European Female” “Tank” and “La Folie in the encore, and ” I Feel Like A Wog” mid set. Well paced out.

The tour continues for another 2 weeks or so