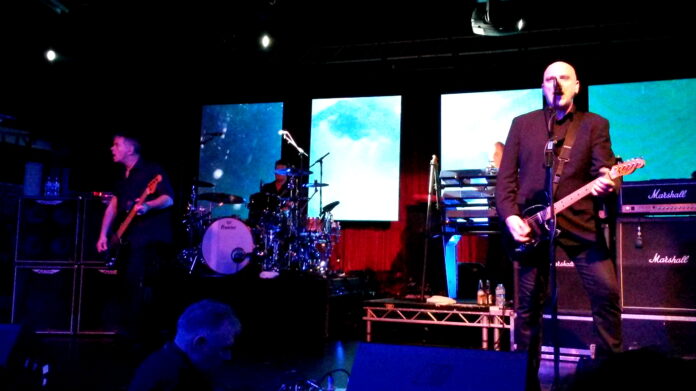 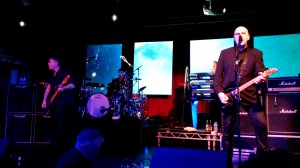 Few bands celebrate 40 years in the music business. Fewer still can claim to have  had such an eventful Ruby anniversary as The Stranglers. The band have now spanned five decades and come a long way from their humble beginnings riding around in an old ice-cream van in Guilford. But the band, if anything, have always be durable and resilient. They’ve survived members doing time inside, riots, vilification by the music press and the loss of their iconic former front-man, Hugh Cornwell. Few bands have endured the loss of their frontman. However, The Stranglers have positively thrived in recent years under the tenure of their third front-man, Baz Warne. 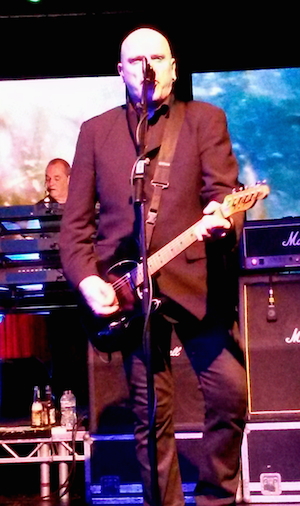 One of the things that has kept the band’s live shows fresh and dynamic is their unwillingness to just plunder their back catalogue, insisting instead on writing new material. The current album “Giants” is a testimony to that and is a vintage Stranglers long player. Couple that with the band’s incredible recording legacy and it is perhaps easy to understand why their live shows are so much more than just a run through a greatest hits package. There are many hits in tonight’s 28-song set that includes at least one track from each of their seventeen studio albums. We get a taut and nailed down “Nice’n’Sleazy” with possibly the greatest bass intro of all time. They even dispatch their most famous track, “No More Heroes” three songs into the set. “Golden Brown” shimmers like some sort of medieval pop gem. On “Hanging Around” the interplay between instruments personifies what has always set them apart from their one-chord counterparts, alining them more with The Doors rather than, say, The Damned. And how many bands can afford to leave tracks like “Toiler on the Sea”, “Walk on By” and “Down in the Sewer” out of their set? Tonight the absence these longer tracks allows them the luxury of being able to visit nooks and crannies of their back catalogue not considered on previous tours. There’s the brutal and menacing “Threatened” from 1978’s “Black and White” album sung by Jean-Jaques Burnel. Keyboard wizard Dave Greenfield gets a rare vocal outing on “Peasant in the Big Shitty”. And then there’s the sledgehammer sonics of “Sommat Outanowt” from “Suite XVI”. Later on in the set, while listening to Burnel’s superb vocal delivery on a cinematic “North Wind Blows”, it’s hard to fathom out why he all but gave up on vocal duties during the Paul Robert’s era of the band. 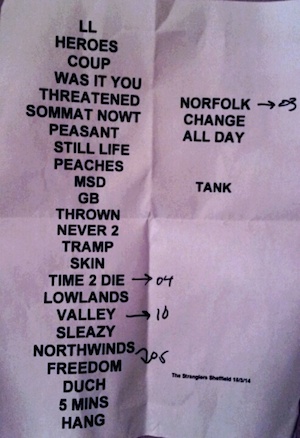 For a minority a Cornwell-less Stranglers still remains an unpalatable proposition. If truth be know though, the band were a pale reflection of their former selves with a disinterested Cornwell at the helm at back end of the 80s. The final Alexander Palace gig was a particularly painful spectacle. Fortunately though, the majority of fans have stuck with them and recognise the heavyweight musical contribution and re-establishment of a gang mentality that Baz Warne has brought to the fold. So established as the bands co-front man now is he that it is genuinely hard to imagine the band working with their former front-man. Certainly the band’s current rude health is in no small part down to the ex-Toy Doll’s man . His ability to simultaneously not try too hard to sound like Cornwell while not sounding dissimilar from him is the key. He’s not talent shy in the guitar department either, while his intuitive bond on-stage with Burnel was something that was most definitely missing when Paul Roberts was in the band.

The sizeable Sheffield crowd lap it all up and the middle-age mosh pit gets pretty lively at times. A bit too lively on one occasion (Baz Warne:  “I’m keeping my eye on you two”). The band have always had a special relationship with their fans and over the years the “Family in Black” have remained fiercely loyal to them and some of their pictures periodically flash up on the big screen behind the band during the set. The only disappointment of the night is the non-appearance of Jet Black. “Jet’s not well and he’s sorry he can’t be here with you tonight” announces Baz. It’s hard not to think that the band will shortly be entering a new post-Jet Black phase. If that is to be the case current drums-stool incumbent, Jim MacAulay, would be a fitting replacement for the band’s elder statesman. 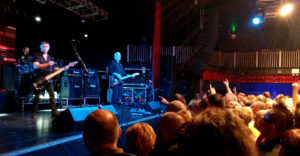 Frankly there are too many highlights in a set of contrasts to count them all up. Personal faves were “Five minutes”, “Skin Deep” and “Duchess”, the later containing the best rhyming couple in musical history ever (“Sits in her terrace, says she’s an heiress”). And which other band has produced a song so lyrically violent as “Five Minutes” yet produced something as beautiful as “Midnight Summer Dream”? Probably no other band. For encores we get the sweeping “Norfolk Coast” and a poptastic “All Day and All of the Night”. And JJ’s bear torso, still in great shape and definitely one for all the ‘Women in Black’. A ballistic “Tank” brings down the curtain on what’s been a fantastic set and a fitting end to a gig celebrating 40 years of The Men in Black. The Stranglers should go down in history as the most successful punk band the planet has seen, despite the band claiming they weren’t punk. Whether they get to the next big 50 year milestone is not certain but even if this did transpire to be the last tour for the band, they would go out on a high with their legacy already cemented as one of the best British bands from the last fifty years.