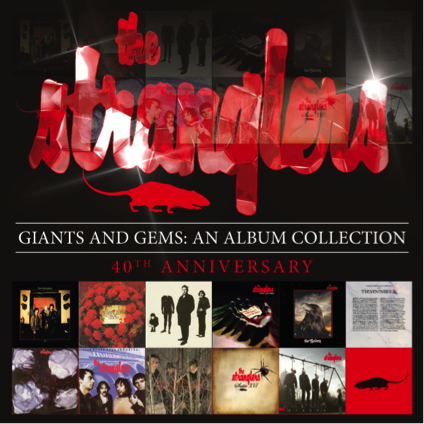 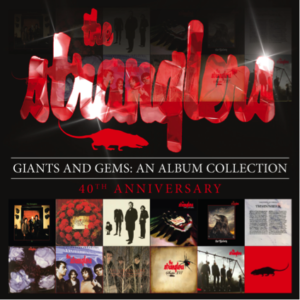 We hear that Parlophone Records are due to release a 4Oth Anniversary Year 11 CD box set of The Stranglers recorded on ‘The Ruby Anniversary Tour’. It will be titled ‘Giants And Gems: An Album Collection’. Also announced are UK shows from 27th February To 29th March.

In celebration of a remarkable band, Parlophone Records and Warner Music are proud to announce a career-spanning box-set from The Stranglers. Marking their 40thAnniversary ‘Giants And Gems: An Album Collection’ is an 11-disc anthology which includes eight studio albums from the band’s UA/Liberty years (1977-86) plus the 1977 set ‘Live At The Hope And Anchor’, the rarities collection ‘Off The Beaten Track’, and The Stranglers’ two most recent albums, ‘Suite XVI’  (2006) and the hugely acclaimed ‘Giants’ (2012).

Since forming in 1974, The Stranglers have enjoyed huge success worldwide including 23 Top 40 hits singles and 17 Top 40 studio albums in the UK alone. ‘Giants And Gems: An Album Collection’ contains many of the greatest milestones in the band’s career such as their notorious debut album ‘Rattus Norvegicus’, and the legendary hits ‘Peaches’, ‘Hanging Around’, ‘(Get A) Grip (On Yourself)’, ‘Something Better Change’, ‘No More Heroes’, ‘Nice ‘N’ Sleazy’,  ‘Walk On By’, ‘Duchess’,  ‘Nuclear Device’, ‘Golden Brown’, ‘La Folie’ and ‘Strange Little Girl’. Full details and tracklisting is below.

Ahead of the release of the box-set, The Stranglers set out on the UK-leg of their ‘Ruby Anniversary World Tour’, playing 22 shows starting in Inverness on February 27th and including a return to Hammersmith Apollo, where they have played many of their most infamous gigs, including their first visit there in 1976, a sold-out performance before they had even released their debut album. The Ruby Tour will feature the band playing tracks from all 17 of their studio albums each night, with an ever-changing setlist ensuring fans will get to hear long-lost gems as well as firm favourites.

These shows, and the ensuing ‘Giants And Gems: An Album Collection’, will demonstrate why The Stranglers became figureheads of punk and then transcended genres to become one of the most revered alternative bands of the last four decades.

Disc 1 – Rattus Norvegicus (Stranglers IV)
Sometimes – Goodbye Toulouse – London Lady – Princess Of The Streets – Hanging Around – Peaches – (Get A) Grip (On Yourself) – Ugly – Down In The Sewer; Falling; Down In The Sewer; Trying To Get Out Again; Rats RallyDisc 2 – No More Heroes
I Feel Like A Wog – Bitching – Dead Ringer – Dagenham Dave – Bring On The Nubiles – Something Better Change – No More Heroes – Peasant In The Big Shitty – Burning Up Time – English Towns – School MamDisc 3 – Black And White
Tank – Nice N’ Sleazy – Outside Tokyo – Sweden (All Quiet On The Eastern Front) – Hey! (Rise Of The Robots) – Toiler On The Sea – Curfew – Threatened – In The Shadows – Do You Wanna – Death And Night And Blood (Yukio) – Enough Time

Disc 6 – The Gospel According To The Meninblack
Waltzinblack – Just Like Nothing On Earth – Second Coming – Waiting For The Meninblack – Turn The Centuries, Turn – Two Sunspots – Four Horsemen – Thrown Away – Manna Machine – Hallow To Our Men

Disc 10 – Suite XVI
Unbroken – Spectre Of Love – She’s Slipping Away – Summat Outanowt – Anything Can Happen – See Me Coming – Bless You (Save You, Spare You, Damn You) – A Soldier’s Diary – Barbara (Shangri-La) – I Hate You – Relentless

THE STRANGLERS – 1974 to 2014
Formed in 1974 as The Guildford Stranglers, the band were initially based in The Jackpot, an off-licence run by their drummer Jet Black. Quickly developing a pub-rock following they were soon swooped into the punk movement, opening for both Patti Smith and The Ramones on their British tours.

Releasing their first three albums – ‘Rattus Norvegicus’, ‘No More Heroes’ and ‘Black And White’ – within 13 months of each other and scoring hit singles with the likes of ‘Peaches’, ‘Something Better Change’ and, of course, the track ‘No More Heroes’ itself, The Stranglers quickly trademarked their sound; a swirling, heady concoction of psychedelic keyboards, growling vocals, hard-edged bass and an almost jazz-like drum sound.

But it was their attitude to the music press that really set them apart. Accused of being both sexist and racist by critics who didn’t see the patent absurdity and sarcasm in their lyrics, The Stranglers chose the path of most resistance and went to war. Notorious spats included punching the journalist Jon Savage at a public event, leaving another journalist strapped to a wheelchair in Reykjavik airport while his plane departed and gaffer-taping a third writer to a girder on the first floor of the Eiffel Tower with his trousers round his ankles. The list of misdemeanors is endless.

While these ‘japes’ hardly endeared them to the press, they didn’t harm the band’s popularity as they racked up more and more hit singles and broke box-office records including the most consecutive nights played at London’s Roundhouse, beating records set by the Rolling Stones and The Who. So it was no surprise that the 80’s saw The Stranglers spring to even greater heights of commercial success all around the world with the likes of ‘Golden Brown’, ‘Strange Little Girl’, ‘Always The Sun’ and ‘European Female’, amongst many others.

Having released their 17th studio album in 2012, ‘Giants’, to across the board critical acclaim from their once-loathed adversaries in the press, The Stranglers are now revered as one of the most exciting, credible and influential bands to have emerged from the British new wave scene. Proof that the original meninblack, The Stranglers, are as essential today as at any time in the last 4 decades… and showing that they do indeed laugh longest and loudest.