Home Music the Stranglers announce March 2016 tour that sees them play the whole... 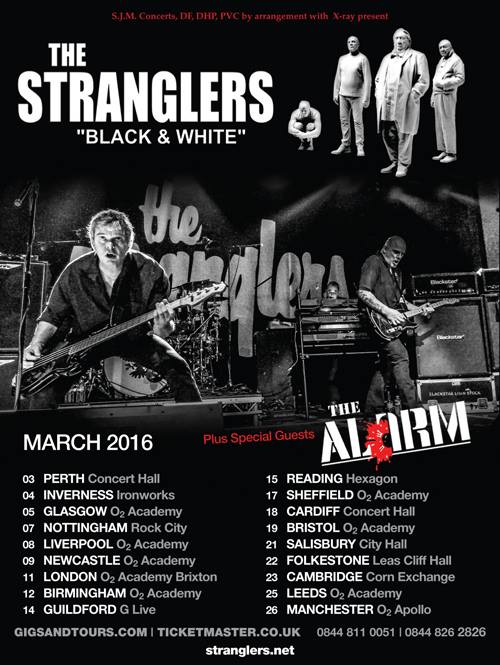 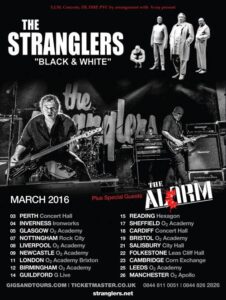 The Stranglers March 2016 tour will see them showcase their legendary 1978 Black & White album (read the Louder Than War appreciation of our favourite Stranglers album, Black and White) in its chronological entirety during their set. The 18 date itinerary kicks off with a trio of gigs north of the border, visiting Perth on the 3rd, Inverness on the 4th and Glasgow on the 5th. The tour then heads south, via Nottingham, Liverpool and Newcastle before the London date on Friday 11th at the 5000 capacity Brixton Academy- a venue which the band last played 25 years ago back in 1991. After a hometown date in Guildford, the tour takes in some less visited places including Reading, Salisbury and Folkestone before the final gig in Manchester on the Saturday 26th. Shifting from their recent home at the Academy, the band return to the legendary Manchester Apollo where they played regularly between 1978 and 1990, with its 3500 capacity, it will be a fitting finale to the tour. We’re also pleased to announce that the special guests for the complete tour will be Welsh rockers The Alarm featuring Mike Peters. Tickets will go onsale from 9am Friday 18th September and we will add ticket links in due course. See you on tour…Black & White becomes…
Here’s the full March tour dates:
03 Perth Concert Hall
04 Inverness Ironworks
05 Glasgow O2 Academy
07 Nottingham Rock City
08 Liverpool O2 Academy
09 Newcastle O2 Academy
11 London Brixton O2 Academy
12 Birmingham O2 Academy
14 Guildford G-Live
15 Reading Hexagon
17 Sheffield O2 Academy
18 Cardiff University Great Hall
19 Bristol O2 Academy
21 Salisbury City Hall
22 Folkestone Leas Cliff Hall
23 Cambridge Corn Exchange
25 Leeds O2 Academy
26 Manchester O2 Apollo