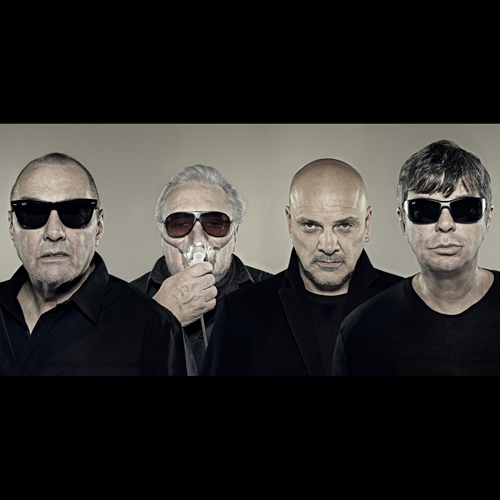 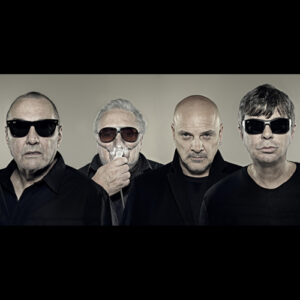 The Men In Black hit Manchester  with an impeccable night of inspiring,  rattling tunes bathed in a sound as fresh as the day they were written.

If those in government needed at least some evidence that Britain’s population is ageing disgracefully but very capably, they need only to pop along to a Stranglers gig. Amongst the relatively sprightly throng of middle aged folks you’ll find walking sticks, wheelchairs, buckets of pills of the prescribed type and extremely long queues into the gents ( actually  the 5 minute queue out was bigger than the queue in !). Yet even this presents no barrier to an army of men and ladies in their mid to late 50’s who literally storm a sold out Academy and party like it’s 1979.

Actually I’m one of them and this isn’t the first time I’ve ventured out for what has now become a regular fixture on any discerning punk fan’s annual calendar.  For me, The Stranglers really ended when High Cornwell departed (1990), but the lure of J J Burnel’s angry bass and Dave Greenfield’s enigmatic keyboard swirl is temptation indeed.  Jet Black even makes it on stage tonight for a few numbers, which I think is frankly amazing (he never made it the last time I encountered the band) and he is greeted with an almost overwhelming cascade of cheers and worshipping chants.

Regardless of my thoughts on the matter, The Stranglers current line up, with the very capable and talented Baz Warne,  is now 15 years long and readily accepted by their fans. The older (mid-career) material written under former singer Paul Roberts’ tenure is now firmly resigned to the past. But what a set list. Opening with Longships and The Raven (from the album of the same name), the Greenfield / Burnel engine room is an ever welcome and familiar trademark for any admirers of The Stranglers. Straighten Out and (Get A) Grip (On Yourself) are particularly powerful as we collectively time warp right on back to 1977.

The set touches quite well on Rattus Norvegicus and The Raven with more than a healthy dose of cuts from No More Heroes.  For alternative pop lovers, Golden Brown, Duchess, Skin Deep  and the ever popular Always The Sun prove that The Stranglers could write timeless sing-a-long classics that would continue to be loved by all.

For me though the highlight of a Stranglers night is always Down In The Sewer, which surfaced during the first of two encores. Eventually we begin to see out the night with Walk On By, a song the band superbly made their own, after which there’s one final trip back onto stage, to cap it all off with the rousing anthem that is No More Heroes.

It’s an impeccable night of inspiring,  rattling Stranglers tunes bathed in a sound as fresh as the day they were written. They are certainly a band so unique, that nothing comes that near even now.

Getting older has never been so much fun and long may we venture out to remember the past and celebrate what relatively little time we all have left…! Care homes circa 2035 : update your record collections and social room PA systems now!

All words by Jon Ashley . You can check out more work by Jon at his Louder Than War author’s archive, he also tweets as @MancMusicCoUk.