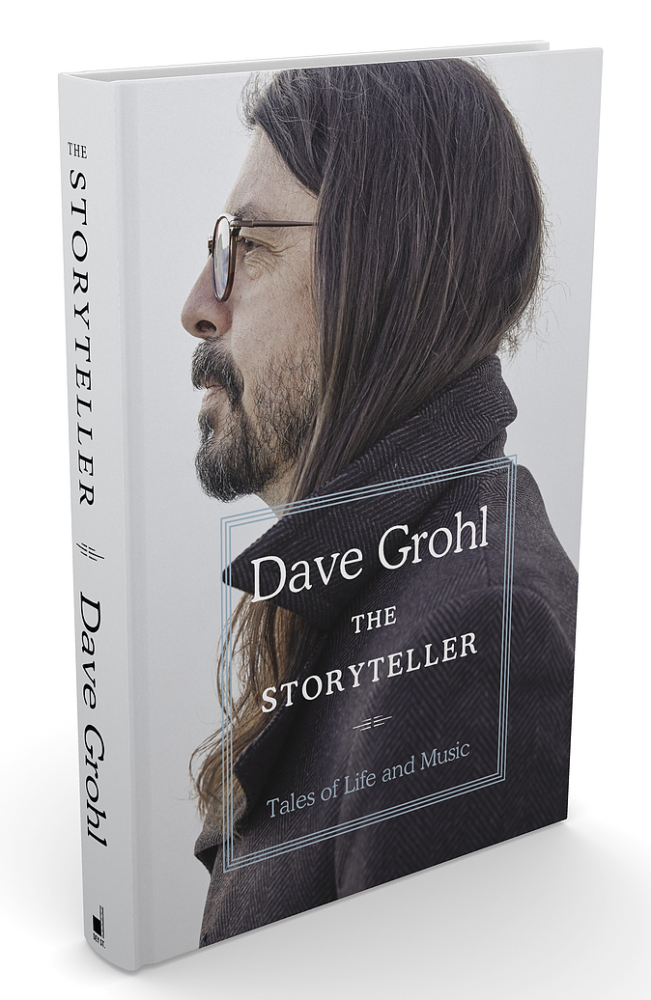 The Storyteller: Tales of Life and Music

“I will always be ‘that guy from Nirvana,’ and I am proud of it.” — Dave Grohl, The Storyteller

I should tell you that I’m writing this review after hearing the author do some in-person storytelling at one of the limited live events last month connected to this book’s release. At The Storyteller Live! In NYC, I laughed as the Foo Fighters frontman recalled encounters with Iggy Pop, sleeping on Kurt Cobain’s couch in Seattle, and drinking way too much coffee. That same intimate voice comes through in his memoir.

More a series of vignettes than chapters, the memoir introduces readers to various moments in Grohl’s life, from teaching his daughter to be a drummer to getting thrown in jail in Australia to nearly getting killed after a Nirvana show in Texas. Some of the material flows in chronological order, but some of the transitions are a product of memory and stream of consciousness. In nearly every vignette, Grohl links various moments in his life, such as having his head “split open like an overripe pumpkin long after the trick-or-treaters have gone home” as a kid to falling off the stage at a Foo Fighters gig in Sweden and breaking his leg. In both cases, it seems, his commentary is relevant: “I’m in so much fucking trouble right now.”

Grohl uses the many of the vignette titles to link his own personal narrative to music history. Text like TRACEY IS A PUNK ROCKER reminds the reader, naturally, of the Ramones’ Sheena is a Punk Rocker, while the section in which he meets “IGGY FUCKING POP!” is entitled SURE, I WANNA BE YOUR DOG!

Speaking of Iggy Pop, the memoir also invites the reader into an intimate and casual conversation with Grohl because of the way he reminds us that he’s just as taken with rock stars, film sets, political activists, and music venues as the rest of us. Not only is he out of his mind when he meets Iggy, but he can’t believe Tom Petty asks him to play drums on Saturday Night Live, worries that Madeleine Albright will think he’s a “moron,” and recognizes Santa Cruz because he’s watched “Corey Haim’s vampire masterpiece The Lost Boys” as many times as I have. His description of being inside CBGB in 1986 for the first time is one of the most charming descriptions in The Storyteller:

“This was punk rock ground zero, the epicenter of the soundtrack of my youth, and I would soon be standing on that stage myself, playing my heart out for the ghosts of those who had paved the way for young punks like me. The Ramones, the Cramps, Talking Heads, Television, Patti Smith, Bad Brains—this was hallowed ground, and it was my life’s greatest achievement that I had even made it this far.”

The visual elements of The Storyteller also turn it into a distinctive scrapbook, with reproduced photographs and ephemera from the musician’s life. There are full-page photos, report cards, and tours schedules. Yet it’s really the typeface at occasional moments in the text that stands out for me as so arrestive: Dave occasionally interjects in his own narration with a phrase or a sentence in all-caps, in a typeface that looks like handwriting. That “handwriting” is part of what makes the memoir so intimate. While Grohl’s narrative style and tone are conversational, he speaks directly to the reader in these textual moments, letting us in on some of his thought processes and reflections.

And well, reader, I think this is truly a typeface based on the rock star’s penmanship. Given that some of the ephemera reproduced for The Storyteller includes postcards Dave mailed home while on the road, we can see how that computer-printed font mirrors the handwritten ink. Genius. It turns the memoir into an analogue work of sorts while mirroring the warmth in Grohl’s writing voice on the page.

Fans of Nirvana and Foo Fighters will also love the anecdotes throughout the book, like Dave’s recollections of filming the music video for Smells Like Teen Spirit:

“I credit this video for the tsunami that was soon to come. Inspired by Jonathan Kaplan’s 1979 film Over the Edge, starring Matt Dillon, the ‘Teen Spirit’ video was a dark portrait of youthful rebellion, shot with actual fans from a show that we’d played the night before at the Roxy in Hollywood. With director Samuel Bayer, Kurt envisioned a high school pep rally turned riot, burning down the gymnasium in a blissful mosh pit of disaffected teens, tattooed cheerleaders, and young punks, leaving their angst and frustration behind in a smouldering pile of rubble and ash. THIS WAS A SENTIMENT THAT WE ALL OBVIOUSLY CONNECTED TO—BUT WE COULD NOT PREDICT THAT AN ENTIRE GENERATION WOULD FEEL THE SAME.” (Those caps, reader, are printed in the Dave-Grohl-handwriting typeface in the book, just to make sure we’re on the same page.)

One of the things I loved best about reading The Storyteller, perhaps, was realizing that Dave Grohl is into so many different kinds of music, and he seems to adore them all equally at different times and places. He’s just as starstruck meeting AC/DC as seeing Little Richard at an airport as watching “Elton. Fucking. John.” walk out of a London boutique. Needless to say, I highly recommend ordering a copy of The Storyteller for yourself and buying a copy this holiday season for the music fan in your life.

For more of Dave Grohl’s stories, you buy The Storyteller: Tales of Life and Music from your favourite local bookshop and follow @davestruestories on Instagram.