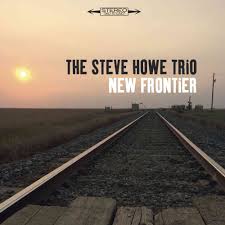 Steve Howe of Yes, not quite as solo as he has been in the past but opting for a slightly different direction. Yes,  it is what it says on the tin: a new frontier.

A New Frontier sees Howe returning to the trio format with son Dylan on drums and Ross Stanley on organ, in an outing he’s explored in the past. His live schedule with Yes and his solo career keep him inordinately busy to the extent that it’s been over a decade since he’s done something on record with a trio. The Haunted Melody of 2008 was the last artefact of Howe in trio format, although we can now add New Frontier to a catalogue that surely is one of the most varied and thorough of any modern rock guitarist. You don’t see the likes of Clapton and Page seeking the sort of outlet that Howe has continued to do across six decades.

It feels like a nod to new age-y meanderings that set things up with Hiatus where Howe decorates the shuffling rhythm and organ stabs with his usual fluency. Inevitably, there is a tendency to look for little runs or passages that might have been at home on a Yes record. The lengthier Left To Chance contains what could easily have been a guitar figure that might have suited Yes making a reappearance until a jazzy mood emerges. However, flitting between a combination of styles shouldn’t be surprising as it has always been Howe’s strength and the key feature of his contributions to the pioneering work he did in the Seventies before going more A/MOR with Asia.

Son Dylan has shown he can lay down a solid beat for Wilko Johnson and again keeps his rhythms and accompaniment simple, as the organ lines that I inevitably associate with that grand old Nicholas Parsons landmark TV show, Sale Of The Century, crop up frequently. In Zodiac, the thoughts shift from this week’s instant sale to Keith Emerson before the trio go cabaret jazz. It might be a challenge for some of us as Howe takes his followers on a circuitous path that winds and crosses familiar territory, and there are occasions when you feel you’re on the same wavelength before the organ interjects and shimmies across.

What does come across strongly is the motivation to keep playing, keep things interesting and, let’s face it, Steve Howe has nothing to prove. Even though it’s an acquired taste, New Frontier finds him doing what he enjoys and what he does best.