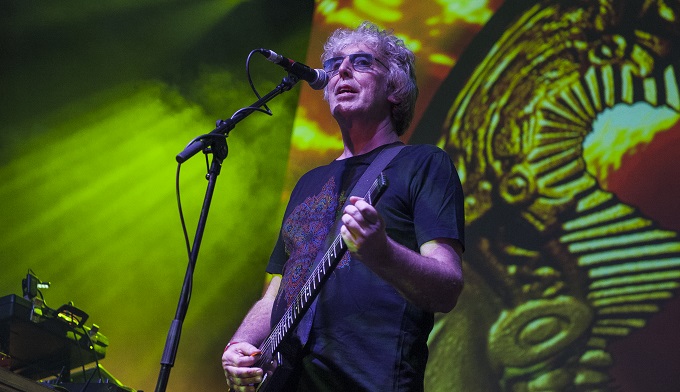 A grand night of nostalgia as some of us tripping  (in more ways than one)  back down memory lane to hear Steve Hillage and the Gong gang playing music from his revered Seventies albums, L, Green, Fish Rising and Motivation Radio.

Being a major city, there was plenty of competition (or not) in town with Noel Gallagher n Heaton Park setting up the Parklife weekend. Perhaps not an alternative many of those heading for the Ritz would have considered, especially with the added bonus of possibly catching the spectacle of the naked bike riders streaming down Oxford Road around the time that doors were opening.  However, instead of wallowing in the mud that surely would have been part and parcel of the Parklife experience, we were off to do some wallowing of a different kind. 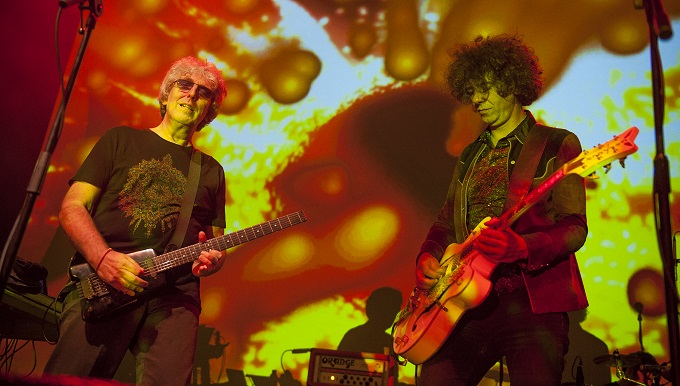 Meanwhile…back in 2013, Steve Hillage was the recipient of the ‘Visionary’  award from PROG magazine. Now, whether or not the term takes into account any form of nostalgic looking back which this tour most certainly does, there’s no denying his visionary pedigree and you can’t possibly quibble over the fact that an absolutely rammed Ritz was happy to look back with Steve.  An introductory set from the pairing of Grahams Massey and Clark might have puzzled a few people. On the one hand, it may have puzzled the unenlightened and uninitiated for whom it may have appeared as two blokes making some musical noise with an array of instruments from violin to guitar to wind and keyboards, all held together with some electronics and beats. Those more in the know would tell of experimental happenings and improvisations of quality in their fifty-minute set.

Even at this stage, the Ritz was absolutely rammed, extremely hot and a testament to the fact that Hillage is still highly regarded and a hot ticket of a concert draw. So much so that the three dates, of which Manchester was a part, have been swiftly (and thankfully) added to later in the year when the current incarnation of Gong will be playing their own set instead of joining Hillage’s partner  Miquette Giraudy in backing our unlikely hero. 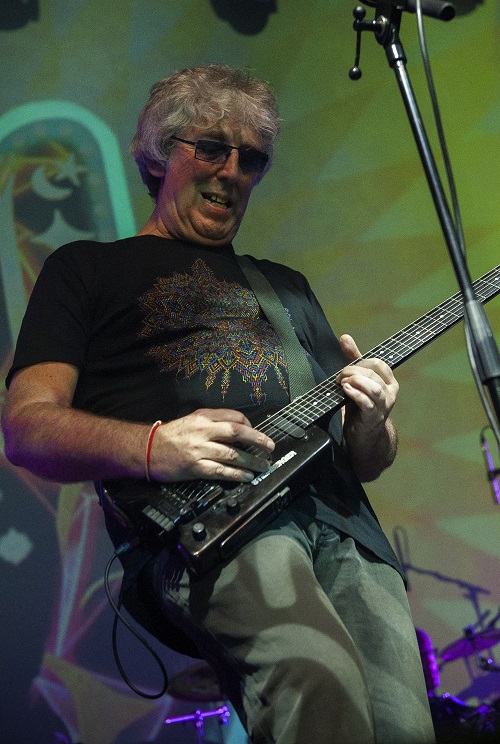 It may have been a three guitar line up , but with Fabio Golfetti adding some striking glissando guitar embellishments and Ian East (described by Torabi as the factor that adds the ingredient that makes the band sound like Gong) almost forgotten in the wings, you couldn’t deny that this was a line up that was going to do justice to the legacy. Kavus Torabi, in particular, is a perfect foil for Hillage with his big white expensive guitar and with such an appreciation and knowledge of the music, that he’s probably more Hillage than Hillage himself.

A lengthy intro tape of some celestial sounds gave way the six-piece to the grooving immediately on Talking To The Sun with the projections beginning their constant evolution of swirling cosmic backdrops to induce a psychedelic ambience. The sheer joy as they riffed out on George Harrison’s It’s All Too Much and we were in glorious abandon and the almost expected progression through Salmon Song and the combo of the Lunar Musick and Solar Music Suites. There may well have been a number of veterans of Deeply Vale in attendance who will have been closing their eyes and just imagining that archetypal Hillage image of Jesus hairstyle and beard with the flared sleeves although, like me, there may be some who still can’t quite get used to the sight of the Steinberger guitar.

The toes in the water test by a rejuvenated Hillage and Gong might well see them being acclaimed in some circles as a second coming.  Whatever – Manchester was indeed a  revelation. Unashamed nostalgia on a sensational scale. They’re ready to take the plunge and November can’t come soon enough.