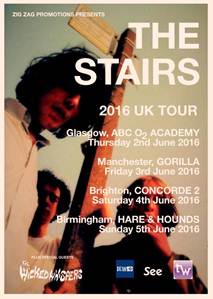 The Stairs are the great lost band of Liverpool. Somehow they never connected with the mainstream with their stunning music. But, thankfully, they have returnedto continue their comeback… 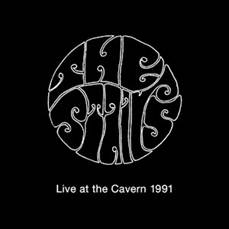 Formed in 1989 drummer Paul MaGuire explains ‘Ed (bassist Edgar Jones) had a few tunes he had written including ‘Weed Bus’, which we jammed and me and him started there. Ed knew Ged (Guitarist Ged Lynn) who was on the same music scheme so we roped him in. We skinned up and we got it together. We had our own night every Friday in the Cosmos club where we played a set of covers, then we’d DJ, then we would play our numbers.’ 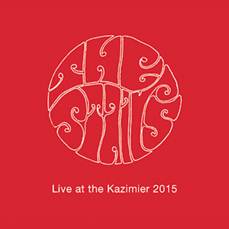 They released little, apart from a few singles, one of these being the unforgettable cult classic: ‘Weed Bus’- and their celebrated psyched up, debut LP  released both released  on Go!Discs ‘Mexican R’n’B’. (a triumph of the soul!) Edgar explains further ‘Our A&R man at Go!Discs  initially was Carl Smyth (Chas Smash from Madness). We were his first signing and he was very accommodating and enthusiastic.’

A heady mixture of Psychedelia, Motown, Garage Rock ‘n’ Soul, R ‘n’ B comeback of The Stairs confirms their credentials- not just in the great canon of Liverpool bands but also as an essential part of British

Underground Rock, Paul explains ‘I’m very proud to be involved with The Stairs. I think Edgar is a genius. His songs plus Edgar and Ged’s playing were so fucking cool. We were recording material at a time most of the world was getting into acid house. We wanted to give the general public something else to listen to. Get them on the ‘Weed Bus’ so to speak.’

In 2015 current Liverpool psychedelic band The Wicked Whispers invited The Stairs (with multi-instrumentalist Austin Murphy) to play at their 3rd annual ‘The Butterflys Ball and Grasshoppers Feast’ event held at The Kazimier in Liverpool. The sell-out event marked The Stairs triumphant return as they showcased familiar and brand new material, wowing the 500 capacity crowd. Edgar: ‘The gig was absolutely smashing! We’d all kept in touch but our paths only ever brought us together sporadically but usually only two of us in same room at same time. The first rehearsal was great when we kicked into ‘Mary Jo’ it was more like we’d had two weeks off rather than 20+ years. It was great to see the two tiers in our fan base that night: those who were older and were coming back to see us again and the young uns who were there to witness the legend that got created by word of mouth in the past 20 years. The crowd reaction was fantastic; I don’t think either tier felt let down.’

Such was the buzz around the Kazimier show it prompted The Stairs to make a headline appearance at Le Beat Bespoke, London, in March and to then announce a 4 date UK tour which starts on June 2nd 2016 at Glasgow O2 then the tour continues on to Manchester Gorlla 3rd June, Brighton Concorde 4th June and finally Birmingham Hare & Hound 5th June, Paul: ‘With the amount of toss that goes by the name of music nowadays, I think you need the Stairs in your life.’

Just prior to the Kazimier show the band released: ‘The Great Lemonade Machine in the Sky’, on Viper Recordings, a collection of previously unreleased recordings all thought to be lost but recently rediscovered in a relative’s attic! A single entitled ‘Shit Town’ was also released on 7” on Eighties Vinyl Records in the same month. Post the Kazimier gig The Stairs have released 2 live albums, The Stairs live at the Cavern 1992’ which captures The Stairs at their youthful best playing a mixture of their own material plus covers by the like of The Yardbirds and The Hunters, plus recent release ‘The Stairs live at the Kazimier 2015’, both released on The Viper Label

The Stairs releases available via https://www.the-viper-label.co.uk/