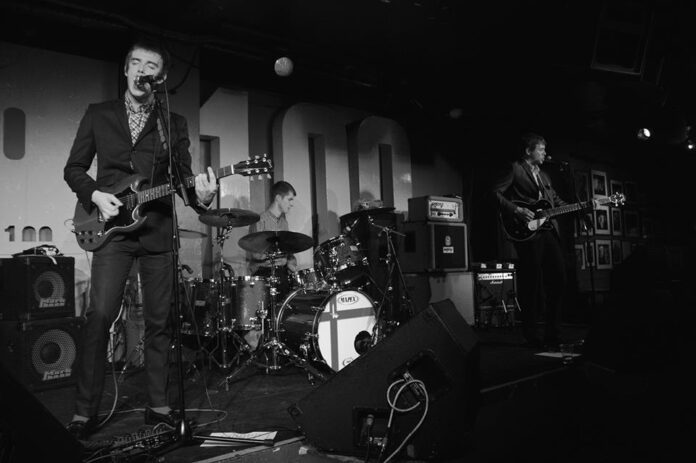 The Spitfires are back, bigger and bolder than ever, with their latest new single, ‘I’m Holdin On’ b/w ‘Relapse’. It’s been a colourful journey, not to mention plenty of hard work, for the Watford 3 piece mod band since they first appeared in Louder Than War back in 2012 with debut single ‘Spark To Start’. Louder Than War’s Carl Stanley recently hooked up with the band’s singer songwriter, Billy Sullivan, who looks back at the band’s career, new influences, the state of music today and why the new single is his best piece of writing yet.

Louder Than War: Your new single sounds like the biggest and most complete sound the band have produced yet, are you all really pleased with the new single?

Billy Sullivan: Yes, we’re incredibly pleased with it. It’s by far the best thing we have ever recorded and from the moment we stepped into the studio we all had a buzz as we knew whatever we were creating – it was gonna be good.

Last time you spoke to Louder Than War was for the release of ‘Spark to Start’, would you say the band’s come on quite a lot in the short time between then and now as you’ve had more time playing live, rehearsing and writing? Do you feel there’s been a progression in the band’s sound and playing since Spark to Start?

I think there has definitely been a progression. ‘Spark To Start’ was recorded 3 weeks after the band got together and since then we have all gelled as musicians and as mates too. The sound of the band and of the songs I have been writing has also developed into something a little bit darker, a little bit nastier, but definitely bigger. And I think this new single really shows that.

How about new influences, what’s been inspiring you to write and play over the last year?

Over the last year I’ve been listening to a lot more soul music, The Smiths, the new Arctic Monkeys record, Graham Coxon, The Who, a bit of Wire and Gang Of Four and also stuff like The Kinks and The Shangri-Las. But in general things have just got a bit more darker in terms of writing. Quite deep lyrics about teenage mentality and paranoia with an intense backing track.

So what’s the idea behind ‘I’m Holdin’ On’ / ‘Relapse’ in terms of writing and lyrics? (What you’re saying?)

The lyrics were based on paranoia and feelings of not fitting in, being very alone. Which I think everyone experiences at one point growing up.

The original idea for ‘I’m Holdin’ On’ was like a nod to northern soul. But it sort of took on a life of its own once it was finished. The home demos were slow and just an electric guitar and had a real feeling of emptiness and longing for something better. But when I took it to the band the energy took it to another level. The feelings were the same, but angrier.

Would you say The Spitfires are quite politically aware for a young band? It’s hard to not have a point of view at the moment as the times are definitely getting harder, do you think the band reflects those feelings in their music?

I definitely think so. It would be impossible for me to write about the world and people around me and not pick up on that fact.

We all have to work as well as do this – we all have shitty normal jobs that we can’t stand, but we’re the lucky ones. We have that escape with the band whereas most people don’t. Most people are just living for Friday and Saturday night where they can go out, spend their money and forget that Monday morning it goes back to normal. Or we just look at our mates who are scared into staying in education for as long as possible cos they’re told they won’t get a job without a degree. Yet most people come back from university and can’t get a job at all anyway!

I wouldn’t bother writing if I didn’t think the songs meant something or explored something different that people may be able to relate to. 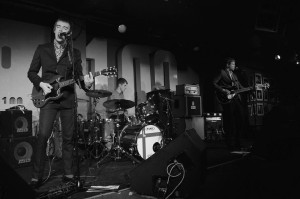 Not much for the kids these days either, the youth clubs of the 70s / 80s were great breeding grounds for what came – the internet is everything now! But to be fair, mainstream music is pretty safe and boring these days anyway, what do you think?

One of the main problems we find is young people not being able to get into gigs. Anyone under the age of 18 now has to think about spending anywhere up to a tenner on the door, (if in London) nearly a fiver a drink and then they have to worry about getting I.D. to show they’re over age. Yet everyone moans that it’s the X Factor’s fault. The industry have to bring kids back into it, make ’em feel that music is theirs again and not just a nostalgia trip through their parent’s record collections or some tinny sound that comes through their laptop or smart phone speakers.

We see it firsthand because we are the generation everyone talks about – the so-called Facebook / X Factor generation. There are young people getting into again, but it needs to be made more accessible.

The Spitfires have also been involved in a recent advertising campaign for the re-launch of the bespoke classic Baracuta Harrington Jacket and also for Dr. Martins … was is fun to be a part of them? How did they go? 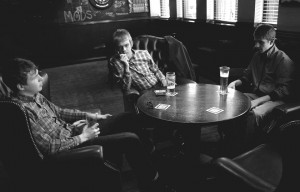 Both were great to be involved with. Clothes are a massive part of it for us and both brands are what we are into and wear anyway. As individuals we are Mods, but it’s not a band genre or whatever. It’s been diluted to a sort of parody for ‘Britishness’, but for us it’s a way of thinking. It’s our roots. There’s a lack of identity or individualism in young people at the moment. But more and more 16 year olds put their Ben Sherman on, get their haircut and say to their mates ‘Yeah I’m a mod, so what?’ It’s almost like the attitude of Punk bubbling up again, but taking on a new life, a new updated vision.

‘I’m Holdin’ On’ / ‘Relapse’ is out on Cooking Soup (a new label who the band recently signed too), on March 3rd. Will it be released on all formats and where can we get it?

The single is being released digitally, on CD and also as a limited 7″ vinyl. It’s available to pre order at the moment from cookingsoup.bigcartel.com.

…and can we catch The Spitfires live soon, will you be playing shows in support of the single release, and have you any tours or festivals gigs lined for the summer?

We head off on Tour at the end of February with dates all over the country and also our first european date. All gigs will be listed on thespitfires.org.