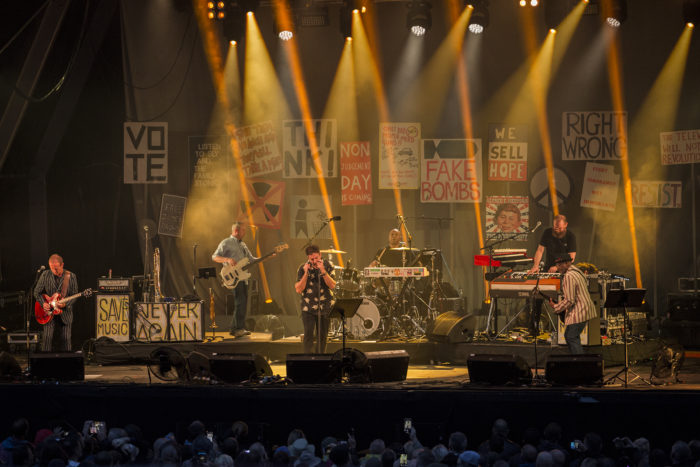 The original Two-Toners skank it up in Bristol supported by the hometown’s post-punk mavericks. Elfyn Griffith gets wet, Michael Brumby takes the photos.

Biblical rain greets the crowd for the opening set of this evening as the screeching distorted funk attack of The Pop Group blasts the raincoated huddles. Or at least half of The Pop Group as we know them. Mark Stewart hams up the West Country vibe to his hometown Bristol crowd in between delivering the coruscating vocals to such classics as We Are All Prostitutes, Thief Of Fire and Citizen Zombie while Gareth Sager chugs out the funk on guitar and twisted sax breaks. No sign of drummer Bruce Smith or bassist Dan Catsis, augmented here by two younger musicians.

The rain eases but still comes down by the time The Specials take the stage to a Michael Nyman score and wailing sirens, and an impressive backdrop of political signs. Terry Hall is the last to stroll on, chuggin’ on a vape and as dour-faced as ever. Man At C&A, Rat Race and the gentle ska of Vote For Me off their new album, this year’s chart-topping Encore, are the openers, before Hall lets out a barbed blast at just about everyone in our warped political arena.

Hall, bassist Horace Panter (or Sir Horace Gentleman) and guitarist/vocalist Lynval Golding are the three originals left in The Specials for this 40th anniversary tour, but the younger line-up around them still evoke that old Two-Tone feel albeit without so much of the intensity maybe of old. 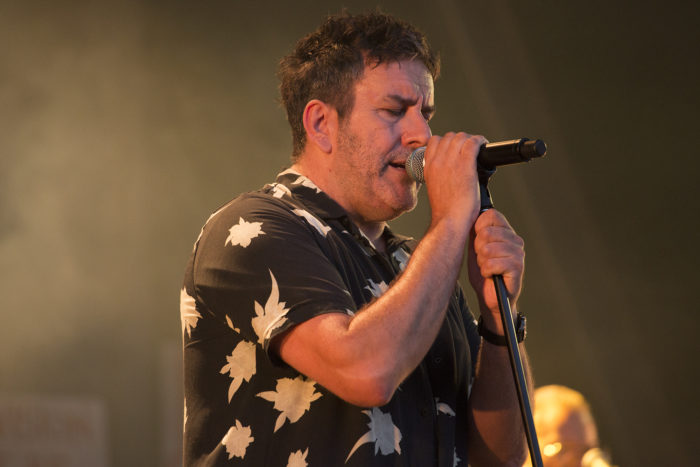 Tonight it’s a run through their memorable back catalogue with several from Encore in the mix, the political message in the music as relevant now as it was when they formed back in Thatchers dark days. The Lunatics Have Taken Over The Asylum is especially poignant and sickeningly true. Blam Blam Fever highlights modern day gun and knife crime vividly.

The mariachi trumpet of Steroptype after a lively Message To You Rudy, heralds the presence of Saffiya Khan on stage to sing 10 Commandments. The activist and model, and honorary Special, whose image facing down a member of the far-right EDL two years ago went viral, climbs down and cruises through the crowd still singing.

After that its a sprint to the end with Nite Klub, Do the Dog, Concrete Jungle – the effervescent Lynval Golding shadow boxing other band members – a spirited Monkey Man and a great Gangsters, the introductory seagull noises probably confusing our own Bristol peckers down here at Harbourside… 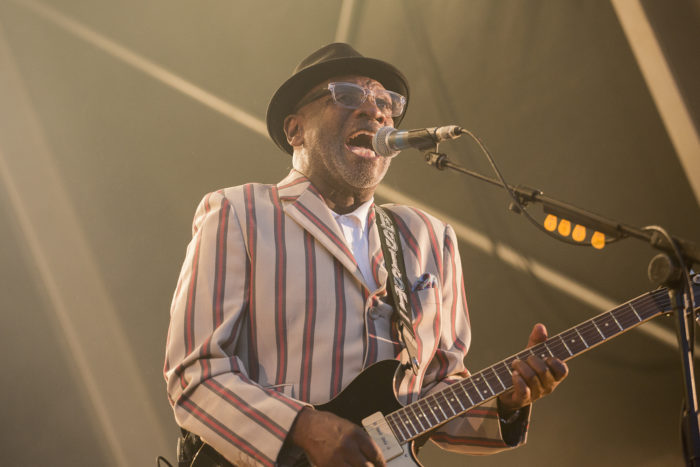 Too Much Too Young ends the set and they give two encores, as is the norm on this tour: We Sell Hope, a haunting Ghost Town and a lovely Wondering Now with Khan back on to share the vocals with Hall.

We’re damp, but steaming with a sense of shared purpose. Good to see old friends still keeping it relevant…