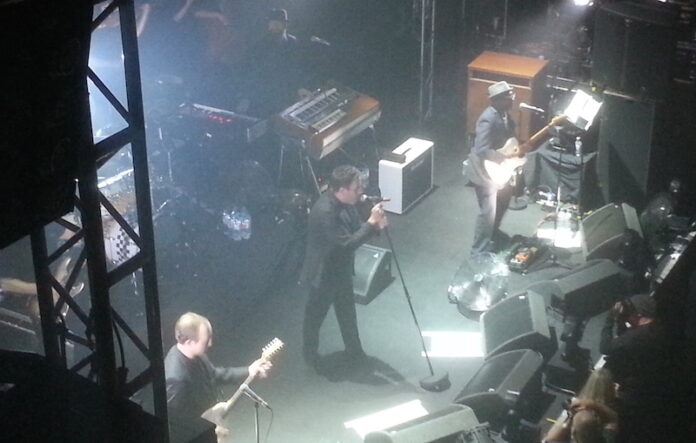 Soul Boys, Skins, Mods, Rude Boys and Punks gather in Leeds to witness The Specials as Andy Santiago nudges towards the end of his bucket list.

Driving home from work a few weeks ago, my attention was wandering and I started to muse upon a near lifetime of musical obsession. Where did it all start? What was the gateway song and who were the band responsible? After much pondering, I had a grand recollection and all the pieces fell into place. As a ten year old boy in 1981, I remembered hassling my parents to cut short a Sunday visit to the grandparents so I could be back home with enough time to turn on the radio at about 6.50pm. the reason for this was to hear the final song of the top 40 countdown on Radio 1. Occupying the number one slot at that time was a song called ‘Ghost Town’ and the band responsible were The Specials. That was my awakening to the absolute power that music has over me and all the joys it can bring. ‘Joy’ and ‘Ghost Town’ are not usually to be found in the same sentence but regardless of the subject material contained within the song, the 10 year old me dug the shit out of it and from that point, I was a genuine music lover.

So, it seems apt that a mere 33 years later, I found myself setting off to Leeds considerably later than planned, with a soundtrack consisting of the full version of ‘Weekender’ by Flowered Up at tinnitus-inducing volume to finally see the band that literally changed the course my life for the very first time.

I’m not going to pretend to be a massive fanboy of The Specials, apart from the perfunctory ‘Greatest Hits’ CD, I have none of their other work in my collection and so won’t be intellectualising or placing any deep analysis on the gig. I’ll simply tell it as it was and relate how it went down.

A cold and miserable Monday night in Leeds had no negative effect on the turn out and as we entered the venue it was clear the attendance was bordering on a sell out. I was expecting a diverse crowd and that’s exactly what it was. Soul Boys, Skins, Mods, Rude Boys, a smattering of Punks and even a couple of Metalheads were all nodding to the Ska tunes that were playing through the P.A. 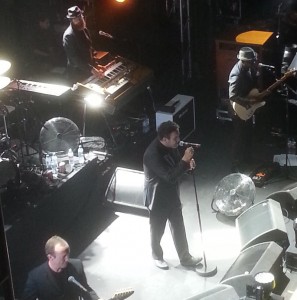 Eventually the house lights dropped, The Specials took the stage and I was about to cross off another ‘Bucket List’ band. The familiar haunting intro and shuffling uneasiness of ‘Ghost Town’ was greeted with a deafening roar from the Leeds crowd.

It seemed like an unusual choice of opening track but the grin on my face said it all. ‘Friday Night, Saturday Morning’ was up next and seemed to fall a little flat. In fact, I would go as far as to say the first 15-20 minutes were a little disappointing. The band seemingly not to be really firing and lacking any visible onstage chemistry. Terry Hall was his usual dour self, recently recruited guitarist Steve Cradock on loan from horrific dadrockers Ocean Colour Scene contributed nothing in the way of personality and it looked like it was going to be down to rhythm legend Lynval Golding to provide the visual focus as he covered all areas of the stage, laying down some superb guitar licks and generally riling up the crowd.

I was concerned, the gig looked like it was going to be a bit of a non-event and then almost immediately the mood onstage seemed to change with the arrival of ‘Hey Little Rich Girl’ and the crowd reaction reflected this. The classic ‘Rat Race’ put any doubts to bed and it was clear that after a bit of a dodgy start, The Specials were going to play an absolute blinder. I doubt there was a single person in the room who wasn’t wearing a massive grin and skanking like a maniac.

The mood took a more serious tone with a bit of a speech on racism from Lynval before the duo of ‘Why?’ and ‘Doesn’t Make it Alright’. It’s hard to believe songs like this need to be played in this day and age but the recent increases in racial intolerance and hatred make them as essential as they were the day theses songs were written.

‘Nite Klub’ restored the celebratory mood and a few hundred pints were raised with the roar “And the beer tastes just like PISS!” right on cue from the Leeds crowd. By now the band were flying and the room was absolutely bouncing. The colossal skinhead next to me fixes me with a grin that was in proportion to his immense size and before I can react, he grabs me and wraps his tree trunk arms around me in a massive bear hug whilst screaming “Fuckin’ love it Mate!” down my ear! Never had an experience like that before at a gig!

‘Do the Dog’ maintains the momentum and the chants of “Rude Boy, Rude Boy” from the crowd heralds the arrival of the Ska classic ‘Monkey Man’. If possible the levels of energy rise even further. What started a bit subdued is now rapidly heading towards something off the fucking scale and it just keeps getting better. I can’t believe I had any doubts at the start of the gig.

‘Concrete Jungle’ and another little speech from Lynval and we’re into ‘A Message to you Rudy’ with it’s irresistible brass driven swagger, the whole room singing along. The night is drawing to an end and ‘Rich Bitch’ leads into the inevitable ‘Too Much, Too Young’. A truly climactic and rousing way to end the main set. The noise as the band say goodnight and leave the stage is deafening and soon they return for a three song encore, kicking off with ‘Guns of Navarone’, the crowd singing along to the brass riff. More audience mayhem follows with a rowdy run through ‘Enjoy Yourself’ and then the final song of the night slows things down a little with ‘You’re Wondering Now’. A euphoric Leeds crowd once again tear the roof off and Terry Hall displays the first positive sighting of a smile on his face as the band leave the stage for the last time.

As we spilled out on to the freezing streets of Leeds there was literally steam rising off the sea of people as they went their separate ways, massive smiles on every face and even some teary eyes. The sense of community was quite overwhelming and that was indeed a gig that displayed everything that the power of music can do.

The Specials were quite simply phenomenal on that Monday night in Leeds, even if you just have a fleeting interest in the band and the opportunity to see them live arises, take it or be forever regretful.

Many thanks to Tom and Gillian at Hall or Nothing and to Padge for the pictures.