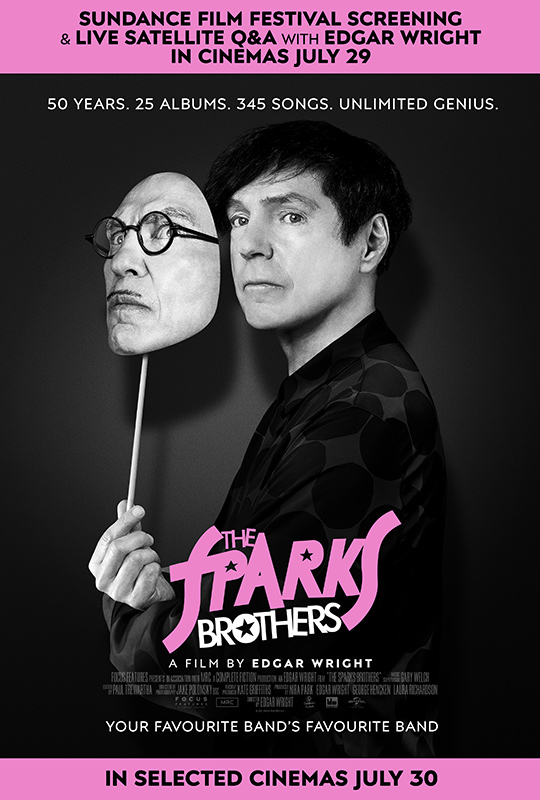 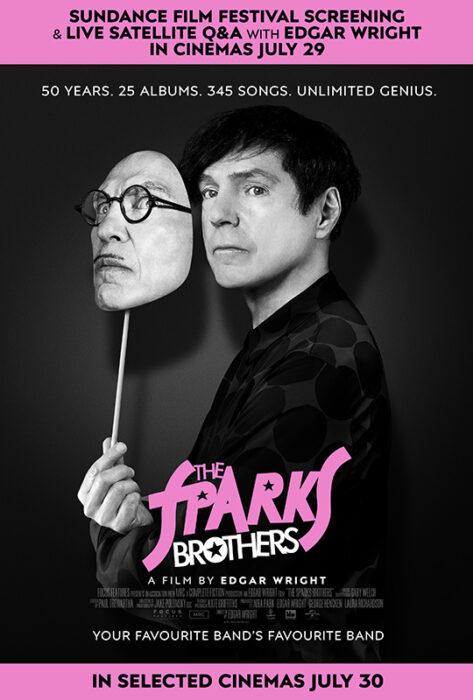 Do you listen to Sparks? With its radiant combination of animation and archival footage, Edgar Wright’s new documentary asks, what have you been doing if you don’t?

Making a film about Sparks — the musical duo of Ron and Russell Mael — is surely the most fitting way to tell the story of a band whose origins arose through the “prism of cinema.” The Sparks Brothers documentary introduces viewers to the Maels in their native Southern California, a place epitomised for so many by Hollywood.

Ron and Russell love movies, and in some ways, the brothers are almost like imaginary creations plucked from a cinematic sensation. Indeed, they’ve been described as “otherworldly.” And Ron’s (in)famous mustache from the band’s early years is like meta filmic accoutrement, referencing both Charlie Chaplin’s character of the Tramp in silent cinema (long before the rise of Adolf Hitler) and Chaplin’s portrayal of Adenoid Hynkel in his World War II-era serious parody of Nazi Germany in The Great Dictator (1940). By the 1970s, it’s difficult, if not impossible, to disentangle that mustache from its forever-intertwined political and cinematic referents, and Ron seems to be poking fun at the disparate and dangerous ways in which one might achieve fame. At the same time, maybe he just finds the mustache fashionable, completely untethered from its visual past. You just never know. And that kind of paradox is part of what makes Sparks so enchanting, bewildering, strange, and sometimes grotesque — all at the same time.

The documentary follows a temporal trajectory, beginning with the Maels’ early years and moving through each album in consecutive order. Even if you don’t know a single thing about Sparks, Wright’s documentary is accessible to anyone who has ever bought a movie theatre ticket or watched an episode of VH1’s Behind the Music. It relies on interviews, archival footage, and animation to construct the narrative. By the end of the film, I suspect you’ll become a fan like the dozens of musicians, actors, comedians, and writers who appear in the footage. Stephen Morris and Gillian Gilbert are Sparks fans? You should be, too! Björk listens to Sparks? Why aren’t you? The running time is on the longer side, but let me remind you that the band has recorded 25 studio albums and hundreds of songs over a fifty-year career in music. So perhaps within that framework, the documentary length seems almost scant. Give us more Sparks!

While The Sparks Brothers is informative and provides what the documentary promises as a “long overdue portrait of them [the Mael brothers] as artists,” it’s also much more. With their sardonic wit, Ron and Russell produce some laugh-out-loud moments when they make comments like, “being a British band was a lifetime dream of ours.” The film is also smart in its play with visual technology and nostalgia, recreating a scene of the Maels surfing “in the past” with one of the ubiquitous vintage filters designed for twenty-first century digital devices. Ron and Russell are at once tied to particular moments in time through the release of each album and their subsequent cultural impact, but they’re also timeless.

Considering the ways in which particular Sparks songs are linked to the Maels’ interest in cinema, the one thing this documentary seems to be missing, at least for anyone thinking about the connections between Sparks and the movies, is reference to the director Martha Coolidge or her film Valley Girl (1983). Multiple Sparks songs are integral to the narrative (e.g., Angst in My Pants and Eaten By the Monster of Love) and contribute to one of the most-loved soundtracks of the early 1980s. Indeed, Valley Girl brought together and introduced moviegoers to Sparks, The Plimsouls, Bonnie Hayes, Payola, Josie Cotton, The Psychedelic Furs, Modern English, and more. My heart broke a little to realize the films Rollercoaster (1977) and Rad (1986) — soundtracks to which Sparks contributed songs — got mentions, along with references to French filmmakers Jean-Luc Godard and Jacques Tati, while Martha Coolidge was saliently absent.

Circling back to the cinematic qualities of Sparks, the stop-motion and collage animation in the documentary is out-of-this-world good, particularly in its ability to capture something about the fictive qualities of the Maels. Without the animated segments, the film simply wouldn’t be the distinctive visual work that it is, so can we take a quick moment to applaud all the animators and makers involved in these bits of the documentary? Anita Bruvere, Gemma Byrne, George Carman, Timon Dowdeswell, Sam Gainsborough, Quentin Haberham, Martyna Koleniec, Thomas Matthew, Greg McLeod, Arnau Gòdia Monetsinos, Jake Teale, and Becky Watson (whew—I hope that’s everyone!). Speaking of animation, let me highlight the brief segments of John Lennon (voiced by Simon Pegg) and Ringo Starr (voiced by Nick Frost) in conversation, which bring sheer delight and remind us of the incredible comedic films Wright has made with these two actors in the past. (I hope you know the movies to which I’m referring, but dear reader, if not, make a plan to see Shaun of the Dead (2004), Hot Fuzz (2007), and The World’s End (2013) just as soon as you can.)

The Sparks Brothers gloriously displays Wright’s admiration for the Maels, and it’s obvious that the documentary was a true labor of love. Like the best movies, there’s also a dazzling soundtrack to accompany it. Get yourself to a cinema and revel in the wonder that is the band Sparks.