Home Music The So So Glos: Blowout – album review 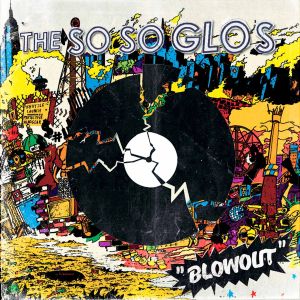 Brooklyn’s lifelong punk rock band of brothers The So So Glos return with UK record release for their explosively enjoyable third album Blowout.

Earlier I wrote about Brooklyn’s Japanther, and The So So Glos are just as much of a mainstay of the scene and inspirational pride of the city. The band co-owns the great all ages DIY space Shea Stadium, and it’s clear they know a thing or two about establishing a community and nurturing important familial bonds through their various musical enterprises.

If you’ve outgrown Green Day’s processed punk (or have always found it completely vapid, insincere and uninteresting like me) but still crave that energizing pop punk oompf, then The So So Glos could just be what the doctor ordered. While structurally Blowout has much in common with 70s punk, there is a spotless clarity and accessibility to it which makes it ripe for radio airplay. Sometimes I tune out when things are too easily digestible, but in this instance, the album just seems uniquely loud and uninhibited rather than blandly sanitized and soullessly packaged.

Blowout blasts off with Son of an American, a jittery, caffeinated ode to nostalgic national pastimes such as baseball games and liquor malt ice cream. Like the rest of the album, it is jam-packed with more hooks than an Ichi the Killer outtake, and the performances crackle with a refreshing spiritedness that makes their formula pretty difficult to resist. While there is nothing that particularly sags on the album, Blowout really kicks off with Diss Town, which is classic singalong punk and sounds like a modern day Sham 69 with its old-school football terrace style chant. All things considered, the mantra of The So So Glos might as well be “If the Kids Are United”. Lost Weekend could be even better, and maintains the previously established adrenaline high with its spry riffs and anthemic earnestness.

One of the secrets to the band’s appeal, beyond the supreme catchiness and tightness of the songwriting, is probably the charismatic voice of frontman and bassist Alex Levine, which is both gritty and melodic in a way that is completely convincing; The So So Glos actually sound like the hard-working, gleeful champions of creative freedom and artistic positivity that they are. Xanax features jingling sleigh bells and a soothing “sha-la-la” lullaby to shrewdly juxtapose the song’s message about refusing to be dumbed down. The surf rock rave up of title track Blowout is one hell of a party, like the soundtrack to a tiki barbecue on Mars surrounded by all your best friends, while Wrecking Ball crashes in as promised by its name with a heavy bluster of distortion-soaked guitar licks and the deep fat drum thud of utter demolition. Speakeasy concerns the dehumanizing nature of our reliance on portable technology and has an iPhone zombie themed nightmare for its official video… The common thread linking all of Blowout’s tracks is their unrestrained liveliness and enthusiasm; each tune is an endorphin projectile aimed straight for the heart, quickening the pulse in a life-affirming rush of fun.

Uninventive plagiarism can be a shortcoming of a lot of these types of bands, but all of Blowout’s songs sound varied enough to be plainly distinct from one another, and since they are firmly rooted in the familiarity of my old punk favorites, perhaps this lends them a powerful, charming immediacy. The album certainly remains true to the punchy vitality and youthful exuberance of the era, and stirs up that nagging restless urge to just DO SOMETHING, even if it’s simply pogoing around your living room like a blissful idiot.

The So So Glos are on Facebook and Twitter, and the Shea Stadium website is also worth checking out as one of Brooklyn’s best DIY live venues and recording studios.