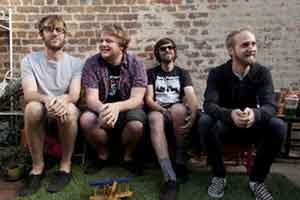 The Smith Street Band have returned to the UK, and rustle up yet another raucous show in Manchester. Kelly Johns joins the throng.

Everyone crammed into the charmingly grotty room upstairs at the Star And Garter for The Smith Street Band were in the palm of Will Wagner’s hands. The galloping drum beat of the sets opening track Postcodes (For People Who Will Not Arrest Me) has every foot stamping and everyone clapping along. The lyrics “I don’t want to work no more, I’m gonna make you so proud of me” are ricocheting around the room.

Although it was a surprisingly short set from the folk punk four piece, the band packed in tracks from their most recent release, the Don’t Fuck With Our Dreams EP (released last year), as well as earlier releases from the albums No One Gets Lost Anymore (2011) and Sunshine and Technology (2012).

Obviously feeling slightly jet lagged, the band was feeding from the crowd’s enthusiasm, helping them to maintain their gusto. The crowd varied in age and background. But in unison, everyone gets stuck in and enjoys a good bounce around. A few rather adventurous stage dives have the band smirking, before the lead singer finally joins them during the track Young Drunk, singing the chorus furiously.

The band have mentioned in previous interviews that were surprised to be so well received in the UK. However, with a hearty likeness to (I hate to say it) Frank Turner, with more charismatic Australian-ness and a slightly more entertaining approach, I’m surprised that The Smith Street Band don’t have a larger following on this side of the water.

The band had fantastic support from Brawlers, Astpai, Great Cynics, and perhaps a slightly out of place booking, yet still decent band, Restorations. Personally, I thought the sets felt too short and too many, and would prefer one less band and slightly longer sets – but that’s just me.

The Smith Street Band have toured in the UK a couple of times now, and word has certainly spread. This is a band worth going to see, and a band that we will no doubt be seeing much more of.

Bands mentioned in the review can also be found at the following sites – Brawlers, Astpai, Great Cynics, Restorations

All words by Kelly Johns. More of Kelly’s work for Louder Than War  can be found at her author’s archive.