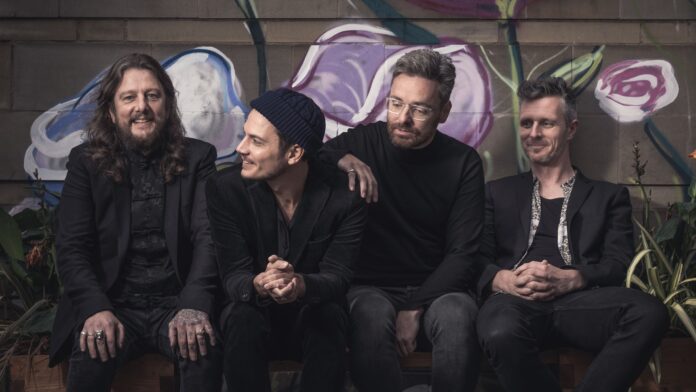 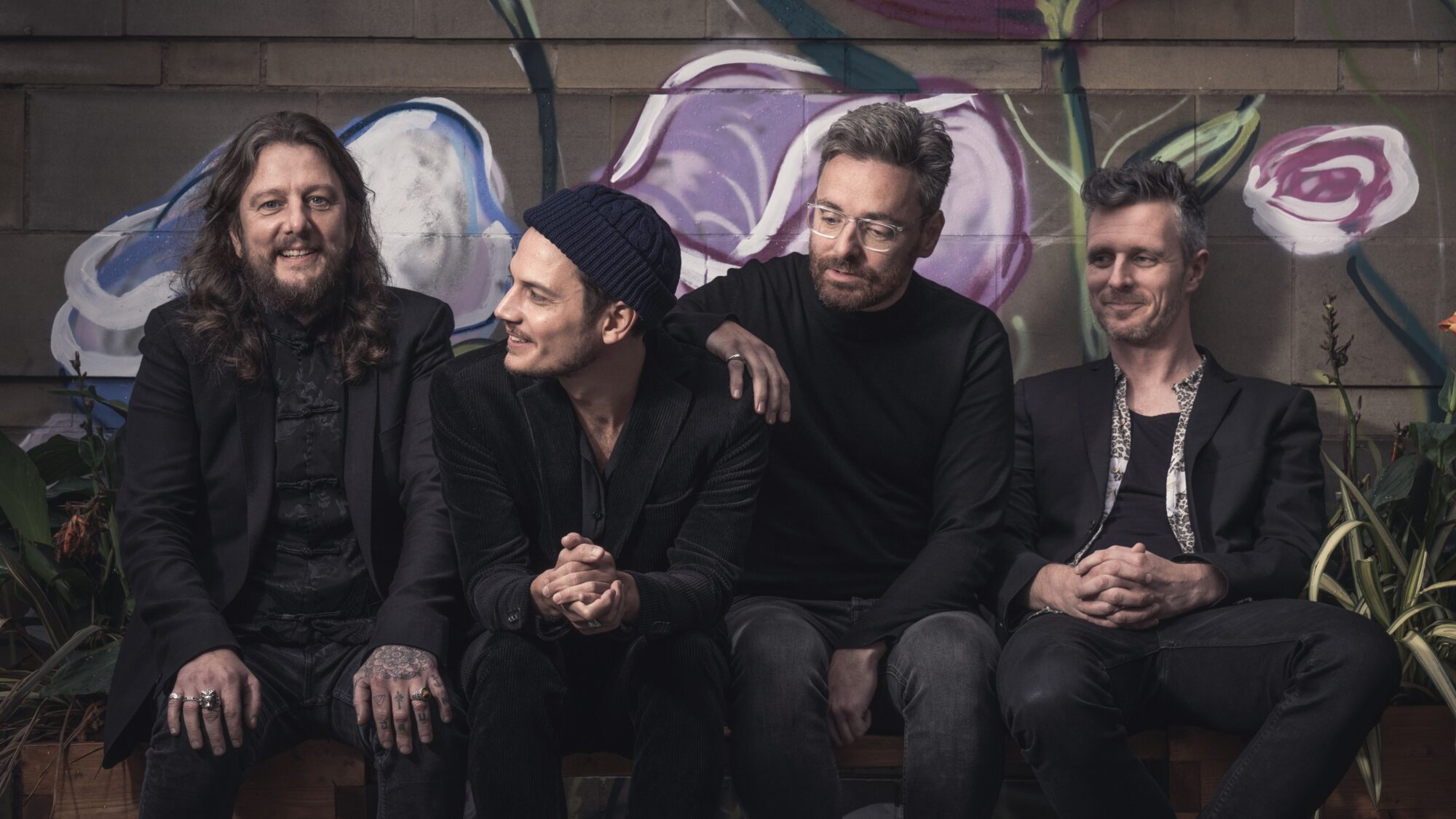 Maestros of melancholia The Slow Show talk to Louder Than War about missing their parents, making an album in lockdown when their singer and lyricist in a different country… and how they can’t wait to sup a pint in a Manchester pub.

Support Louder Than War by buying here from Sister Ray.

The Slow Show, who come from Manchester but now live in four cities in two countries, are defined by a very particular sound – slow, textured music rich in atmosphere, melody and space surrounding Rob Goodwin’s deep, warm baritone and heartfelt, emotional lyrics. Their new album brings a new dimension to songs about love, loss and loneliness, resulting in a record filled with a sense of euphoria and release. At least that’s how they see it.

The album title STILL LIFE is surely a play on words: stillness is The Slow Show’s modus operandi and survival has been very much on all our minds for the past two years. That’s a theme that runs through the album’s 11 new songs of love, loss and loneliness, countered by a sense of quiet resilience. Blinking, for an example, is “an ode to love and loyalty” that signals a renewed directness and a powerful punch in their music. “We did develop our sound’, says Rob Goodwin, the singer and lyricist. “We had to try something else. We felt we owed that to ourselves, and to the people that come and enjoy the music. We explored a lot of stuff: different sounds, different feelings, different ideas, different processes as well. Some of them didn’t work at all, but some did. It was difficult and challenging, but it felt good in the end.”

This experimental side to the creative process allowed the band to introduce new elements to their work. “Some new approaches and sounds crept in,” keyboardist Frederick ‘t Kindt admits. “Some were a far cry from our older work. For instance: after some initial encouragement from me, Rob was keen to sing a bit higher on this record. Chris was encouraged to make his drums a bit more present; some things almost sound like a breakbeat to my ears.”

Assembled remotely over the course of the past year, with Goodwin recording vocals from his adopted home in Dusseldorf, Germany, and the rest of band at theirs in three different cites in the UK, STILL LIFE takes conceptual inspiration from the experiences of lockdown. “Before the virus arrived I had a busy life; spending two weeks in Germany with my girlfriend and then flying to Manchester to work with Fred or to a gig.” Goodwin recalls. “And then all of a sudden, life came to a halt. It took a little getting used to, but I actually had a really nice realisation during that time. I understood that the slower life got, the more I saw. I spent a lot of time in nature, seeing things in a different perspective. And that’s what you need when you’re trying to create. You have to really look, and then you see things happening everywhere.”

The album brims with emotion and reverence towards the significant relationships we encounter in life. While Blinking is a defiant pledge to never giving up on the people you love, Woven Blue, conversely, deals with the aftermath of uncoupling, exploring the idea that meaningful relationships are very often woven and complex, making resolve difficult. These very personal tracks are counterbalanced with the more topical such as Breathe, which documents some of the unjust and heartbreaking scenes of 2020 with spoken word references to John Boyega’s emotional rallying cry in support of Black Lives Matter movement in London’s Hyde Park.

Tim Cooper talked to Rob Goodwin about the journey involved in the album and the frustrations of their tour being called off at the 11th hour. Again.

Tim Cooper: Your UK tour has just been postponed for a second (or is it third?) time, so my first question must be to ask why it’s happened again? Especially as we bought our tickets for your hometown show at Hallé St Peter’s back in August 2020!

Rob Goodwin: We’re very sorry to hear that. Each time we’ve been forced to postpone or cancel a tour during this awful pandemic, we’ve done so with very heavy hearts! Organising a tour is incredibly difficult, there are so many moving parts. Doing so during a global health pandemic has sadly been impossible at times and the situation is of course ever changing. Aside from the official guidelines which are different in each city and country, we’ve also had to consider people’s safety. There have been times where it would have been irresponsible to play concerts however much we’ve wanted to.

You do seem to have been particularly unlucky with timing when it comes to live dates and record releases during this pandemic.

It’s been a difficult time for us, like it has been for so many. We all live in different cities/countries and we’ve missed making music together. Travel bans and lockdowns have meant almost two years without seeing each other but the thought of touring again this summer is wonderful and incredibly motivating.

Leading on from that, how has the pandemic affected your ability to work together?

It’s been difficult. We recorded the entire album remotely which of course is possible but we often missed the human aspect of collaboration, of being a band.

Have there been any other changes in the band members’ circumstances since the last album?

Of course. Two years have passed and life moves on. Although our professional lives with the band have felt fairly static, our personal lives have all continued as they do.

As a songwriter, has the forced inactivity of lockdown, and the lack of real-life interactions and experiences, made it harder to come up with material for a new album? Or has it forced you to dig deeper into yourself for inspiration?

Writing has always been our way of making sense of things. We’ve written about how we’ve felt, things we’ve experienced or seen. ‘People’ have always been big inspirations for us. Their lives, their stories. In this respect our interactions have been limited but having said that we’re living in unprecedented times, politically, environmentally and of course there’s the Covid crisis. There’s been enough to write about.

Did you start off with an overall theme and did the songs spring from that bigger idea – or did the theme reveal itself at the end of the process?

The songs are all fairly self contained as far as their lyrical inspiration but we were interested in feelings of euphoria and release on this record. We definitely wanted to experiment with pulse and rhythm to create moments of feeling.

Could you pick any individual songs and expand on the ideas behind them?

Mountbatten [the opening song] is perhaps the most personal song lyrically. It’s inspired by river walks with my Mum and our chance encounters with a ‘bird in a field’. The song describes our loyal friendship, the unspoken understanding between a mother and son.

Space has always been the hallmark of your sound. This time you have filled some of it with elaborate, yet subtle, arrangements to create a ‘bigger’ sound… would you agree?

I hope so. Our goal has always been to create moments of feeling through soundscape. To move people. We‘ve always been excited about mixing genres but I think we‘ve pushed this even further on this record than we have previously.

Somehow it seems still to have the same sense of space within that framework – a kind of ‘extended minimalism’ if that makes any sense?

That sounds lovely, I’m pleased that’s how you perceive it. Knowing when to add or take away is a balance we‘re constantly treading.

In practical terms, what has been different in terms of writing, recording (and rehearsing) this time around, compared to previous albums?

Everything was remote. The writing, recording. We rehearsed for the first time in almost two years in December. It was a wonderful but slightly surreal feeling, almost like starting over.

Do you think those enforced changes have made a notable difference to the end product – and has it improved the band’s working relationship (and finished product)?

We‘ve always been incredibly grateful to make music, for the opportunities we’ve had. We‘ve certainly never taken our time making music together for granted but I think the time apart has made us realise just how much we enjoy making music together, how essential it is for us, that the bands bigger than the sum of it’s parts. It’s all very ‘clique’ but it’s how we feel.

Tell us what you have enjoyed (if anything) about the isolation of the last two years.

Life’s certainly slowed down. I think personally and professionally we‘ve all realised how precious time with people we care about is.

What you have missed most – and what do you look forward to most when this is over?

Live music, walks with my parents… and a pint in a Manchester pub!