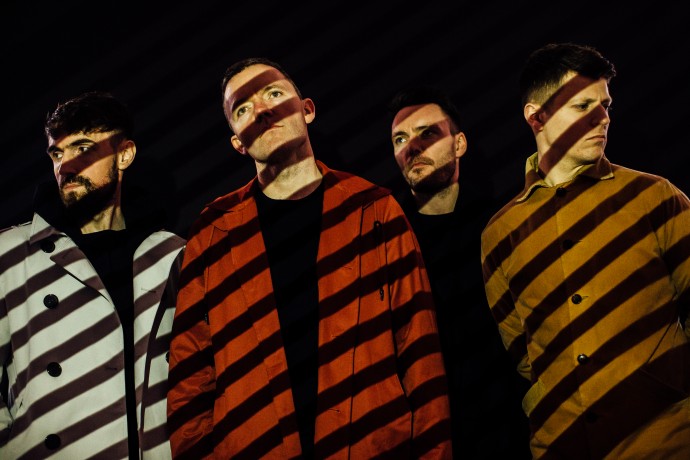 The Slow Readers Club have just released their latest and best album to date The Joy Of The Return. Main man John Robb earlier reviewed their single Killing Me and described it as brooding and magnificent (review here). Wayne Carey speaks to the band who reveal their favourite ten albums. There is nothing flash or trendy in their choice, just an honest down to earth pick of albums which you will love or hate…
David Whitworth – Drums.
Rage Against the Machine.
Rage Against the Machine.
“This came into my life just after leaving school and the U.K. music scene was changing, with heavier rock bands coming through. The grooves on this record are insane and the intensity and honesty in which it’s delivered; makes it feel so real and personal to me. It’s very impressive that they’ve been able to get that feel onto the record itself.”
Oasis
Definitely Maybe.
This might not be a “cool” choice but along with the Beatles, Oasis are probably the most important band that shaped my teenage years. Other bands will have influenced me more musically but this album feels like the foundation on which the last 20 years have been built. Supersonic was the first beat I ever learnt, I played Live Forever at my first ever gig at the Clifton Arms. They are also the band I’ve seen the most. I can listen to this album and feel significantly taller than I actually am.……still not that tall unfortunately!
Kurt Starkie – Guitar / Backing Vocals.
Nirvana.
Nevermind.
Nirvana had a huge impact on me when I was a kid, I started playing the guitar at about 11 or 12 years old and loved learning basic blues riffs and  Beatles intros, but when I first heard Nirvana I started to really get into rock and grunge. I think they just came at the perfect time as I was getting into guitar music. The album is full of instant tunes and brilliant instrumentation and has such an exciting energy. It was the gateway into that world for me anyway and has remained in my top albums list ever since.
The Smiths.
The Queen Is Dead.
It was really hard to pick an album that defines another key period in time for me growing up. The Stone Roses debut is so special to me too but The Smiths are my favourite overall and did a great body of work in a short space of time. The Queen Is Dead is their masterpiece in my eyes. I love everything about it, the beautiful imagery and humour in the lyrics and of course Marr’s amazing guitar work and the variety of themes across the record. It has the perfect opener too with that haunting rhythm. I wasn’t around when this came out originally obviously but it still seems to have sound tracked my youth like I imagine it will for future generations.
Jim Ryan – Bass.
Puressence.
Puressence.
Puressence was a band that I went to see quite a bit back in the day when I first started playing in bands. They’re from North Manchester near where I live and they used to rehearse in the same building as I did when I first started playing the bass. I’d hear them blasting out full sets in their room and then I’d try to work out how to play the tune. Their debut album was out before I started getting into them but I always remember the first track from the album (Near Distance) and last track (India) being absolutely massive at gigs. They have a huge sound which I like and Near Distance in particular is one of them that gets your head nodding along when you hear it. Loads of delayed guitars and big melodies.
Queen.
Greatest Hits 2.
This is a bit of a mad pick because it’s not something that influenced how I play. It’s just more of a thing that takes me back to listening to music when I was a kid. My Dad bought it on CD and I think it was when we got our first CD player in the house and it was the only thing we had to play so I didn’t have much choice. I just love the way it reminds me of being a kid in the house and Queen had some big tunes on that album. A Kind Of Magic, Under Pressure, Who Wants To Live Forever, The Show Must Go On. That’s not too bad. I think The Highlander movie has something to do with it too but I’ll save that for another day.

John Lennon.
Plastic Ono Band.
I love the rawness and intensity of it. It’s personal, philosophical and political and has a honesty and vulnerability to it lyrically. As a young lad growing up when you are looking for role models and figuring out who you are, Lennon seemed like the man to me, his position on religion and politics and class and humanity seemed like the truth to me. And never was that stuff more clearly expressed than on this record. Mother breaks my heart, as he deals with the childhood trauma and abandonment issues relating to his mother, her death and the absence of his father. It’s a deeply personal difficult listen especially with the primal scream stuff at the end but it’s brilliant for it.
Ian Brown.
Golden Greats.

This one just reminds me of good times, it was out while I was at Uni and was a persistent soundtrack while I was at my student house working on design and film stuff. It was also out when me and my wife got together and the singles were always on in indie clubs when we would go out in Manchester. It’s full of texture, got great crisp electronic grooves. It was probably the first record to turn me on to synths and from the early days of joining the band that was the kind of stuff I wanted to bring in, along with strings and stuff which was probably more influenced by The Verve. I love the rhythm and intonation in Brownie’s vocal melodies, that married with great synth and guitar riffs and dance beats. Set My Baby Free is probably my favourite track. I like how the synth riff almost trips over itself and the lyrics are awesome.

The Slow Readers Club’s joint picks.
Madonna.
The Immaculate Collection.
It’s not an influence on our sound or music in any way but more of an album that takes us back to the early days in the band when we were juggling jobs and the 9-5 grind with being in a band in the evening. We’d drive to gigs in Jim’s van and play to a half empty room, pack our gear away and set off back. The Madonna album is full of tunes we were all familiar with as young kids growing up so blasting that in the van at 1am and all belting the words out helped us forget about all the negative stuff and just be in the moment.
The Killers.
Hot Fuss.
This is another tour bus album that good for a singalong in the small hours. The first four five tracks are absolutely knock out singles. When it came out there hadn’t been an album that vibrant and consistent in quality for a good while. It has massive singles that are still indie dance floor fillers 16 years after it was released. Mr Brightside is euphoric and relatable and a perfect pop song.
The Slow Readers Club: The Joy Of The Return – NEW ALBUM OUT NOW!
ORDER HERE
Words by Wayne Carey who writes for Louder Than War. His author profile is here and you can catch his  website here