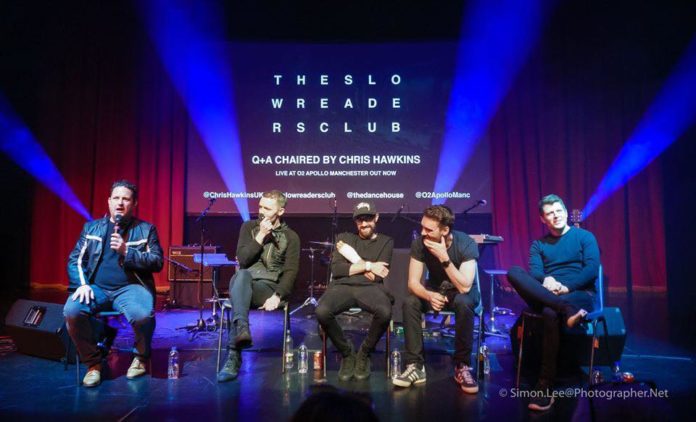 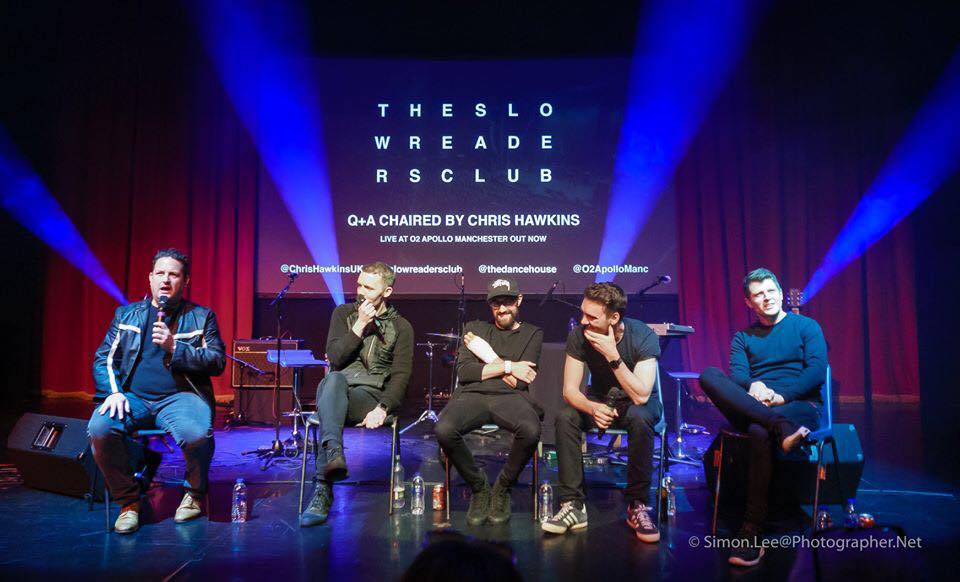 An intimate little get together, a Q&A and a ‘more stripped back than anticipated’  set make this a special night for the Slow Readers Club and their most faithful and dedicated. Mike Ainscoe is front row while Simon Lee grabs some photos.

A very special occasion indeed for those who had taken the time to pre-order the Live At O2 Apollo album and who were swift enough to grab the chance of being offered an absolute bargain of £5 a ticket for an evening of Q&A and music with the Readers. Some had shown a real dedication (or obsession) and had travelled from afar – Portsmouth, Kent and also the USA I believe were mentioned.  Some of us luckier ones had come down on the bus or hopped on the tram and trekked through a typically wet Manchester evening to the gem of a theatre that unfairly doesn’t often feature in lists of the city’s impressive roster of music venues.

So what did we get for our five quid? The usual well-stocked merch stall, although there can’t have been too many who hadn’t already got the bulk of what was on sale; even plenty of the famous Readers bobble hats were in evidence and given the weather….

With seemingly every seat taken, BBC 6 Music’s Chris Hawkins brought on David, Jim, Kurtis and Aaron for an hour’s chat that ranged from declaring his own unconditional support and undying love in spreading the word through the media to quizzing the band on everything on the ‘road to the Apollo’. 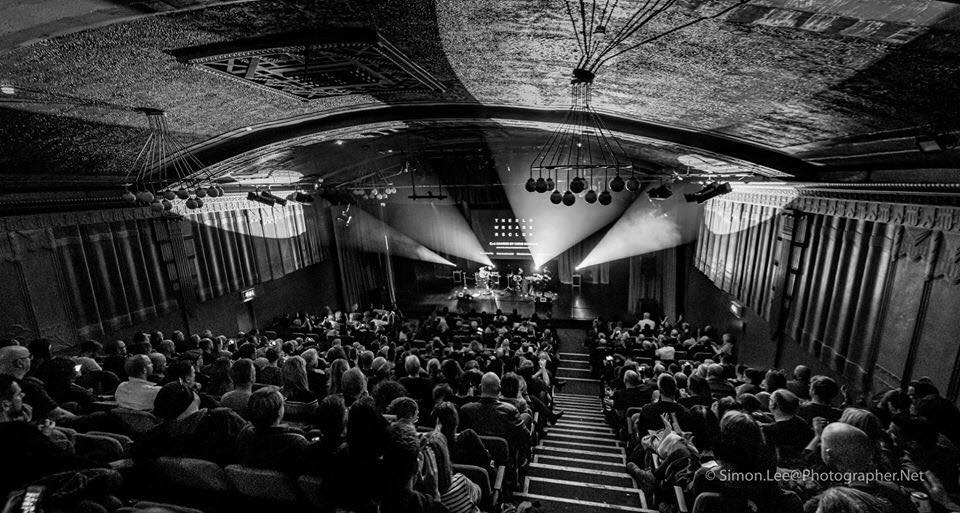 Punctuated by a selection of tracks from the Live At O2 Apollo film, it was nice to see all the band getting a decent turn on the mic rather than the usual reliance on the frontman to dominate proceedings. First up being Jim and the explanation of the huge bandaging on his left hand – literally just back from the hospital (he even had his wristband still on) an infection that’s resulted in the guys having to postpone some Irish dates and him unable to play that night. Aside from the slight downer of that opening gambit, amongst the stories from the road, the highlights included a few exchanges with Chris: “David, tell us about the first album…” – “I wasn’t on that one…” and “Kurtis would you like to introduce Forever In Your Debt…” – “This is Forever In Your Debt…” Touche.

Then there were revelations about David’s obsessive detail about the minutiae of the band; Aaron walking around Manchester with a ‘Madchester swagger’ (you know the one);  his devotion to social media; developing the stagecraft as the stages (especially supporting James) grew bigger, the Whats App group chat which they use to share ideas, imaginatively called ‘band’; developing songs and their working titles – guess which song started life as ‘Hippety Hop’?; their favourite  gigs that fortunately two of the band chose the Apollo and then Jim actually working on the same day as that momentous gig. Choice pick – the story of the famous gig in Middlesborough and Jim’s moment of “what the f**k am I doing?” as he was confronted by the man with the odd shoes…

Ultimately, the encounter confirmed what everyone in the room knew – that these are four guys in a band who are humble and down to earth and we be thankful that they engage in the way they do with the fans while they still can.

A brief opportunity allowed for the audience to pitch in, including the old chestnut “where does the band name come from?” before the acoustic set that saw Aaron, Dave and Kurtis having to strip back the stripped back even more by playing as a three-piece, with Aaron behind the guitar and keyboard as they took on a handful of Readers tracks in acoustic format. Taking the same bookends as the Apollo gig, it was interesting to hear the monumental Lunatic in a more restrained format and On The TV had to close proceedings and give everyone a chance to let off some steam with the familiar chant. 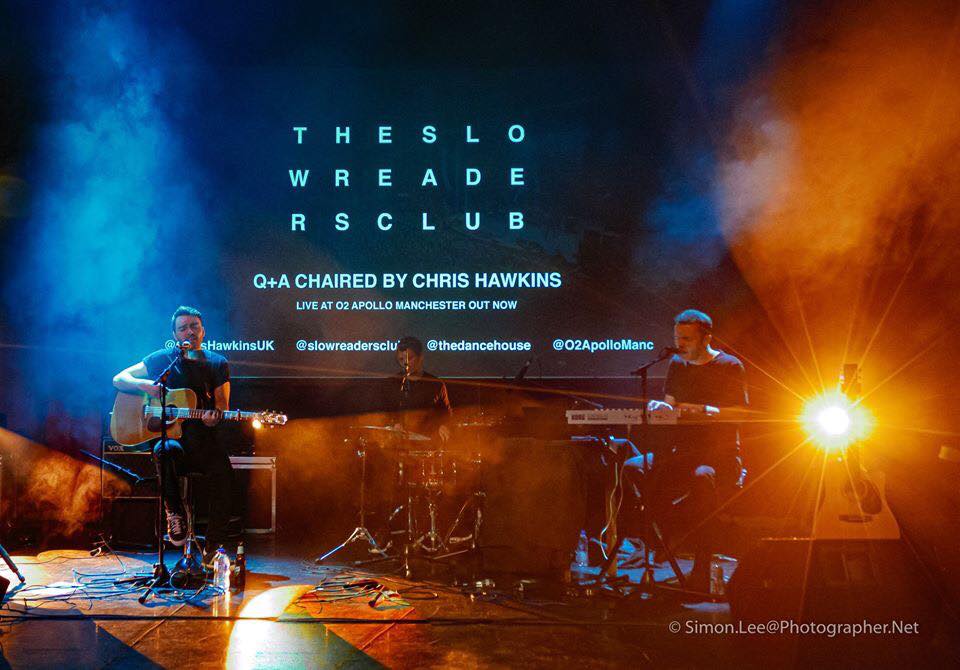 SET: Lunatic, Don’t Mind, Block Out The Sun, I Saw A Ghost, Know The Day Will Come, On The TV

The good news is that the new album is about to be mastered for release next Spring;  whether or not we may hear some new songs when we “see you in December,”  what a nice pre-Xmas treat that would be.

All words by Mike Ainscoe. You can find more of Mike’s writing on Louder Than War at his author’s archive. He can be found on Facebook.

All photos by Simon Lee. His work can be seen on his Facebook.