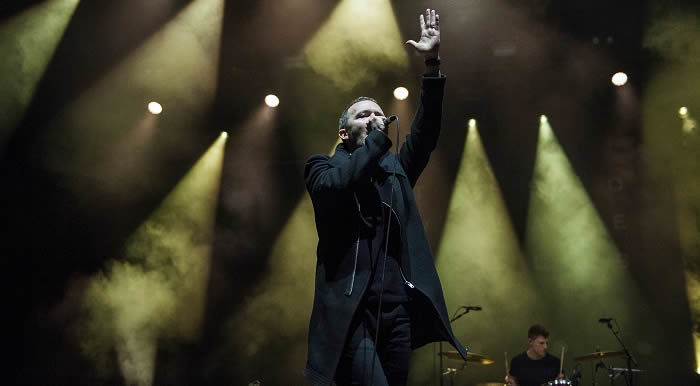 3500 people turned out and stood shoulder to shoulder to watch Manchester’s most likely perform the biggest gig of their career.  Nigel Carr reports back on one of the best performances by any band this year!

It’s been a long time coming for frontman Aaron Starkie. Omerta’s light flickered out in 2007 and The Slow Readers Club have been doggedly building a fan base since forming in 2011. That’s seven long years of working during the day and gigging at night. During that time the band has grown in confidence and stature, releasing their third album, Build A Tower on new label Modern Sky which charted at number 18 in May this year.

Tonight, all that hard work pays off – it’s as if the stars have aligned, the band giving a career busting best at one of the city’s top venues. Right from the off the crowd are fired up, chanting ‘Readers, readers’ the familiar war cry I’ve come to expect at one of their gigs. 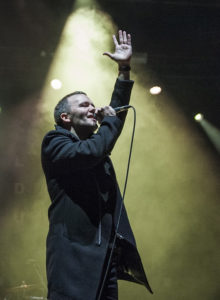 Lunatic, the lead single off Build A Tower opens the show and all I can see is a sea of smiling faces as these now, local heroes get into gear. Some of these faces have watched from the beginning when SRC were the best kept secret in Manchester, old faces, middle-aged faces and most excitingly of all, young faces, as the message filters down from parent to child and spreads amongst their friends.

It’s at that point you begin to realise that this band is on the cusp of super-stardom. The privileged few knew of course, early on, but when the kids start getting into a band, that’s when the sparks fly, that’s when the record sales and downloads start to accelerate and that’s when the dream of closing a festival like Glastonbury comes a little nearer. I’ll never forget watching Keane playing Bedshaped there. The emotion of hearing those sounds soaring over an adoring crowd and that same feeling fills me tonight, as everyone bar none is enraptured by the performance.

Plucking tracks from all three of their outstanding albums and with a now super confident Starkie leading them, it’s melody after melody, something that is sadly lacking in many of the ‘style over substance’ bands today. Its melody that sets the heart racing, it’s melody that can make you laugh and it’s melody that can make you cry. Don’t let anyone tell you any different. SRC have it in spades as the growing number of standout tracks volley forth. One More Minute, Plant The Seed, Cavalcade – it’s a none stop barrage that has the crowd cheering, arms aloft – Starkie leading them in salutes.

He dips and dives, playing to the fans and at one point stands amongst them, like a black clad messiah with hands reaching up to him. A previously shy frontman would stand behind the mic, marching to the beats, but not now. it’s a joy to see him full of confidence built up from a battery of live performances to a growing army of supporters.

They close the set with another blinder, Forever In Your Debt, Starkie telling the crowd beforehand that they would be quitting their day jobs on 21st December and embarking on a European tour in the Spring. It is the message that everyone wanted to hear. The years of touring, the dedication, the exquisite songwriting finally paying off.  The band close the gig with On The TV with the crowd joining in – the frontman leading them in a chant as he films them on his phone! He pulls the band together for a theatrical bow – the good feeling – the humbleness, really coming across.

This was a landmark show and a fantastic end to the year for one of this country’s most dedicated touring bands. I can only wish them well and hope they continue to enthral as they embark on the next phase of their career!

Lost In Your Gaze
I Saw a Ghost
On The TV

**Note: Apologies to LIINES who I missed due to the dreadful Manchester traffic!

All words by Nigel Carr©. More writing by Nigel on Louder Than War can be found in his Author’s archive. You can find Nigel on Twitter and Facebook and his own Website.

Photos by Mike Ainscoe© You can find Mike’s writing on Louder Than War at his author’s archive. He can be found on Facebook and is currently revamping his website…