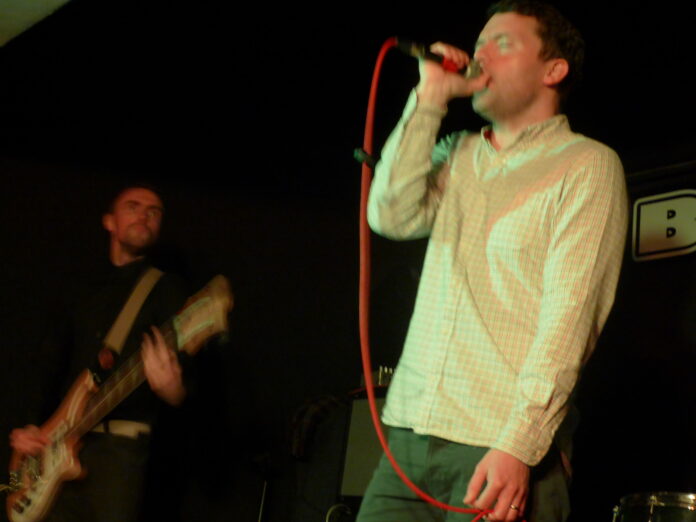 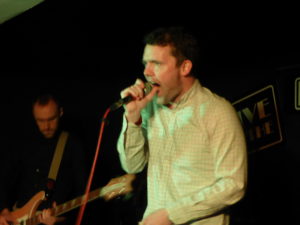 Sometimes there’s a band that you look at and listen to and wonder why they haven’t quite made the next step up.   The Slow Readers Club are one such band.  David Brown from Louder Than War went to catch them play a low-key pre-Christmas gig at the Blue Cat Cafe and try to explain the mystery.

In their previous guise as Omerta, The Slow Readers Club were hailed as one of the next big things.   Shades of Joy Division and pre-Bowman Editors meant their sound was radio-friendly at a time when guitar bands were enjoying one of those periodic renaissances.  Three superb singles and sold out gigs around town and beyond promised great things for their debut album, but then things went quiet until they resurfaced with a different line-up and a new name.

Their self-titled debut album surfaced in 2012 with some of those stand-out Omerta tracks such as One More Minute and Learn To Love The System, but shorn of that initial buzz and in an environment less receptive to them, they stayed on the local Manchester circuit, headlining their own shows at Dry, Night and Day and the like, without taking their strident emotive songs to the wider audience that they deserved. 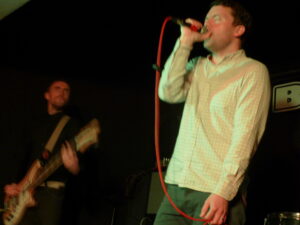 After a quiet 2013 they returned with the brilliant recent single Forever In Your Debt, one of this writer’s favourite tracks of the year, and its equally powerful b-side Days Like This Will Break Your Heart, both of which feature in the set along with another new song which bode extremely well for their follow-up album due some time in 2014.  Whilst maintaining the direct style of the debut album, of which stand-out tracks One More Minute, Block Out The Sun and Feet On Fire are highlights of the set, they hint at a widening of horizons.

As you’d expect for a band that’s been playing together for many years, they’re an incredibly tight live band and don’t simply replicate the records.  The songs are driven by drummer David’s thumping beats which allows guitarist Kurtis and bass player James to build a wall of sound through which Aaron’s powerful emotional vocals powers its way.   They’re a band made for much bigger halls and much wider audiences than this and hopefully the second album will get them the recognition they deserve.

We’re not the only people impressed.  Mani’s at the back watching them studiously and as soon as they’re done makes his way over to pass on his admiration and leaves with a copy of the album under his arm.

The Slow Readers Club released their single Forever In Your Debt in late 2013 and it’s available from their website.  They are also on Facebook and Twitter.

All words and images by David Brown.  You can read all his work for Louder Than War here.