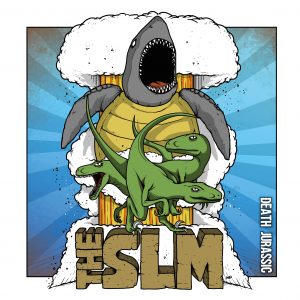 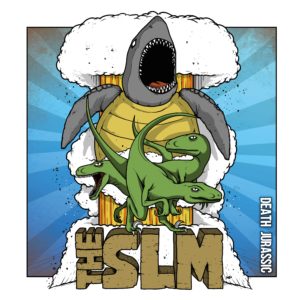 A whirlwind of skate-punk comic book horror grind pop from Portsmouth’s The SLM.

The SLM come from the world of comic book skate punk and have their tongues planted firmly in cheek (not to be advised whilst riding your deck…). Just check out the artwork. These South Coast thrash monkeys can’t concern themselves with the mere affairs of humanity, there’s a frickin’ radioactive island out there full of dinosaurs, zombies and turtle-shark hybrids and they only have 7 songs in which to tell this horror tale.

It all starts with a nuclear bomb hitting an atoll, and then all hell breaks loose.  They describe the album as  “Fast focused songs about dinosaurs, sharks, zombies and nuclear warfare” – says it all!  So, what does SLM stand for anyway?  I guessed it might have been Shark Loving Motherfuckers.  Friends of mine with an intense dislike for Portsmouth (stupid South Coast rivalry) suggested the word ‘skate’ should be in there…and they don’t mean a deck with red Kryps, nudge, nudge….  I know the suspense is killing you…SLM are the Shabazz Love Monkey.  Yep, they’re stupid skate punks with a stupid name to boot.  But they know their thrash.

If you discount the epic closer “Sword of the Dragon” the average song length is about 1’30”.  If you include that they still turn in  7 tracks in 15 minutes! Perfect for people with a short attention span (well done for reading this far).  The singing is at times semi-tuneful in a lazy sounding fashion and at others gruff shouty hardcore. The guitar ranges from that whiney Fat Wreck style to thrash metal chug, pitch harmonics and hammer-ons. Meanwhile the drums and bass barrel along throughout keeping the SLM to a good pace.  I would say they thunder along but I guess the Thunder Cats themed LP is yet to come.

If you’re looking for reference points, I’d include The Stupids, Acid Reign, bit of NoFX, occasional latter era Propagandhi, turned up baseball cap peaks, bermuda shorts and Hawaiian shirts. Oh, and when they indulge their love of thrash metal we are talking more Electro Hippies than Slayer.

The vinyl release is backed with their 2014 zombie shark themed “Death Aquatic” – 9 tracks complete with samples and references from Jaws (“My name is Quint”) and Teenage Mutant Ninja Turtles (“Terror of the Shredder”) .  The occasional foray into icky icky ska-punk upstrokes on their first LP doesn’t occur often enough to annoy me.

Bound to be popular with a grinning crowd of skaters, punks and hardcore kids, this LP has been released by a whole crowd of labels: CBRG Records, Food Waste records, Autonamonster Records, Shatterpunk Distro, Smegma Records and Angry Scenes Records. xhardcorexyouxknowxthexscorex

Get your download or vinyl LP from their bandcamp page or check them out on Facecrack.

Words by Nathan Brown. More of his writing for Louder Than War can be found in his author’s archive.