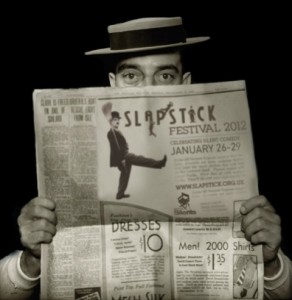 In August 2010 a silent film society started in Bristol with the intent, amongst other thing’s, to “Raise awareness, knowledge and appreciation of silent Film”.

After a few years of successful screenings Bristol Silents, as the society became known, devised & hosted an offshoot to itself, namely the worlds first ever festival devoted to silent comedy which, for obvious reasons, was called Slapstick Festival. The festival involved a weekend of screenings at various venues across Bristol & all the events were devoted to the silent comedy stars of yesteryear. These stars are still really well known in comedy circles (I’ll challenge you to find one comedian who doesn’t cite one, some or all of Buster Keaton, Harold Lloyd, Charlie Chaplin, Laurel & Hardy etc as influences) but whose names we felt were beginning to become less well remembered by the general public.

The first year’s festival was a relatively minor affair (compared the current incarnation of the festival anyway) but it was successful enough for the Bristol Evening Post to hail the event as “the start of another great Bristolian institution.”

The festival has now moved on so to encompasses not only events about (& screenings of) the stars of the silent era but we now also have events showcasing more contemporary comedians. By doing this we’re trying to highlight the link between the silent comedians & more contemporary comedy stars. The list of people who’ve dedicated their time to the festival is too lengthy to name them all, but last year alone we had all The Goodies, Shappi Khorsandi, Rob Bryden, Barry Cryer & Shaun the Sheep amongst others. In addition to these comedians (and sheep) we’re also proud to have involved with the festival people who are considered giants in the world of silent film. People like the OscarÃ‚Â® winning Kevin Brownlow, the director of Pordenone Silent film festival David Robinson and, because no silent film should be allowed to be screened without a musical accompaniment, high calibre musicians like Guenter Buchwald, Stephen Horne & The European Silent Film Virtuosi.

In 2008 in collaboration with Aardman Animations (probably our greatest supporters & without whom it’s safe to say the festival wouldn’t exist in it’s current form) we developed The Aardman/Slapstick Award which is awarded to “artists who have significantly contributed to the fine art of silent and visual comedy”. Previous recipients have included Eric Sykes (in particular for his sketch ‘The Plank’) Michael Palin & The Goodies themselves.

Amongst the events during this years festival (26th Jan – 29th Jan) we have Terry Jones in conversation with Sanjeev Bhaskar, talking about Life Of Brian & introducing a screening of the film. Opening the festival on Thursday we have a Dad’s Army special, with Ian “Private Pike” Lavender talking about his role in the series. Our gala event on Friday at Colston Hall concentrates on the genius that is Buster Keaton. Griff Rhys Jones will be on stage talking about Keaton & will then introduce a screening of his masterpiece The General. Around these three events the heart & sole of the festival will be playing at both Arnolfini & Watershed where there will be events concentrating on many of the original stars of silent comedies, both the well known & not so well known.

In addition to the above we’re excited to be awarding this years Aardman/Slapstick award to the until now sadly overlooked comedic genius that is Pierre Ãƒâ€°taix. You probably won’t have heard of Msr Ãƒâ€°taix because, due to a disastrous rights deal, his films have not been seen for almost 40 years. Throughout the sixties Pierre Ãƒâ€°taix consistently produced some of the finest visual comedies on screen & we’re pretty excited to be bringing him over to Bristol for the festival. The Guardian newspaper ran a piece about him after we announced he was to the next recipient of our award, so if you’d like more information on him feel free to click through on his link

Finally, because everyone likes a list you can find below a list of the Top Ten slapstick comedies. This list was compiled by the aforementioned OscarÃ‚Â® winner Kevin Brownlow. It is limited to one title per comedian and is in no particular order. Finally, as Kevin himself commented, the decision was really difficult as there are so many equally wonderful films that he had to cut out. I’m sure some of your favourites will be missed so feel free to shout in the comments if that’s the case.