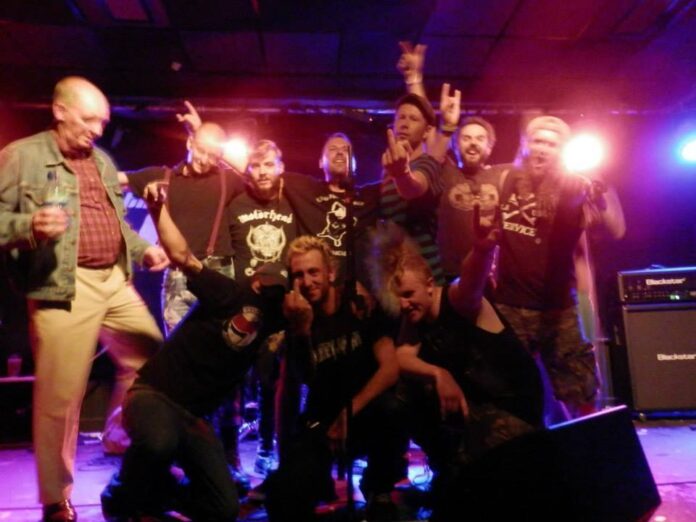 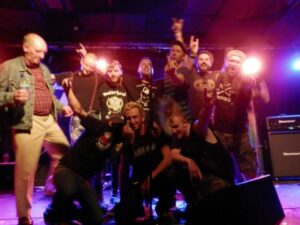 I love nights out with my mate Ian because we’re chalk and cheese. He’s teetotal, I drink too much. He’s polite, reserved and a tad shy. I’m rude, talk to anyone and get in trouble. My antics amuse Ian and he’s been known to save my skin on occaison.

Tonight he almost had to save me from a kicking from a singer’s girlfriend, an angry female Mohawk who I inadvertently accused of being posh due to her clearcut call-centre voice.  She got her revenge by pointing out that my hair resembled Bowies in Labyrinth if I had a few extentions … anyhoo …

Ian likes a far wider range of music than me but we share the same enthusiasm for a fair few bands and share a dislike for certain subgenres. Like so called Ska-Punk.

Skoisters as the name explicitly tells us, are a Ska-Oi! band. I said to one of their fans who’d travelled down from their hometown, Bournemouth to see them: “I wish they’d make their mind up whether they are a Ska band or an Oi! band”

“They have mate, they are fuckin’ both! Hur-hur-hur-hur!”

They’re a pretty good Oi! band, but they seem to lean a bit too heavy on the ska, which they don’t do quite as well.  I don’t doubt their love of the genre but I get the impression that they probably get more Saturday pub gigs appealing to the dancing feet of Two Tone lovin’ middle aged white van men in Fred Perrys and their ladies than sticking to pure ramalama Oi!

They come into their own when they (last) resort to covers of Borstal Breakout, Staring At The Rudeboys and Wonderful World, which get everyone dancing on this occasion. Their own Liams Boots goes down well too. 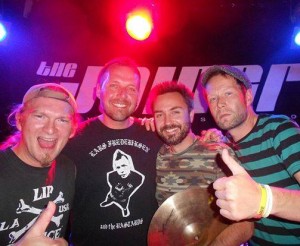 The Crash Landings (or TCL as they abbreviate it to) are a very good punk pop metal combo also from Bournemouth with a tight, punchy set of  short catchy songs with great squeeling guitar solos.  Fronted by guitar playing vocalist called Simon, a chirpy-cheeky-chappy who’s songs about life are part piss-take, part politico-rant but with the emphasis of good tuneage.

They sound like an updated version of bands  like The Members or Leyton Buzzards, but in steel toe capped boots and with a cross-cult appeal; skins, punks and metallers will all love’em. Their lead guitarist probably moonlights in a metal covers band and is a shit hot musician with long curly hair and big khaki shorts.  The drummer’s got an indie beard, the bassist is black band t-shirt guy and the singer sports a flatcap, so image wise they don’t look as fabulous as they sound.  Songwise they have picked their best, an anti-Daily Mail number called Hatemail and a song for everyone who’s made a bad career choice called Take Your Job And Shove It as their forthcoming single.  A band to look out for at next years Rebellion I imagine.

Fresh from playing Guilfest and bottom of the bill were Pompey Punks Secondhand Citizens hereinafter referred to as “The Worst Band I Have Ever Seen, But Also The Funniest” per my mate Ian.

Full disclosure; I do sort of know singer Ritchie Murphy from a hundred gigs over the past decade. One of natures anarchists and a walking/talking punk character/caricature.

He’s got a Tommy Cooper thing about him; he’s funny without even trying. You just don’t know what he’s gonna do next.  It is a glorious incompetence.  Introducing the first song Ritchie confidently announces “This one’s called …” and instantly looses the plot. “Wassitt called again?” he says turning to the drummer.  Vacunt Moron and Harry Is a Nazi sound like songs rejected by the Unwanted (on the 1977 Live at the Roxy album) and the scene from US punksploitation classic Suburbia featuring D.I  doing Richard Hung Himself.

Their piece de resistence is however a song which goes ” We are the best worst band you have fuckin’ seen. We are the worstest band in this fuckin’ scene. ( dramatic pause)  We are human excrement! (Da-na na-na na-na-na)  We are fucking excellent” which had Ian and I doubling up with laughter.   They are exactly what its says on the tin and definitely not boring!

A funny old night with some great moments of comedy, anarchy and music.