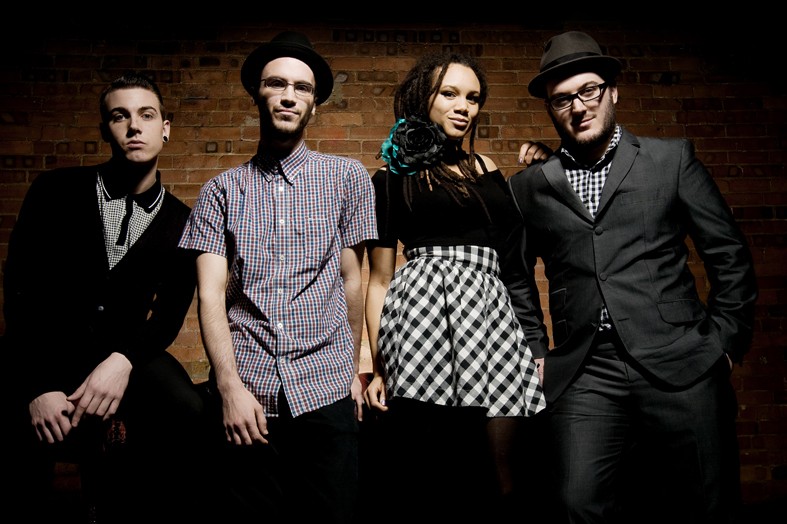 For those of you who haven’t heard of The Skints, 2012 might be the year that changes that fact.

This London ska/reggae four piece are just about to release their highly anticipated second album, ‘Part and Parcel’, on Bomber Music, so Louder Than War sat down with drummer and vocalist Jamie for a catch up and chat about the new album…

LTW: For those of our readers who have no idea who are you are, tell us a little bit about The Skints. Who are your main influences? How did you meet?

The Skints is myself (Jamie Kyriakides), Josh Waters Rudge, Marcia Richards and Jonathan Doyle slappin’ da baaaaaaass! We all hung out in the same friend group for years, The Skints had already started up half way through secondary school as a ska pop punk outfit with many different band members coming and going.
I joined the band around about February 2007. I was working on a different project at the time and got a call from Jon asking if I wanted to try out on drums and vocals, so I said “alright, I’ll give it a go” and from that day forward The Skints has pretty much gone from strength to strength as a band. We’ve been to many places, taken our fair share of risks and put our hearts and souls into the music we make.

Our influences are a very mixed bag musically, we love all kinds of music really but I guess if I have to be a little more specific then I’d say I’m really into my Reggae, Dub, Ska, Steppas, Lovers Rock, Dancehall, Hip Hop, Soul, Funk, Jazz, Blues etc as are the rest of the band. Josh is really into his British Grime MC’s and stuff and so he really incorporates that into the sound whenever he’s writing. Marcia’s got a classical edge to her writing, she’s got a really good ear for arrangements and stuff and Jon slappah dah baaaaaaaaass!
I think coming up through the punk scene though a lot of our influences have been the bands that we’ve listened to and then got the chance to play with and then befriended over the years, like Capdown, Random Hand, Claypigeon, Mouthwash and Bedouin Soundclash.

LTW: The first single, Ratatat, has much more of a chilled vibe than some of your previous singles, tell us about the rest of the album?

This album is strictly rootsier than its previous counterpart Live.Breathe.Build.Believe. Some of it is chilled and some of it will hopefully get you up dancing about the place. It still has its diversity and I think people will realize this once they give it a good couple of listens.

LTW: The new album was written whilst you maintained a crazy touring schedule last year, how was this writing process different to that for Live. Breathe. Build. Believe.?

The writing process for Live.Breathe.Build.Believe was the first full length album we’d ever recorded as a band and so much of the material we had for that record was already written and ready to go from over the first two years of playing and writing together. We already knew the songs so well, we knew where we wanted them to go and how we wanted them to sound on an album and how it was all going to join up. We weren’t touring and playing festivals as consistently at that point either so there was no rush, no panic to get it done, nobody was on our backs and we still managed to record it in a matter of 5 days!

LTW: The video for Ratatat is East London heavy, how important was where you grew up in influencing your sound as a band?

It’s very important to us being from London, especially growing up in the east where I’m from, it’s all sort of gritty industrial estates and that, a real concrete jungle vibe. It’s as inspiring as it is depressing at times, but its home and I’ll always have good memories of this place as well as shitty ones.
You could call it a bit of a love-hate type relationship we all have with London but I think the love outweighs the hate considerably and anytime we’re out on the road for a couple of weeks into a tour or something I definitely get a little home sick. But to be honest, right now we’re all just itching to get back out there and play shows!

LTW: Has the list of instruments used to make your music increased much on this album?

Yes, we have a Glockenspiel now and it’s not going anywhere… hehe. Oh, and Marcia farted through a Gramophone. These are facts…
This album’s recording process was part-funded though pledges made by your fans. Was it a weird feeling seeing your fans supporting you this way? Is it a process you’d recommend for other bands?
I think the pledge thing was a great idea for us and for any other bands who are worth their salt. It was a very humbling thing to watch happen, we have some very loyal fans and friends who we’ve made over the years from playing and touring all over the shop who all chipped in to pledge as well, I would certainly recommend any band who’s been going for as long as we have to give it a go for sure. 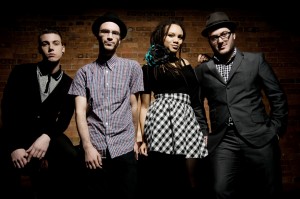 LTW: It felt at Rebellion this year that there’s a really strong group of bands flying the ska/reggae flag at the moment, do you agree? How important has this been for touring for you guys?

There definitely has been a noticeable abundance of growing Ska and Reggae bands coming out of the woodwork recently. Honestly, I think it’s great that a new generation of kids are starting to recognize this music and get into it and create their own bands and make their own interpretations of it because that’s the only way music moves forward. If we’re somewhat responsible for them getting into this new wave of an old, seemingly put-to-rest style of music then that’s fantastic and I encourage it whole heartedly.

LTW: Who’s the most annoying member of the band to share a tour bus with? Who has control of the radio, or do you mainly share musical tastes?

Hahaha erm… nobody in this band is annoying per say, but if I had to name names and say who gets ragged on most of the time I’d have to say Jon boy Doyle, (understand that this is purely for the fact that Jon is a funny fucker and much of the time it happens out of much love and jest and even Jon knows this, he can take it).
Overall, we all dish it out to each other pretty evenly. We’re all close enough to be able to not take things literally and if it happens that somebody does take something to heart, it resolves itself pretty quickly. We’ve all got love for one another, we’re all mates so no one gets bitter.
On the tour bus, it tends to be Josh up front with the sounds so it could be anything. We could be listening to some dirty grime or some sing-along hits from back in the day (Midus Touch by Midnight Star seems to occur often). Sometimes we all go crazy to Destiny’s Child songs in the van, and no I did not stutter when I just said that…

LTW: What’s next for the band? What are the plans festival-wise this year?

The next thing for The Skints is the You Me At Six tour which starts on the 12th March I believe, and it’s going to be 3 weeks of great shows, great peeps and great musical feats. Haha! It should be an interesting series of developments that’s for sure, hopefully the kids will like us and will not lynch us with rotten vegetables and dead squirrels.
Festival-wise, we’ve got a whole bunch of them happening this year, Boomtown was a highlight of mine from last year so I’m rather looking forward to that again this year, One Love Festival also should be a lot of fun.

Thanks to Jamie for sitting down with Louder Than War, good luck and watch out for the dead squirrels!

Ratatat, the first single from ‘Part and Parcel’ is out now