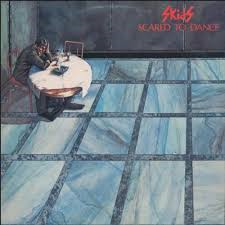 3CD issue of the Scottish Post Punk band’s 1979 debut album, with two extra discs containing “The Virgin Demos” and a live set from the Marquee in 1978……..LTW’s Ian Canty delves once more Into The Valley….

The comeback tour of the Skids has been one of the highlights of this year’s live calendar. Though they’ve conducted reunions for the past ten years this was the first time out on a proper tour since the original band broke up. I would hazard a guess few people went away from any of those concerts feeling underwhelmed. The late Stuart Adamson was missed of course, how could he not be, but the Watson “dad and lad” combination worked really well and acted as a fitting tribute to the great man. Richard Jobson was back in his pomp and along with original member Willie Simpson and 1980 vintage Mike Ballie on drums rolled back the years with wonderful performances. I caught them on the Southampton date of the tour and they were without doubt one of the best live bands I’ve ever seen – stunning power and energy. The promise of more live dates and a new album (Burning Cities, due to be released January 2018) looks positively tantalising.

But let us go right back to the start with this new expanded issue of the first Skids LP. Forming in Dunfermline in 1977 when locals Stuart Adamson and Willie Simpson were enthused by the burgeoning Punk scene, they added Tom Kellichan on drums before chancing on the Kirkcaldy born Richard Jobson, who completed the initial Skids line up on vocals. Within six months of their formation they put out the Charles EP on the local No Bad label. This record created a buzz about the band and shortly after its release the Skids were signed up by major label Virgin Records, who were concentrating a large part of their operation at the time on New Wave/Punk outfits.

Their first two singles with the big boys, Sweet Suburbia and The Saints Are Coming, nudged them into the lower end of the UK charts. But the arrival in early 1979 of the third 7″ Into The Valley and their first album Scared To Dance put them right at the business end so to speak, Valley reaching the Top Ten and the LP nestling comfortably at number 19 in the album charts.

In many ways the Skids were the perfect band for the Post-Punk Winter of Discontent of 78/79 – influenced by the original Punk burst of creativity in 1976, but now forged into something different (despite later on in 1979 Adamson protesting that they were still a Punk band in the music press), more thoughtful but with big catchy choruses and that one of a kind guitar sound. Jobson’s lyrics were different from what people saw as the “usual Punk concerns” – he wrote a lot about the pointlessness of war and emotional trauma with his words and Adamson’s mighty guitar giving a clear sense of location to where they came from – both literally and figuratively.

The Skids debut album is still an enjoyable and invigorating record to listen to all these years after the fact. Scared To Dance hangs together like a “proper album”, not just a collection of songs, with a genuine ebb and flow – like a work of art really and the extracted singles don’t feel like add-ons at all. After the bracing fire of Into The Valley, the title track itself sweeps in languidly, one of the last lyrics Adamson wrote for the Skids. This showed once and for all they weren’t a one-trick pony. Dramatic singing, mid-paced with slashing guitar sweeping in and out, with a confidence in knowing that what they were doing is unique and important. Dossier (Of Fallibility), with its almost waltz beat and spidery form, rammed home their desire to break free from any constrictions.

Though the album itself and the associated single tracks appended to it are good enough in themselves (that debut single Charles was the ideal introduction to the band, even if they were still working themselves out at the time), the real hooks in this set for Skids fans will be the Virgin Demos (all tracks previously unreleased) and live selection from the Marquee, which make up discs 2 and 3 respectively on this collection.

The Virgin Demos are a great find, 12 previously unreleased recordings from just prior to inking the deal with that label. Basically recorded but with good sound quality, this set of tracks finds the band in a state of metamorphosis. There’s still some 12 Bar employed in a few of the songs (Design and London most prominently), but they were slowly working themselves away from Punk that was based in old Rock & Roll into something that was truly their own. Their Punk roots show most clearly on a recut of EP track Reasons and Let Us In, but for the most part you can see the band were making progress into something unique.

The selections that made their way onto to being released lead the way of what was new for the band – Sweet Suburbia is in a more basic form to the single version but still effective and album tracks Scared To Dance And Calling The Tune are “almost there” sketches at this stage, just awaiting the finishing touches to be added in the more formal recordings for the LP.

The “one the face of it” flippantly titled Zit is actually a sombre story of a death by drowning. Quite complex, with a whistle and piano intro going into separate atmospheric sections, it was obviously a contender for the album. It remained in the live set for the Marquee gig and also figured in a Peel Session, but for one reason or another, it never made the cut. The mid-paced psychodrama of Withdrawal Symptoms must have come close as well, with Summer only missing out possibly because of its simplicity. These demos are the holy grail to Skids fans and I’m pleased to report they are no let down.

The live gig recorded on 1st November 1978 at the Marquee Club in London prior to the album’s release on disc 3 is another delight – professionally recorded (TV Stars from here ended up on the flipside to Into The Valley), it shows a band confident in their abilities and totally at home in the live setting. For me this is the best commercially available live artefact of the Skids in their original incarnation. To show how fast the band were moving at the time, only 6 songs from the Virgin Demos of earlier in the year remain in their set-list. Into The Valley makes its live debut here, to a Marquee audience that was still stuck in the phoney Punk ritual of spitting (Jobson comes up with a neat rebuke to the gobbers, something along the lines of “Spit up in the air, let it land on your own face. See how it feels up here”).

Before a top rendition of Hope And Glory Jobson namechecks and credits Vic Godard and the Subway Sect, an unexpected influence on the Skids for most people I would have thought but when you think of it, totally apt. There was a similar rigour in their approach. Jobbo’s intro for Night And Day stops the crowd in its tracks, the harrowing story of an attack and rape, dark subject matter for those still fighting the 76 Punk war.

Of One Skin gets two outings and highlights Kellichan’s powerhouse drumming, the first version getting the set off to a flying start. From there on the Skids never really let up. Early song Contusion gets a rousing treatment and though The Saints Are Coming gets a different, one note intro from the single version, it’s still a stormer. Bar the rather throwaway version of Lou Reed’s Walk On The Wild Side, this disc is non-stop goodness – Adamson is in great form despite his guitar occasionally careening out of tune for a moment, Simpson is spot on and Jobson relishing his role as frontman, totally in control of what could have been a hostile crowd. He is in great voice too.

With this 3CD collection you really do get a sense of how quickly the Skids were developing during the course of 1978. Ideally you should listen to it backwards: disc 3 first, followed then by 2 and then 1 (but with the bonus single tracks slotting in somewhere in between – sorry if this is getting confusing). It is an excellent summing up of the Skids early years and the progress they made in leaps and bounds over a 12 month period. They may have been Scared To Dance, but they weren’t scared to try and create something both brilliant and new.