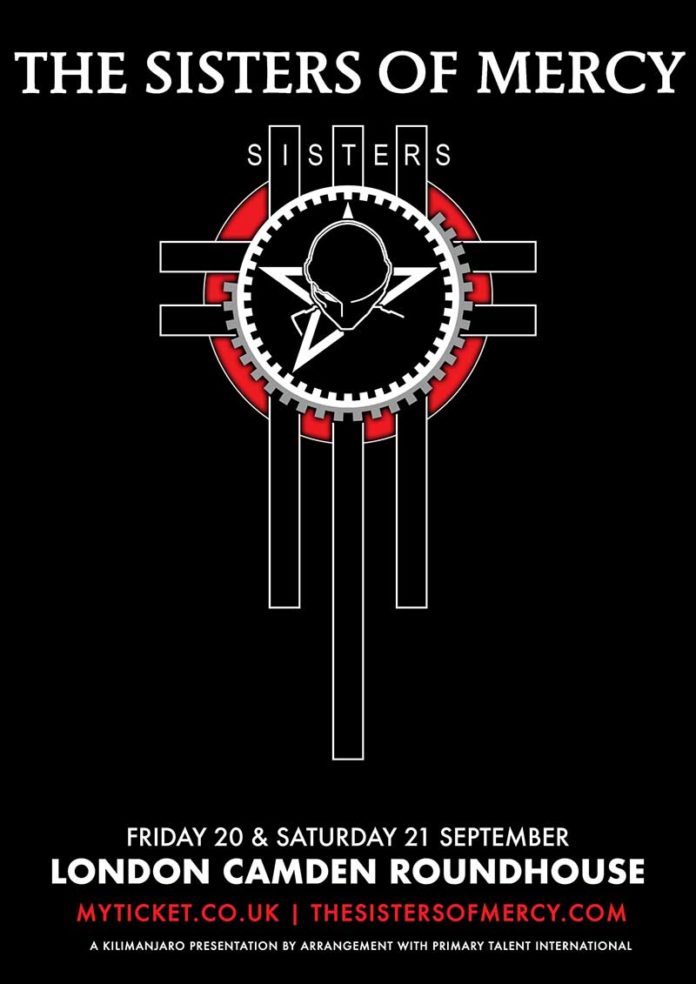 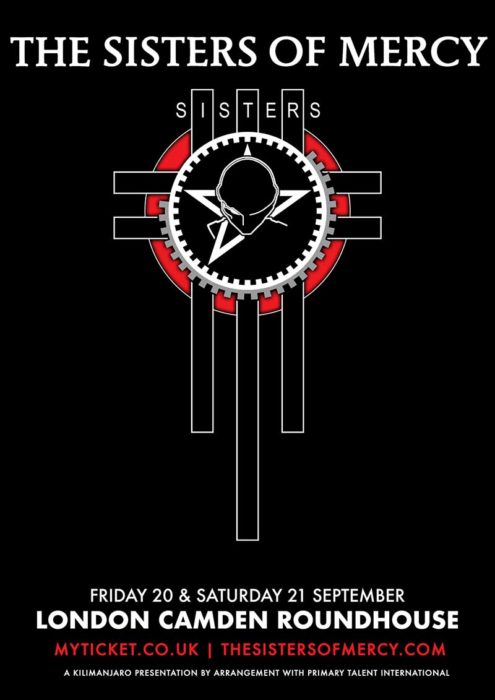 THE SISTERS OF MERCY
THE ROUNDHOUSE
SAT SEPT 21st 2019

The Sisters Of Mercy are an enigma wrapped in a riddle surrounded by layers of dry ice, novelist Julie Hamill attempts to unravel the imperial darkness and is further enamoured by their delicious mystery…

The Sisters got in my skin when I was fifteen, after I started going out with the first goth in town, Alyn.  He looked like Andrew Eldritch, black jeans and jacket, sculpted face, black hair, usually alone with the air of a baddie. He didn’t look like anybody else in Airdrie.  This mysterious lonesome goth put the needle on The Reptile House EP, and then First And Last And Always, after which I followed the band for myself and completed an effective teen transfer to the dark side.  I fell for The Sisters, and enjoyed a quicksand sink into inky songs which, over time got rockier and punched out of the radio like gunfire.

Thirty years on, The Sisters Of Mercy are still one of my most listened to bands. They sound only like themselves, and this can’t be over-emphisised.  They are a fix, a buzz, everything Andrew Eldritch delivers in hot deep drawl, and as I head to The Roundhouse I feel the thrill of fifteen, and I’m absolutely desperate to hear ‘Marian’.

There’s a blinding lightshow of blue spot lights amidst the darkness of the stage as More opens the show, and yes, Andrew (interviewed in depth here) sounds magnificent and deep and distinct and brutal and croaky and precise and exactly and bang on – as he should.  The crowd immediately shout back ‘MORE!’ in response and we’re off on a high bounce.  However. I can’t see the boss.  Where is he? Oh!  He was at the side of the stage doing the intro.  Now he’s at the centre mic.  Wait, he’s moved again. In and out of the black to the back, front, left and right, impossible to see. Thus ensues a show where my eyes chase Eldritch round the stage in and out of flashing lights and shadows as he plays hide and seek and I try to get a glimpse of his Voldemort silhouette.  I’m frustrated with his fidgeting but his voice is just perfect.

The new 6’5” tall guitarist, Dylan Smith, makes an impressive frame as he delivers the crispy twisty Sisters sounds really well, particularly on Alice, when the lights take a ballistic turn.  The crowd gives it back ten fold.  Arms are up in the air voices sing every word as the band race through the set with customary and satisfying zero chit-chat in between.  Good.  I don’t want the weather.  We’re standing at the back near the pillars and I enjoy seeing the finger shapes of hands through the lights which all adds to slight horror film ambience but at this point I’m jealous of those crushed at the front, getting the full black rush.

The setlist is a mix of old and new.  One of the new songs, Show Me, sounds amazing and I’m dying to hear it again.  First And Last And Always has been slowed down a bit since the departure of the wondrous Chris Catalyst, but it’s still played so fast it’s like it’s been run inside a washing machine on spin.  Nobody is complaining and old goths in vintage tshirts find youth in their bodies to wobble as we’re all transported back to better times. Everybody is loving Arms which thrusts henceforth with romance.

Dominion/Mother Russiasuits the venue and booms out into the round with brutal dominance. Flood II does it again, the sound is nailed.  We’re treated to No Time To Cry but sadly no Marian which was played the night before.

Shuffling out, I notice that everybody is smiling.  There is jubilance in the dark.

Julie Hamill is a London-based Scottish author and broadcaster with a new novel, Jackie out on 15 October, 2019.