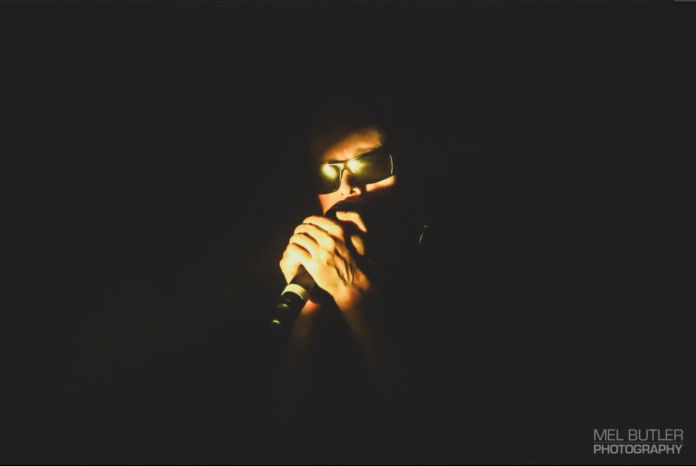 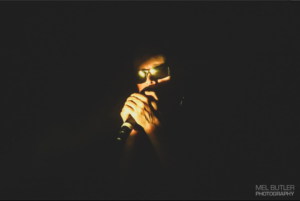 Great new songs, a regained spark and that voice back again – tonight was pretty damn good despite the minority of naysayers. Could the longer-than-long awaited new album be about to come out?

It’s true to say that the Sisters Of Mercy are an enigma wrapped in a riddle wrapped in banks of dry ice.

This is far from a normal rock show and they are far from being a normal band. Their introvert/extrovert approach with its dark themes and darker sense of humour confounds and confronts and, like so many post punk bands, makes little concession to the cheery bonhomie of trad rock.

For starters, they still contract their music on top of a drum machine. There is no sweating gunning drummer pushing air and twirling sticks instead it’s the study Doktor Avalanche sat grimacing at the back of the stage. With its flickering lights, the Doc is the only loyal member of the band and has seen it all in this strange career that has had more dark and weird moments on its own battery-powered trip into the heart of A.I. darkness.

These days the good doktor has a carer who waves his arms around in the air and looks after the sturdy tech end of the Sisters armoury. It’s this marriage between the tech and the guitars that is, of course, core to the band. That nod to the technological dance floor of the eighties and the embrace of the warmth of old school guitars and detail of rockist slurs made the band so defiantly modern when they merged in post punk and to this day it still works for them. Oddly the embrace of rock at the beginning of their career was always a dichotomy, and to this day there is a love/hate thing going on with the form.

With far fewer bands using drum machines these days it adds to the odd kilter nature of the band. In Sisters world, the drums don’t provide the power and it’s left to the sparse clicking rhythm. This is not the flesh and muscle of rawk but just pulsating electric clanks. It is enticing and off-kilter and takes a minute to tune into. The Sisters don’t push air – they push buttons instead, but it’s that robotic backdrop that adds to their quirk and takes them away from cliche and into a detached clank and grind that is very much part of their thing.

Rock itself is about strutting extroverts and bombastic ritual and there are certainly elements of that at play here – the two guitar players that flank the mysterious Andrew Eldritch know all the rock god poses and play great.

In many ways it’s this extrovert display that further underlines the black hole of introversion the makes the band so fascinating. In an interview for Louder Than War in 2016 Andrew told me that “my terror is other people’s entertainment”, and apart from a great title to a long awaited new album that may never come out, it perfectly captures the sheer fascinating oddity of the band. If punk and the Sex Pistols were playing the same card – the high IQ but terrified singer debunking Jagger rock – then the Sisters are very much from the same school.

Like the aforementioned black hole the Sisters suck all the audience energy in. They are not here to merely entertain you. This is a post punk period band asking questions and confounding expectations.

It’s not an easy show – for sure there are singalong moments, hands in the air communal celebrations of the band and their songs, but Andrew Eldritch doesn’t believe in making it easy. There are few bands in rock music who command such levels of intense devotion and intense debate amongst fans. There are few bands who were so influential who stepped away as the Sisters did before going on strike and not releasing an album for three decades.

It’s not like they disappeared though. They kept on touring and writing new songs…over 20 new songs that have never been released and sit around on YouTube or on online bootlegs, left as mere flickering shadows and high decibel ‘what ifs’ before disporting from the band’s own set.

Can you get any more enigmatic than that?

And yet you feel that maybe they are about to release something.

There is a batch of great new songs tonight that are as strong as any in their canon, and Eldritch is rumoured (and rumours already swirls around this band)  to be vocals on an older release after decades which means his voice will be recorded and released again.

Then there are the new songs…

There is the striking instrumental currently called, er, Instrumental that works in its current form but you can’t help wondering and hoping that it will eventually have vocals and lyrics. Maybe it’s an exercise in Andrew’s minimalism – stripping things bare and discarding with all the words altogether.

There is the genuinely creepy and dark Show Me On The Doll with its typically multi-way layered and clever wordplay from the singer as he delivers the up-temp piece surrounded by hooky guitar liners. There is also Black Sail – a song so new that it was debuted tonight. Eldritch intros it with “this one is going to be a bit weird as we haven’t really figured it out yet” before the perfectly-executed acoustic guitar-driven piece of atmosphere is delivered. It rides along on a spooked guitar figure, and Doctor Avalanche’s brooding rhythms and a verdant acoustic guitar flourish. Eldritch’s vocals are between baritone and whisper as he delivers something spectral. The song sounds like a cinematic piece – I’ve often wondered why Andrew doesn’t write film soundtracks – he has the command of the atmospheres and cinemascope vision thing to make it work. This, combined with the dislike of playing live, should surely sees him as the next Clint Mansell-type wizard figure holed up in his home studio delivering these spook pieces.

But Genevieve is another song getting its first airing tonight. This is a swirling piece of drama with Eldritch’s voice defying the naysayers and sounding as rich and nuanced as decades ago as her delivers a song that harks back to the so called classic period as it drips a dark treacle melody and a tension and dynamic.

Finally after years of new songs that were played and then discarded, it feels and sounds like a band that is ready to deliver the album. There is a potential late period masterpiece here – and the times are right. All those years of foreboding and political unease from the Eldritch came to fruition. He told me in the 2016 interview that the much-mooted album would be released when and if Trump got in. Like Trump he didn’t deliver that time but he has another chance to be true to his word when the presidential orange fraud gets back in for his second term.

These new songs sound great – all they need is bass lines. Doktor Avalanche plays most of the bass lines from his digital corner. But maybe a genuine bass cutting through would make for perfection. I’m biased of course, I love the bass and play the bass in the Membranes. On the other hand this could be because the bass was so key in so many Sisters songs. If they ever record I’ll come down to the studio with my Fender P and stick down the bass lines – for nowt. I can hear the malevolent tendrils of bass lines as I stand there mesmerised by these new tunes that rank amongst their best. The wilful swirl delivered by the black hole band.

And yet we kind of need this black hole live — this enigmatic and strange trip where there is no concession to showbiz. The Sisters fans are always in open argument and open revolt about the band. The message boards brawl over whether are great or awful and yet every tour the fans turn out in bigger numbers than the year before.

There is something magnetic about this thing even for people who shout loudly about being in denial of its dark clouds.

By the time they get to anthemic and sprawling magnificence of This Corrosion the whole place is up in arms. Literally, it’s a sea of arms waving about and mass singalongs for an acidic song. It’s a great piece of music and a classic of its time – epic in its scope, brutal in its adherence to the dance floor and oddly very un-Sisters in its encouragement of the communal singing – a dark apocalyptic masterpiece, This Corrosion sounds as menacing and brilliant as ever.