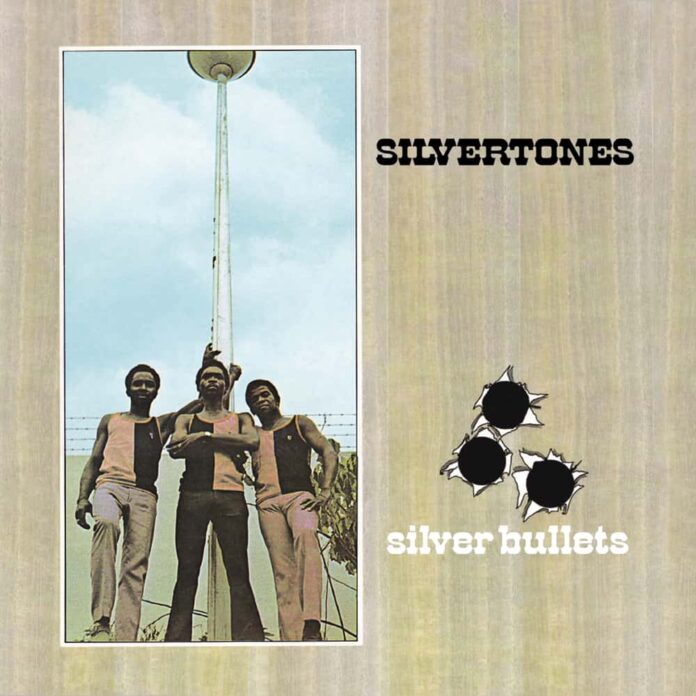 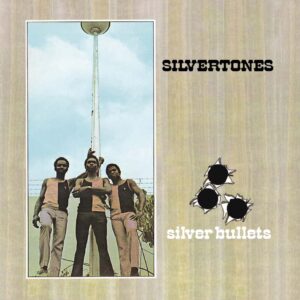 Reissue of The Silvertones 1973 debut album recorded with Lee Scratch Perry, the first LP to have its rhythms set down at his Black Ark studio. This release comes with bonus tracks of all their other recordings for Scratch and band member Delroy Denton’s two single sides…Ian Canty silver surfs…

By the time of their 1973 debut LP Silver Bullets, vocal trio The Silvertones had been making music for nearly a decade. Keith Coley and Gilmore Grant became friends when both settled on the east side of Kingston. The pair began to sing together in the early 1960s as a way of entertaining themselves and their local neighbourhood. The arrival of Delroy Denton later took things on a stage, with his distinctive and powerful voice plus musical talent making the band complete.

The fledgling outfit then did the usual Kingston shuffle through the capital’s main producers, recording successfully for Duke Reid in the ska era. They scored a Jamaican hit with True Confession, the song that salvaged a potentially unsuccessful audition for the Duke. Later on, they also set down tracks with Coxsone Dodd, Clancy Eccles and Sonia Pottinger among others. They were also credited on disc under a number of aliases, most prominently The Valentines, under which name they released a true rude boy rocksteady classic in Guns Fever. They first came into Lee Perry’s orbit in 1968 when they recorded a version of Jerry Butler’s He Will Break Your Heart, which was retitled He Don’t Love You. The tune appeared on the flipside on some of the editions of Lee’s ground-breaking People Funny Boy single and The Silvertones also recorded a couple of other cuts for his Upsetter label in 1969.

Four years passed before The Silvertones hooked up again with Lee for the Silver Bullets album. They voiced Silver Bullets at King Tubby’s studio, but the rhythms were cut by Lee Perry at his Black Ark facility, which was brand new at the time. Indeed, it was the first album to have its music set down there. At this time Scratch had yet to truly embrace the more outrageous production tricks he subsequently became well known for. This may have led the record to being not as highly regarded as some of his late 1970’s production jobs at the Ark.

Even so, the LP is made up of many pleasing and soulful examples of proto-roots reggae that play on The Silvertones’ strengths in close harmony and baritone vocals. However, a couple of numbers included are really by other artists and perhaps slightly devalue the project. The Upsetters’ dub version of Rejoice Jah Jah Children Rejoicing Skank is par for the course as dub was just coming into its own, but Dave Barker’s set-closer Are You Sure seems to have been tacked on the end of the album solely to bump up the running time.

These misgivings aside, Silver Bullets begins with a car being revved and beeping its horn, plus brief male/female chatter. It is a typical Perry touch really, but when the song kicks in I’ll Take You Home has a jolly, rubbery rhythm that lets The Silvertones excel, with Denton’s assertive voice out front and the backing sweet and light. Their vocal group sound owed a lot to r&b and doo-wop and a lot of what is featured on Silver Bullets is like rocksteady reimagined for the 1970s.

Early In The Morning has a fine groove to it with good guitar work and the confidence and poise of The Silvertones is clear for all to hear. They manage to meld The Archies’ bubblegum tune Sugar Sugar into a convincing slab of early 70s reggae and Rejoice Jah Jah Children itself is a real pearl. This extremely cool, socially conscious song was written for the band by Pauline Morrison and is as good an example of roots reggae as you are likely to come across.

That’s When It Hurts, a Ben E. King number, is blessed with great performances which show the rhythm & blues leanings that was at the heart of all The Silvertones did. The self-penned Soul Sister, a smooth tale of relationship strife, is perfectly realised and Rock Me In Your Soul features sparky playing and some dramatic vocals. If Sweet And Loving Baby looks squarely to soul music for its inspiration with its James Brown grunts, it is still a joy to listen to. The gospel-flecked He’ll Break Your Heart ends The Silvertones involvement on Silver Bullets in fine style, but although Dave Barker’s chant Are You Sure doesn’t really belong here, the synthesiser squelches alone make it worth hearing.

Apart from the album itself there is plenty to love among the bonus tracks included here. Cool keys herald their 1969 single Kiddyo, a Brook Benton cover and Take Time Out has a lovely, lazy swing to it. Delroy Denton’s solo single Oppression is roots done just right and Financial Crisis shows the band as adept at social comment as they were for love songs. This one gets its own smart dub version too. Give Thanks, another Denton roots number, is interesting musically and well sung and the reggae-fied Waltzing Matilda Skanking Matilda grants the listener a good deal of fun.

The final two offerings are lovely unguarded moments, with the band just stripped down to voices and guitar. Sweets For My Sweet is a good attempt at the old beat favourite and closing track Feel Alright comes direct from a rehearsal and gives a clear hearing to harmonies of the band, with just the ringing guitar accompaniment from Denton.

Silver Bullets, despite containing two tunes that didn’t have anything to do with them, is still The Silvertones at their best and a real triumph. That it was the start of Lee Perry’s run at Black Ark is important, but the main thing is how enjoyable and brilliantly fresh the album remains. The bonus tracks contain plenty of interest and David Katz’s detailed sleeve note is packed with insight. It all adds up to a great reissue of an album which deserves to be heard.