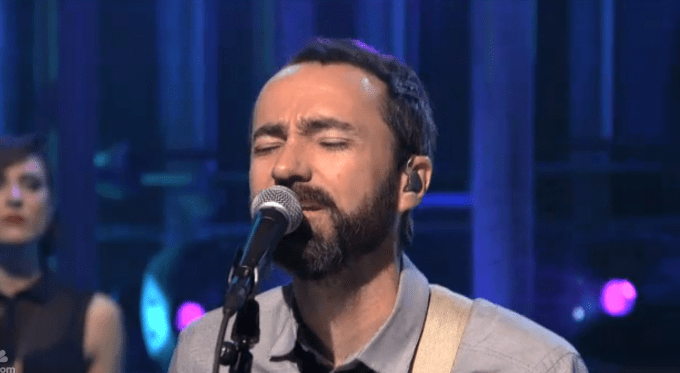 TonightÃ‚Â is the Shins’ first UK gig in four years.Ã‚Â  Potentially, they are a very different proposition, with a new line-up necessitated by singer-songwriter James Mercer’s dictatorial decision to sack his entire band.Ã‚Â  There’s a lot riding onÃ‚Â tonightÃ‚Â ”â€œ does the new line up work? How will the old songs sound?Ã‚Â  What about the new ones?Ã‚Â  And will the current line-up make it to the encore?

The Shins take to the stage on the stroke of half nine and unleash the Big Guns straight away with “Kissing the Lipless”Â.Ã‚Â  The new members take a while to warm up but soon gain confidence when they launch into songs from new album “Port of Morrow”Â.Ã‚Â  It’s a decent record and possibly Mercer’s poppiest to date, which is no bad thing in my book.

“Simple Song”Â, the first single off the new album, and CLASSIC Shins, isfollowed up immediately by another newie “Bait and Switch”Â, this one having a cool groove to it as well as the frontman’s signature ball-breaking falsetto.

Now that the band has found its stride and the fans are on their side, “Phantom Limb”Â is brought out of the bag. The Shins have always been such a perfect group on record that it must be hard to replicate the harmonies live. However, the “ooohs”Â and the “oooh-wah-ooohs”Â are spot on and make youfeel kind of fuzzy inside.

Perhaps tonight’s setlist is a little heavy on new songs for a gig thatfalls only three days after the release of a new album.Ã‚Â  However, having rinsed the record already, I’m quite happy with the overall balance.

The Shins leave the stage after an hour but before they do, they hit us right between the ears with a triumvirate of stellar tunes from their excellent first album, “Oh, Inverted World”Â.Ã‚Â  They really give it some during “Caring Is Creepy”Â, which sounds absolutely epic this evening.

The pace slows when Mercer reaches for his acoustic and delivers anachingly beautiful rendition of “New Slang”Â.Ã‚Â  This is the song that Natalie Portman said in the film “Garden State”Â would change Zach Braff’s life. It did.Ã‚Â  But far more importantly, it’s also the name of a weekly indie night in Kingston upon Thames.

“One by one all day”Â brings the set to a close with a fabulous extendedjam driven along by dense feedback and the odd synthesiser bleep for good sonic measure.Ã‚Â  The band leave the stage while a continuous beat pulsates like a heartbeat through a smoke machine haze, building suspense before they come back out to all-round rapturous applause.

The encore consists of two more new songs (“September”Â and title track“Port of Morrow”Â) plus set closer “Sleeping Lessons”Â, which provides an energetic end as offbeat handclaps and awkward dancing break out almost universally in the crowd.Ã‚Â  Ah, Shins fans.

Essentially, there was nothing for the faithful to fear.Ã‚Â  James Mercer, to all intents and purposes, IS The Shins.Ã‚Â  He is also a genius.Ã‚Â  His voice wraps you up in cotton wool and lets you know that everything is going to be alright, while his melodies hit you like a sugar rush.

The new players backing him up are certainly up to the job.Ã‚Â Ã‚Â TonightÃ‚Â was one of those gigs where you spend the whole ninety minutes lost in melody as all your cares disappear.Ã‚Â  The only way to prolong the euphoric feeling of pop escapism is to go straight home and listen to more.Ã‚Â  The Shins – they’ll change your life.