Home Blogs the Shend from The Cravats play big London show with the Membranes... 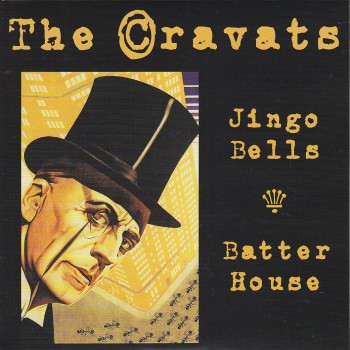 The Cravats play a big London show with Membranes (plus their 20 piece choir) Steve Ignorant and The Wolfhounds on Friday October 5th at the wonderful Islington Town Hall. All details and tickets from this link!

The recently reformed band made a welcome return a couple of years ago with a series of intermittent gigs that were a reminder of their quixotic and fantastically weird take on post punk. To top that they have released their first single for decades which is getting as much radio love as they if back in their days of being big John Peel faves.

then join all their social networking below and have good look at the Shend’s favourite albums – a great list with some really in depth explanations of their genius.

The new single Jingo Bells / Batter House is available here and as a digital download: https://www.overgroundrecords.co.uk/jingo-bells/

Shend ‘As a kid the Shend home wasn’t a musical one. We had a mono barely-electric record player and a few scratched 78s that my dad had brought over from Austria. The only one of which I ever played regularly was ‘Praise The Lord And Pass The Ammunition’, a song for the troops by Kay Kyser in 1942. It was a ridiculously jolly tune for people who were about to die.

The family also owned two 7″ singles. Wooden Heart by Elvis singing in German and Walk Tall by Val Doonican which I found strangely inspirational as a child (and strangely still do).

My own record collection began in 1965 when I received the mini LP ‘Introducing Thunderbirds’ for a Christmas present. I still own it and the sleeve is emblazoned with the legend, ’21 minutes of adventure’. A phrase I have lived my life by ever since as 21 minutes is kinda the best you can hope for.

Choosing an all time Top Ten is obviously impossible as there are hundreds that are faves for different reasons scattered throughout my existence so I have decided to pick ten that I still play regularly and that shaped my life fundamentally and / or musically, therefore they are all flipping old. This is a shame as it excludes the plethora of albums I have welcomed into my heart since, but tough bananas!

Also I did consider naming 10 totally made up LPs that no one had ever heard of so folk would think I’m really hep and cool but on reflection that would have involved imagination and no doubt someone would still say Bowel Meringue’s, Wardrobe Sock came out in ’68, not ’69.’

Anyway, in no particular order.

To an impressionable 14 yr old this was fantastic. The single was out as the summer hols approached and even though I was more interested in new pedals for my bicycle than overthrowing the system back then, the LP seemed to stick a finger up at everything. It annoyed my parents, he had a girl’s name, wore make up and the whole band looked like they’d just survived an explosion in a clown factory. Luney Tune had this creepy menace to it and Public Animal No. 9 was a whole Cagney film in a song.

Producer Bob Ezrin shaped Alice Cooper into genius I reckon and Alice should never have got rid of that original band.

The track School’s Out still gets a blast at least once a month at Shend Towers.